For the twelfth year in a row, the gold price in terms of US dollars rose in 2012.

Gold climbed 7.0%, so an arithmetic average of its annual rate of appreciation for the last 12 years when measured in US dollars is 16.8%.

Gold also rose in 2012 against all of the eight other major world currencies presented in the following table. Gold has been appreciating at double-digit annual rates on average against these currencies as well. 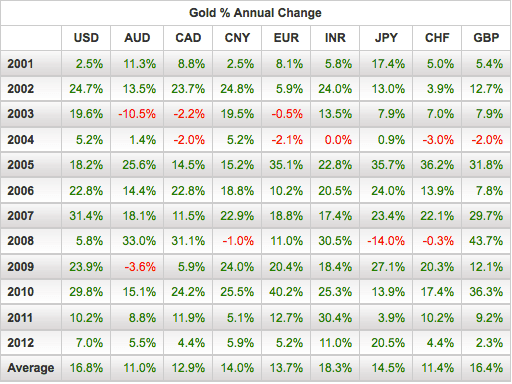 So when the gold price is rising, wealth that has already been created from people’s hard work and held by them as purchasing power in a national currency is simply being transferred from those unfortunate people to everyone who owns gold. In other words, their wealth (their purchasing power) is being transferred away from the national currencies they hold to gold, and has done so over the past 12 years at double-digit annual rates on average.

I will again repeat here my comment from past year-end summaries that clearly explains the reason for owning gold:

“As long as governments and central bankers pursue policies that erode the purchasing power of the currency they manage, gold will be exchanged for that currency at an ever rising price.

Gold is the numéraire – the measuring stick – that illustrates how badly national currencies are being managed. Therefore, unless government policies change – and I see no prospect of that – the price of gold will continue to rise.

Consequently, it still makes sense to stay with the same strategy that we have been pursuing throughout the last decade. Continue to accumulate gold under a steady cost averaging program. Make gold purchases part of your regular budget, and view gold to be your savings. As I have said many times – but it is always worth repeating to understand the underlying logic of this gold accumulation plan – saving money is always a good thing, particularly when it is sound money. That conclusion is clear from the above table.”

The silver price also rose in 2012 when measured in terms of the same major currencies. Silver’s price appreciation is presented in the following table. 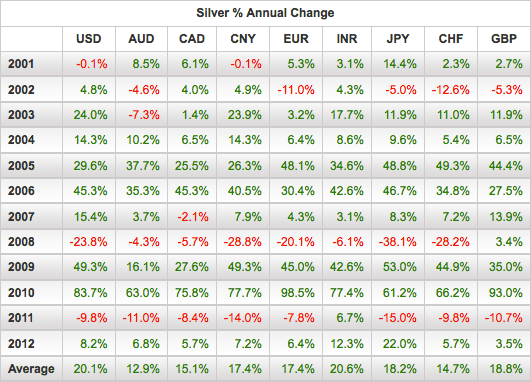 Silver has average annual rates of appreciation in all nine currencies that are higher than gold. So the higher risk of owning silver, as evidenced by its greater volatility, has resulted in more appreciation than gold, as would be expected – higher risk should result in a higher appreciation. As a result, silver also fits well within a long-term accumulation plan if you are prepared to accept the volatility that comes with it.

A year ago gold and silver experienced a precipitous fall in sentiment as 2011 came to a close. This past year ended the same way, but the outlook for the world’s currencies is not improving. National currencies are not a viable alternative for saving money or meeting one’s liquidity needs. So the case for owning physical gold and silver remains as strong as ever.

To conclude, we should assume that gold and silver will both appreciate again in 2013. After all, governments and central banks are pursuing the same policies that have been destroying the purchasing power of national currencies for a decade. And the interrelated sovereign debt and bank insolvency crises remain a festering wound in the global financial system, further threatening the value and usefulness of national currencies. Owning physical gold and physical silver enables you to have wealth outside the global banking system, which for years has been and today still remains an essential objective for everyone.

The world’s experiment with fiat currencies is now four decades old and failing. It will inevitably end like all of history’s previous experiments with paper money – badly. Importantly, we also know from monetary history, as well as logic, that physical gold and silver will preserve your wealth in these tumultuous times.