Apr 13, 2022·Goldmoney Insights
Over the past weeks, gold prices showed a remarkable resilience to the relentless rise in both nominal and real-interest rates. For the first time since 2020, gold prices are now reflecting slightly higher long-term inflation expectations than what is embedded in TIPS (breakeven inflation). However, we think overall markets are still much too optimistic about the Fed’s (and other central banks) ability to choke off current high inflation rates with aggressive monetary policy. We believe the Fed will stall economic activity before it can choke off inflation, which will force the central bank to reverse course long before it reaches its target interest rate. Current long term inflation expectations (2-10y) imply that investors are too complacent as they attribute near zero probability to such a scenario. Once confidence in the Fed’s ability to rein in inflation erodes, real-interest rate expectations will move lower again. The result will be a sharp repricing of gold.

In February this year we published a report with the title Gold defies hawkish rate environment (February 02, 2022) in which we highlighted the discrepancy between rapidly rising real-interest rates and the resiliency of gold prices. Over the past years we have extensively written about the inverse relationship between real-interest rate expectations and the gold price (see Gold Price Framework Vol. 2: The energy side of the equation, May 28, 2018) (see Exhibit 1). 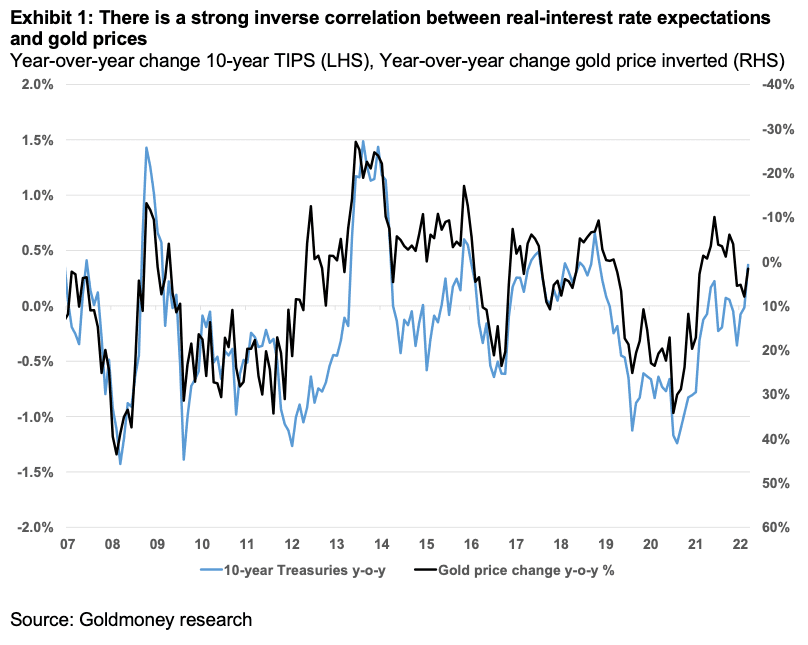 Real-interest expectations (as observed in Treasury Inflation Protected Securities (TIPS) yields) had been on the rise since they bottomed out in December 2021. By the time we published our February report, 10-year TIPS yields had moved from their record low of -1.2% to -0.6% in just two months, as the market sharply reassessed the outlook for Fed rate hikes and a rapid tapering of Quantitative Easing (QE). Yet gold prices defied these pressures and remained stable. In fact, gold was up over the time frame by the time we published the report.

Fast forward and the rate (and QE) environment looks even more bullish. 10-year TIPS yields are now at -0.1% and on a steep upward trajectory. QE has not just ended, but expectations are for the beginning of balance sheet reduction (negative QE) in the near term. Even some of the historically most dovish FOMC board members are calling for rapid balance sheet reductions. 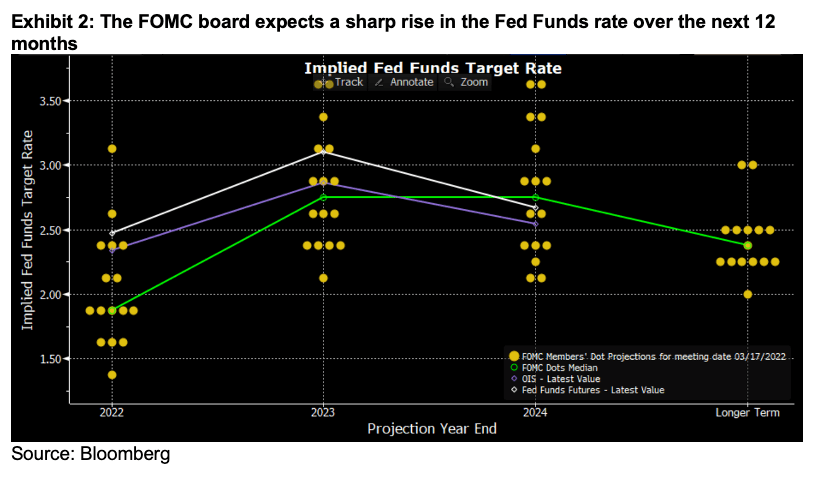 This all comes on the back of multi-decade high realized inflation. This has also lifted longer-term inflation expectations as observed in 10-year TIPS. 10-year breakeven inflation is now at a whopping 2.9%, the highest level since the first TIPS were marketed in 1997. 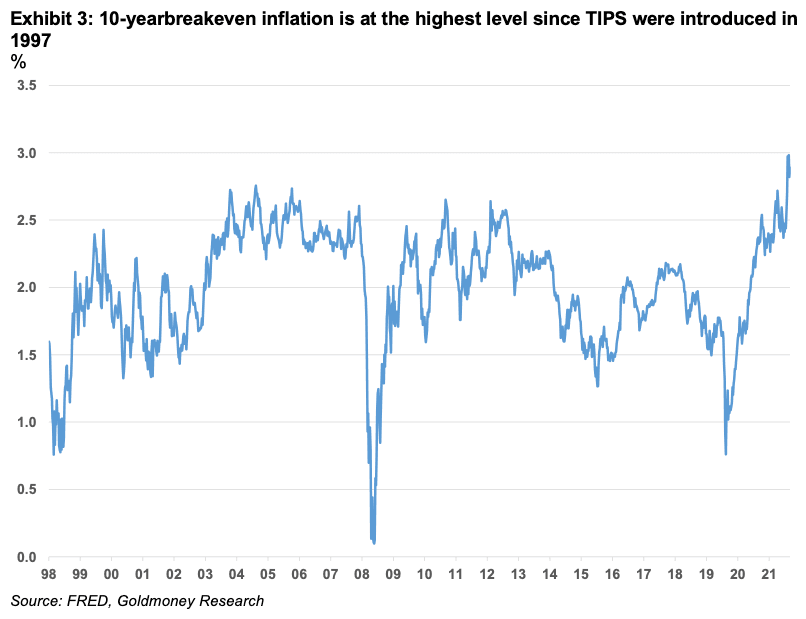 However, nominal yields have been rising faster than implied breakeven inflation, with the result that long term real-interest rate expectations rose over 1% in less than four months. 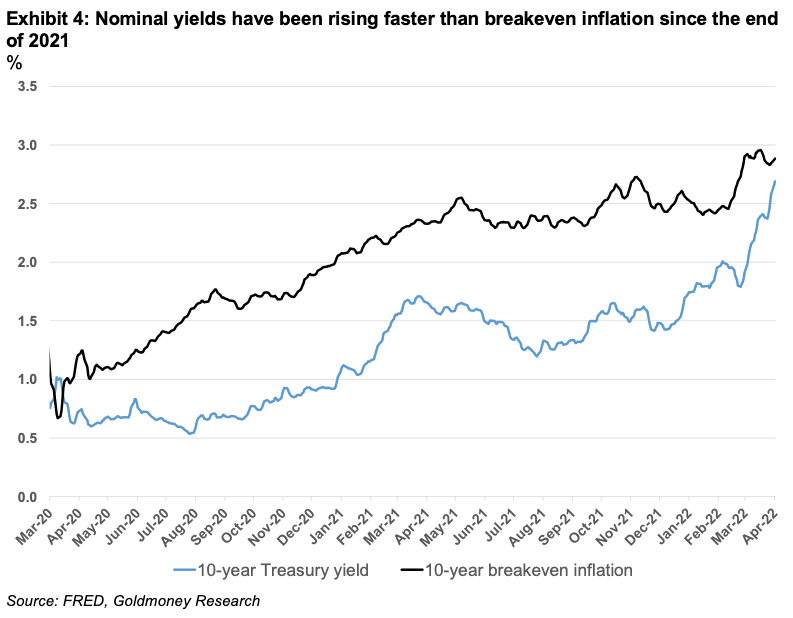 While all this should be very bearish for gold, gold price continue to weather the rate storm. Gold prices were $1,829/ozt by the end of December 2021, when TIPS yields were -1.1%. Today TIPS yields are 1% higher and gold is $125/ozt higher. 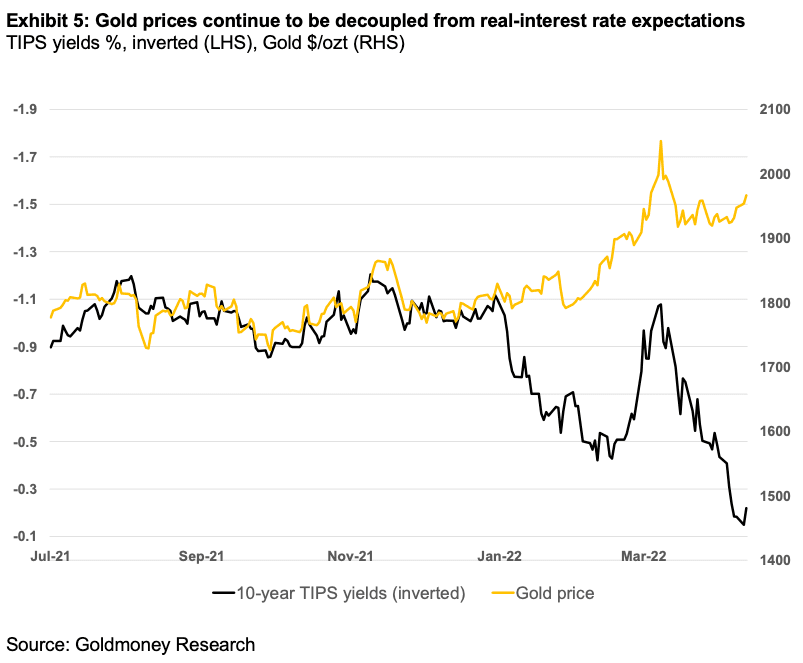 In our February report, we presented some of our thoughts why gold prices did not drop despite the rise in real rates. We pointed out that the Fed had been buying TIPS at a faster rate than nominal treasuries, relative to their respective market size. This had the effect that TIPS yields were pushed down more than nominal yields when QE was strong, and implied inflation expectations were distorted to the upside. This had the effect that gold prices seemed too low relative to TIPS yields while the Fed was buying assets. We can see this effect playing out in our gold price framework, where gold prices underperformed predicted prices for all of 2021. At times, realized gold prices were $200/ozt below predicted prices (see Exhibit 6).

Once the Fed began to taper and eventually end QE, the opposite took effect: gold prices remained stable and even moved higher even as real-interest rate expectations began to rise.  This lead to a convergence of realized gold prices and model predicted values (see Exhibit 6). We concluded in our February report that gold prices reflected the markets’ “true” long term inflation expectations rather than the breakeven inflation rates implied from TIPS yields.

Interestingly, even as QE has now ended a while ago, gold prices continue to defy the continually rising real-interest rates. At the time of writing, gold prices exceed the model predicted prices by about $75/ozt. 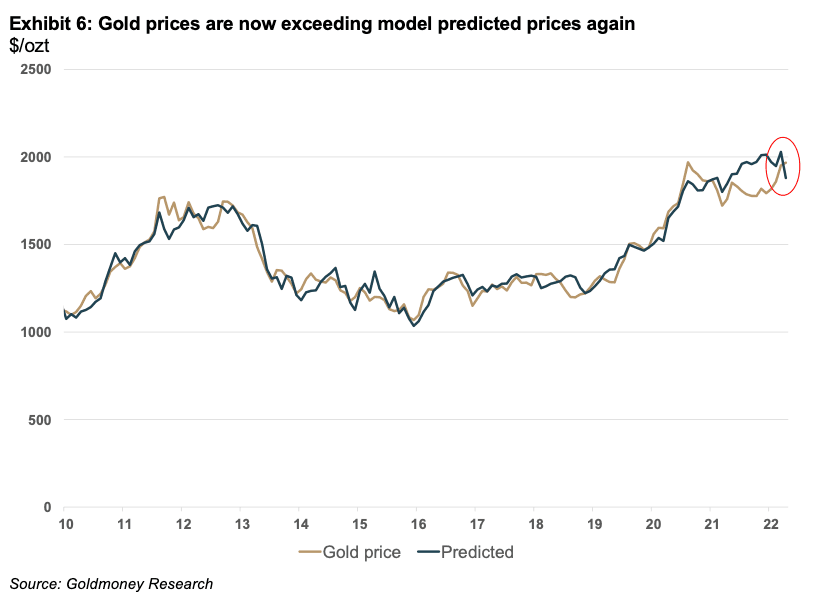 Importantly, both the TIPS market and gold prices are still discounting the risks that the currently observed high inflation rates are anything but transitory. Realized headline CPI inflation for March was 8.5% while 10-year breakeven inflation is still only 2.9%. 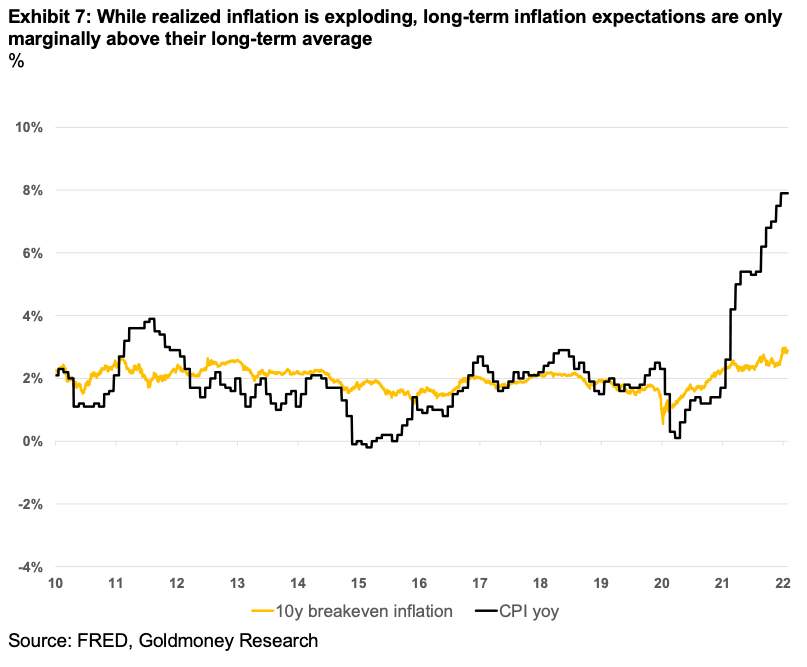 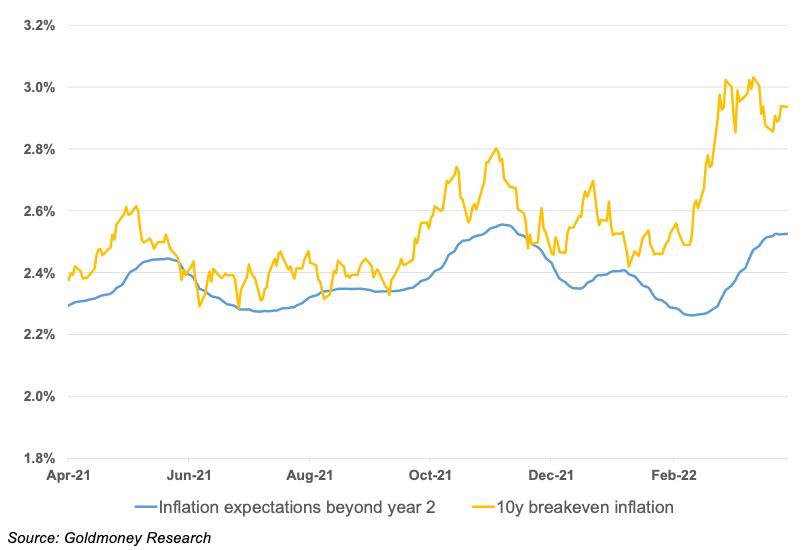 In our view, the TIPS market is severely underestimating the upward risks of future inflation. Gold is pricing in slightly higher long term inflation expectations, but in our view those are still much too low. We think the market is too confident that the Fed (and later other major central banks) will raise interest rates to whatever level is needed in order to choke off inflation. We think that we are in an environment that gives the central banks much leeway.

Central banks are currently finding themselves between a rock and a hard place. Energy shortages and supply chain issues continue to put a drag on economic activity. The recent widespread lockdowns in China will only make matters worse. At the same time, realized inflation in many Western economies are already at the highest levels since the 1970s. The Fed is leading the way and is raising rates at a rapid pace (rapid in comparison to previous rate hike periods) and several FOMC board members have become vocal about unwinding the Fed balance sheet.

But there are only so many times they can hike before they push the US economy into a recession. The rest of the world would follow. To make matters worse, asset prices are still at extremely elevated levels by conventional metrics. A worsening economic outlook coupled with higher rates and unwinding of QE could lead to a massive crash in asset prices (equities, real estate) which in turn would worsen the recession (negative wealth effect, mortgage defaults, credit crunch). While a global recession might lead to some temporary relief in regards to the supply chain issues, this might not even give a temporary relief to inflation. Ultimately we think central banks will be forced to end the hiking cycle long before they reached their designated goals (currently 3% by 2023).

We think a global recession will once again radically change the stance of central banks and there is a high chance we will see aggressive rate cuts and more QE (or potentially a successor to QE such as more stimulus checks or a form of UBI). The underlying conditions that led to the current inflation rates will largely remain in place and new stimulus and a renewed ZIRP or even NIRP environment will fall on fertile ground. Given the embedded inflation expectations over the 2-10 year horizon, the TIPS market is at the moment giving this scenario still close to zero percent chance. This means that also the gold market is giving this scenario close to zero percent chance. However, it appears that over the past few weeks, at least the gold market has been slowly warming up to this potential future given the widening gap between rates and gold prices.

The threat of aggressive rate hikes over the coming months coupled with the risk of a global recession may prevent a massive break out in gold for now. However, once confidence in the Fed’s (and other central banks) ability to rein in inflation erodes, real-interest rate expectations will move sharply lower. The result will be a rapid repricing of gold. 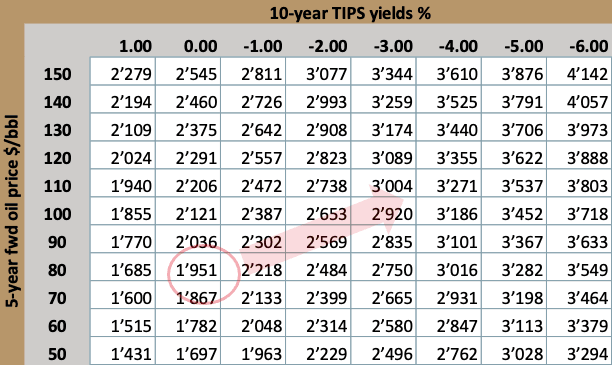