Precious metals, led by gold, consolidated recent gains on Monday and Tuesday morning before moving ahead strongly late on Tuesday during Comex trading hours. Gold has now extended its rise from the recent intra-day low of $1,252 the morning after the debt limit suspension, forcing a number of analysts to have a rethink.

This from Bank of America Merrill Lynch on Thursday: "It's time to turn bullish", and from UBS yesterday: "We see upside surprise risks on gold and silver in the years ahead". These contrast with Goldman Sachs' widely publicised recommendation earlier in the month that gold "is a slam-dunk sell", a recommendation that is now under water.

The other side of the gold price is of course the US dollar, and currency strategists are also being forced to rethink its prospects, given recent poor performance. The expected time-frame for tapering is being postponed, and more strategists are embracing the possibility there is no foreseeable exit from monetary expansion. Any initial thoughts that Janet Yellen as Fed chairman might be more hawkish than Ben Bernanke are being challenged. Furthermore, the revelations in the last few days that the US routinely hacks into the telephone conversations of its allies' leaders may come as no surprise to those familiar with security services' methods, but it is undermining diplomatic relations at a difficult time for the dollar.

There is a growing feeling the tide is turning against the dollar after the recent debt-ceiling crisis and therefore in favour of precious metals. Recent sentiment against gold could hardly have been more negative; and importantly gold has held well above the low of $1180 established in late June. Even gold-friendly analysts had lost confidence and have been recommending caution. It is at moments like this that experienced traders assess the vested interests in the market: if the overwhelming majority are saying sell or stay away, it is usually a reflection of their own market positions. In other words, the sellers have already sold and in future there are only bears left in the market looking to close their shorts, along with genuine buyers seeking an entry point.

The bottoming-out process for both gold and silver is clearly visible in both charts below, with gold extending its break above its two-month downtrend, and silver breaking up out of a diagonal triangle reversal pattern. Silver's technical position looks particularly positive, given that diagonal triangle sell-offs reflect an exhaustion of downwards momentum. 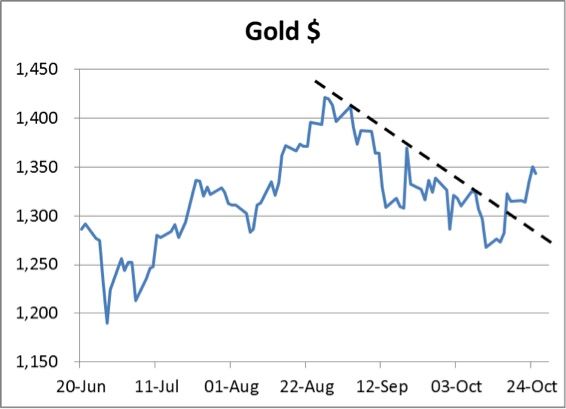 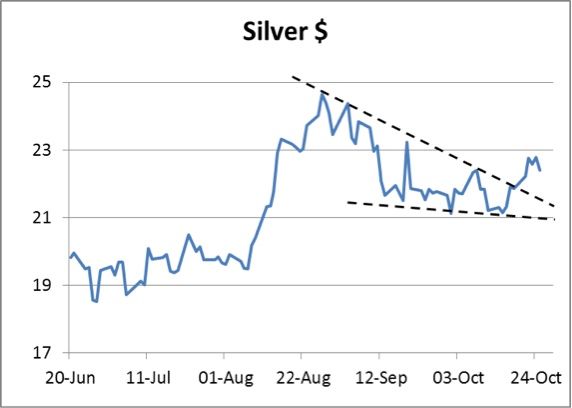