This was the week when we were reminded of the old tradering adage, that the first market reaction is often wrong.

On Tuesday, the morning after the US Government suspended non-essential activities due to the lack of a budget for the new fiscal year, the price of gold was smashed some $50, taking it to below the $1300 level to as low as $1280. At the same time the dollar weakened, which logic tells us should have driven gold better. The following day the fall was almost completely reversed and silver even ended up with a small net gain over the two days.

There really is no convincing explanation for the original price action. We can suggest technically-driven robots were responsible, or that with quarter-end book-squaring over, new bear positions were opened at the earliest opportunity. We can also note that Tuesday, the day the Commitment of Traders’ report is made up, is often a bad day for precious metals. Or there is another alternative reason: the Chinese are on holiday this week so their buyers are absent. Perhaps all these factors worked together.


The important point to note is that while markets generally were turbulent precious metals have broadly held their ground. And whatever games are played in the paper markets, underlying physical demand from Asian markets remains strong. Look for example at Chinese weekly demand, shown in the chart of Shanghai Gold Exchange deliveries, through which all officially imported bullion is delivered. 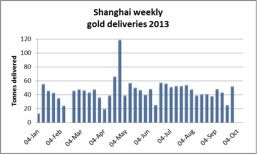 The weekly average delivery this year has been 43.87 tonnes, matching global mine supply ex-China which averages 44 tonnes per week. Add in Hong Kong, and the rest of the world has to sell down its gold holdings just to supply China’s private sector demand. This does not include unrecorded demand from the mega-rich buying directly in foreign markets. Furthermore, this week China announced it would liberate the market further, granting more dealers licences to import and export gold, leading to yet more potential demand.

This is ignored by capital markets in the West, which are dominated by speculators pursuing very short-term objectives, and who appear to have lost sight of how cheap gold has become priced in ever-inflating quantities of dollars. But when this happens, markets eventually correct the anomaly – always. Meanwhile the short-termists will point to overhead supply for gold at $1330-50 that needs to be cleared before a bullish case can be considered.

There is likely to be increasing concern over the US Government’s budgetary impasse, which is expected to lead to a potential default in two weeks’ time if not resolved. The assumption is that the problem will be resolved, because the stakes are too high for it not to be. However, that will not stop tensions rising so long as a resolution has not been agreed.

Otherwise next week looks reasonably quiet for statistics, and so long as the US Government shut-down lasts, many US statistics listed here might not be announced.