The gold price moved sideways for most of the week, capped at just under $1,340, before challenging support at the $1,300 level on Thursday night UK time, after a day when US Treasuries fell heavily on a bullish Institute of Supply Management report.

This showed a much better than expected pick-up in manufacturing, and crucially for Fed-watchers, employment. With Non-Farm Payrolls due to be announced today the bears are looking for good figures, so overnight by this morning gold had been taken down into the $1,280s.

There are real or imagined signs that consumer demand for big-ticket items such as autos and electronics is picking up. I go into this and its durability in my article for GoldMoney this weekend. Furthermore this week’s statistical revision to the US’s GDP numbers, which suddenly makes things look better, might well have been timed with growing consumer confidence in mind.

The market assumption is that economic recovery leads to higher bond yields which make gold expensive to hold. This would be true if investment funds were significantly long in gold, but they are not. However, it doesn’t stop speculators adding to their short positions.

The chart below shows the net position of the largest four traders on Comex, who are the most active bullion banks, and it can be seen that they are long a record net 54,779 contracts. 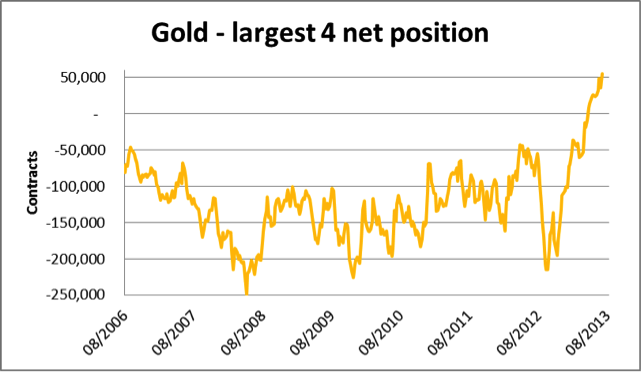 One might ask why don’t these bullion banks ramp the price up, forcing a bear squeeze? The likely answer is that they also run unallocated accounts in London on a fractional reserve basis, so are still net short. Only we don’t know how short.

In other news GoldMoney raised a bit of a stink over the Bank of England’s gold custody position. Having said they had the equivalent of 505,000 400-ounce bars at the end of February, in an app put up on their website the BoE revised this figure to “over 400,000”. The difference is important, because it suggests that as much as 1,300 tonnes has been shipped out, a quantity similar on our rough estimates bought by private individuals world-wide after absorbing estimated ETF sales, mine and scrap supplies over the same period. Interestingly, no denial was forthcoming, nor any suggestion that the position had not materially changed.

This brings us to the Gold Forward Rate (GOFO), which is still negative. When GOFO is negative, it means the gold lease rate is more than LIBOR, indicating a shortage of gold for leasing and therefore for delivery generally. This is confirmed by stories of large premiums in the Middle and Far Eastern markets. GOFO has been negative for 19 straight days for one, two and three month forwards, which is unprecedented. This unusual situation suggests that the supply of central bank bullion has slowed and the market has become stressed. Either another central bank will have to be persuaded to give up its gold, or the supply crisis will probably become uncontrollable.

Here are next week’s announcements.