Last Friday night (European time, 8 February) the Bank Participation Report for 5 February was released. This showed that US banks reduced their net short gold position by 12,886 contracts over the month of January, while non-US banks increased theirs by 2,887 contracts.

This is evidence that the US banking community is aggressively closing its short positions. A little of this was picked up by the non-bank commercials (mostly mines, refiners and processors) whose net shorts increased by 6,512 contracts to 56,573.

In silver they were unable to close down their positions – the US banks increasing their exposure by 7,956 contracts over the month. The non-US banks increased their short positions by 457 contracts, representing over 42 million ounces between them to give a total short position of 277,810,000 ounces, the second highest on record.

The two charts below show the contrasting positions for US banks in gold and silver. 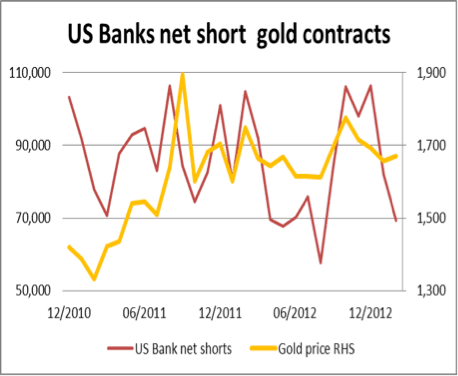 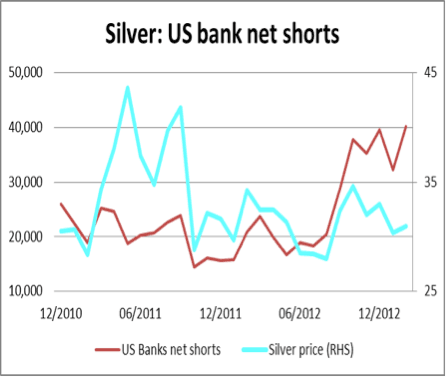 We can be sure that the massive short position in silver is causing difficulties for the banks concerned, because of the lack of physical supply. Therefore, the bullion banks have an exposure which appears to be out of control. While they frequently conduct bear raids (which are more successful in gold) they face the risk in silver of themselves becoming victims of a bear squeeze. Unusually, they have got themselves into this mess on a low silver price, and it is roughly double the short position than when the silver price was over $40. This being the case, when silver turns up the banks are likely to be very badly squeezed, throwing up enormous losses. Meanwhile, the non-bank commercials have kept a level head and reduced their net short position by 2,268 contracts to 3,616.

It is against that background that gold and silver prices declined this week, with gold falling about $30 to $1,630 level, and silver by $1.50 to around $30.25. Given that the bullion banks are trying to close down their positions, one would expect open interest to fall. Instead they have both risen, gold by over 25,000 contracts and silver by 2,936 contracts, indicating that buyers are taking the opportunity to accumulate at these low prices. We look forward to next week with interest.

Will the developing currency instability affect precious metals? The EU establishment favours a lower euro; we Brits favour a “competitive pound” (so long as it is not “competitive” enough to destabilise the gilt market); the Japanese want to stoke up some inflation; and the Fed would perhaps like a little as well. Not all are going to be satisfied. Next to the currency debate, next week’s economic calendar looks rather tame, but here are some announcements to look out for.

On Monday the eurozone’s trade balance is released – which will be interesting to those following the debate about euro strength – followed on Tuesday by the eurozone Economic Sentiment Indicator. On Wednesday we have UK average earnings and the minutes of February’s MPC meeting. From the US we get building permits, housing starts and the Producer Price Index, plus the Fed’s minutes from the end-January meeting. The eurozone’s Flash Consumer Confidence reading may also generate some comment.

On Thursday the US CPI will be announced, together with initial claims (usually an opportunity for volatility in precious metals), leading indicator and the Philadelphia Fed Survey. Friday will be a day of relative rest.