Precious metal prices continue to build a base, with increasing evidence of a shortage of physical metal. In London gold forward rates (GOFO) continue to be negative, which means that the market will pay you more interest on your gold than on your dollars. GOFO is telling us that strong demand for physical from Asia has cleaned out the London market.

The chart of one-month GOFO covering the period from before the banking crisis is shown below. 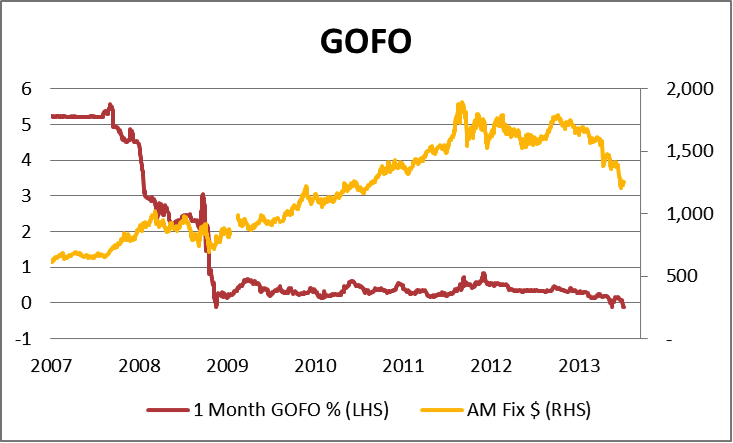 Before the banking crisis GOFO was positive, peaking at 5.3% in August 2007, reflecting a LIBOR rate of 5.6% giving a premium for LIBOR over the gold lease rate of 0.3%. This is normal. When the banking crisis hit and the Fed reduced interest rates to zero, one-month LIBOR fell to 1.4% on 20 November 2008, and one-month GOFO went negative for three days in succession and two-month GOFO for two of those days.

The collapse in GOFO coincided with the end of a 20% fall in the gold price, marking the start of the subsequent bull market when the gold price more than doubled. Today the gold price has also had a sell-off and GOFO has now been negative for nine days, indicating a higher level of price stress than in the dark days of the banking crisis. Furthermore GOFO is persistently negative for up to three months this time, signalling the shortage of deliverable bullion is more acute than in November 2008.

While the forward market in London is showing stress, the same is true on the Comex futures market, where warehouse stocks are dangerously low. The combination of the two with publicly recorded short positions on Comex is an explosive mixture.

The Managed Money shorts on Comex (mainly hedge funds) seem to be completely oblivious to a trap that even a junior trader would recognise. The longs have survived several debilitating bouts of margin calls, so can be assumed to be unshakable, and the bullion banks are now net long, which is highly unusual. The only speculators are the shorts of which hedge funds are the largest identifiable category, and they will be unable to close their positions at anything like current prices.

The UK’s Daily Telegraph recently published an article written by a UK-based hedge fund manager, which concluded that gold’s fair value is $240 per ounce. If his thinking is common to the other Masters of the Universe (as hedge-fund managers were once known) then it explains their actions.

There was an old saying at the London Stock Exchange: “Where there’s a tip there’s a tap”. In other words, if someone tells you to buy or sell something he is promoting his own vested interest. It is a pretty good rule of thumb.

My vested interest? I try to stick to the facts. Opinions from economists and traders are to be detected and avoided. I suggest you read the Telegraph article in that light.

Next week is a very quiet one as far as economic data announcements are concerned. They are as follows.