Gold market report: It has been a week of consolidation for precious metals

It has been a week of consolidation for precious metals, having started with gold at $1,380 and silver at $23.20, ending at similar levels this morning. The consolidation has been rather shallow, no more than 25% of the August rise in both cases, which is not surprising given underlying speculative short positions.

Markets are having difficulty making up their minds on how the weakness of currencies like the rupee will affect demand for physical metal. Does it mean that gold being more expensive in local currency will see a drop off in demand, or will it panic more buyers into the market? But as soon as you understand that Indians, Turks etc. are avoiding collapsing paper currencies it becomes obvious why demand remains strong irrespective of the dollar price.

This leads us to the farce that passes for India’s economic policy, which blames demand for gold as being at the root of all their trade deficit and currency difficulties. The fact is that economic policy is destroying confidence in the rupee, and the Indian public are fully aware this is happening. Attempts to shut off gold imports merely confirm the sense and urgency to buy. Furthermore, demand for silver has taken off as well – being the more readily available metal – doubtless contributing to the very tight conditions in the global market. The Reserve Bank of India is fully aware of this, has clarified the gold import rules, and it is thought that there will be some resumption of legal gold imports from now on.

Meanwhile in western capital markets there were signs on Thursday that the bear squeeze was moving to London, with prices moving up strongly for both metals before the New York opening. Figures from recent Commitment of Traders and Bank Participation reports confirm that while the US banks are long of gold, London-based banks are short, so we could see the interesting possibility that US banks will squeeze their foreign competitors.

The change in the position of the Other Reported COT category (sometimes referred to as the “Large Speculators”) in gold on Comex has been dramatic since the market turned. At the end of July they were net short 23,663 contracts, an all-time record. The following week they were net long 16,891 contracts. The action is shown in the chart below. 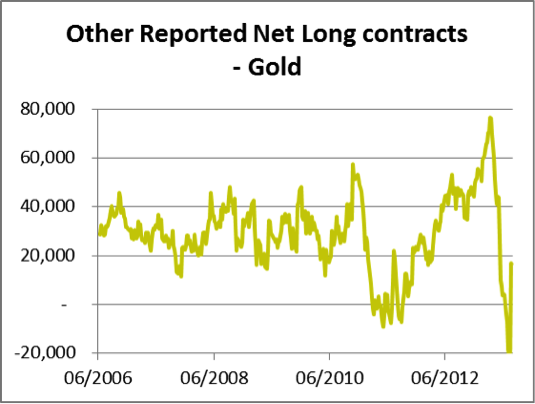 Using this net position as an overbought/oversold indicator it is clear that despite this enormous turnaround the net bull position is still less than the long term average of about 30,000 contracts. Given the improved sentiment in precious metals it would not be surprising to see this indicator double from current levels to that average, squeezing the bears in a market acutely short of stock.

My second chart is of the gold forward rates in London, which shows GOFO is now negative out to six months. The squeeze in London is extreme, and is probably similar to the position that led to the failure of the gold pool in 1968, for which records unfortunately do not exist. 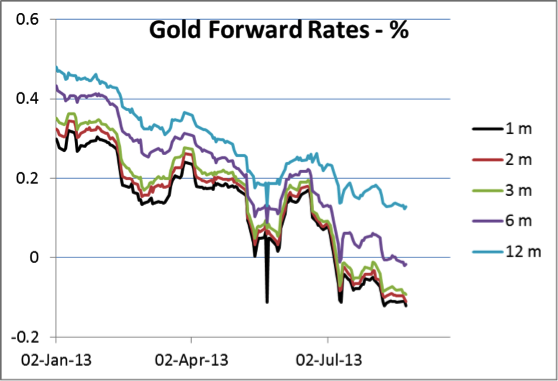 The spike-down on 22 May coincided with the market returning to the April lows driven by futures markets, when physical demand escalated for the second time. The recovery into June indicates leased gold flooding the London market, and the current unprecedented negative GOFO rates indicate that leased gold supply dried up a month ago.


This is the most bullish indicator for gold.

Look out for signs of stronger than expected economic recovery, particularly US GDP on Thursday. This has the potential to raise bond yields further.