Gold and silver prices declined during the first half of the week with gold falling $70 to a low of $1,274 on Wednesday morning. The $1,300 level was seen as support that failed spectacularly, and it was this that has influenced commentators and investment strategists. In financial markets bearish opinion overwhelms the few bulls. Apparently the physical demand that is draining the markets at current prices counts for nothing.

I am continuingly bombarded by research that purports to prove that the gold price is going lower. The arguments vary from erudite articles disproving correlation between gold and inflation to Elliot Wave Theory backed up by magic Fibonacci ratios.

As matter is to antimatter, this reminds me of 2000, when any student of crowd psychology who had read Charles Mackay’s classic account of the South Sea Bubble should have been aware of the parallels with the dot-com bubble at that time. So it is with the opposite extreme in gold and silver today: every speculator is sitting on the same side of a very cranky boat.

This is why today’s extraordinary market conditions – the bullion banks long on Comex against record short positions, and the negative gold forward rates for a whole month – are ignored. These reflections of negative crowd psychology are as extreme as you can get, with market sentiment as strongly negative as the dot-com sentiment was bullish 13 years ago.

My lugubrious views on fashionable value judgements were dismissed then as they are now. Today they are encapsulated in the chart of gold below. The yellow line is adjusted by the increased quantity of gold since January 2000 and the increased quantity of US dollar cash and deposits. This gives us the price of gold today measured in January 2000 money. 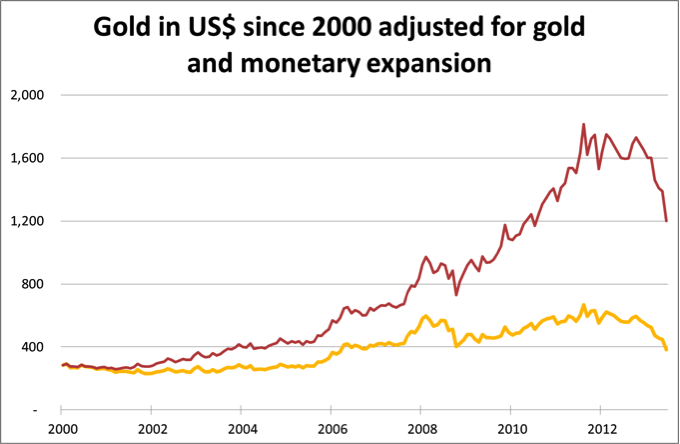 The red line is unadjusted. The yellow line shows that the adjusted price has only increased $100 from $283 in January 2000 to last month’s low of $1200 nominal. So from the time when investors revelled in the prospect of perpetual dot-com wealth to the realisation that our whole financial system is seriously, possibly fatally flawed, gold has actually risen less than 40%.


It is a common mistake to automatically assume the dollar, or any currency for that matter is unaltered for the purpose of price calculation. Not one piece of research that crosses my desk addresses this issue.

Here are next week’s announcements.