Gold and silver finished a poor week by getting hammered badly on Thursday. The rout started at 07.54AM UK time when a sale of 2,000 contracts was sufficient to force a 20 second trading halt on overnight NANEX futures and to drop the price by $10. This signalled that there were no significant buyers in the paper market, so the bears were easily able to drive prices down for a fall of $40 on the day. Silver was also badly hit falling $1.38, or 6%, which one can’t help feeling suited the very large shorts hoping to level their books.

However, there was no fundamental reason for this poor performance, other than the receding likelihood of an immediate call to arms over Syria and perhaps uncertainty about future interest rates, given more upbeat GDP statistics. Conventional opinion in Western capital markets is still biased against gold, a theme taken up increasingly by technical analysts who see support levels being violated. However, backwardation in the form of negative gold forward rates for one month delivery persists, indicating the market in London is still not operating properly.

The most important story is still about the demand for physical supplies from Asian buyers. And no wonder when you look at the quantity of bullion still being delivered through the Shanghai Gold Exchange, which is a reasonable proxy for Chinese private sector demand. 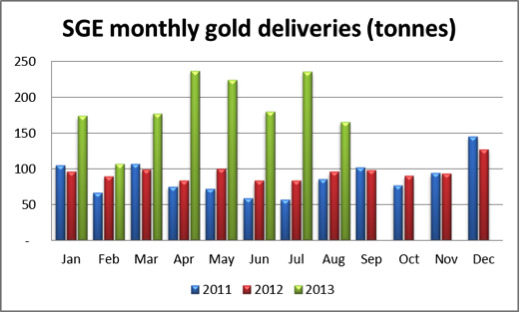 This year so far 1,500 tonnes have been delivered through the SGE alone (1,334 tonnes to July), and to that can be added Hong Kong’s gold imports, which for the first seven months to July adjusted for exports and imports to and from China totalled an additional 918 tonnes.

Hong Kong’s Merchandise Trade Statistics make fascinating reading. In the year to July (the most recent month for which statistics are available) Hong Kong’s net exports to China totalled 634.26 tonnes, leaving an additional balance of 604.234 tonnes imported by Hong Kong for domestic demand, jewellery fabrication and re-exported to countries other than Mainland China.

Given that all of China’s own mine production is absorbed by the Government and not included in trade and exchange statistics, seven-twelfths of global mine production from all other countries amounts to about 1,342 tonnes. Yet China’s Shanghai Gold Exchange’s physical deliveries plus Hong Kong in the first seven months of 2013 have absorbed 2,252 tonnes, leaving the rest of the world in an implied production-to-demand deficit of 910 tonnes. Then, of course there is the voracious demand for gold from India and all the other Asian populations not getting their gold through Hong Kong.


Asian demand represents an enormous drain on physical supplies from the West and is in sharp contrast with negative sentiment in Western capital markets. This market bifurcation is unprecedented. And what are the big bullion banks doing? They are not fools, they can see better than anyone else what is going on, and according to the Bank Participation Report the US banks have spent all this year closing down their shorts and going long.

A busy week ahead, with interest rates taking centre stage on Wednesday.