Open interest in gold has picked up by 19,000 contracts in US futures markets this month so far, and in silver by over 6,100 contracts – suggesting good support at current prices.

Last weekend the Bank Participation Report was released. This shows the outstanding net short position in futures markets for both US and foreign banks. As can be seen in the chart below, substantial progress has been made by both bank categories in reducing their overall short exposure to a combined 89,565 contracts (278.6 tonnes) from 140,958 (438.4 tonnes) last August. The tactics employed have been simple: put the word out to the hedge funds to short gold. 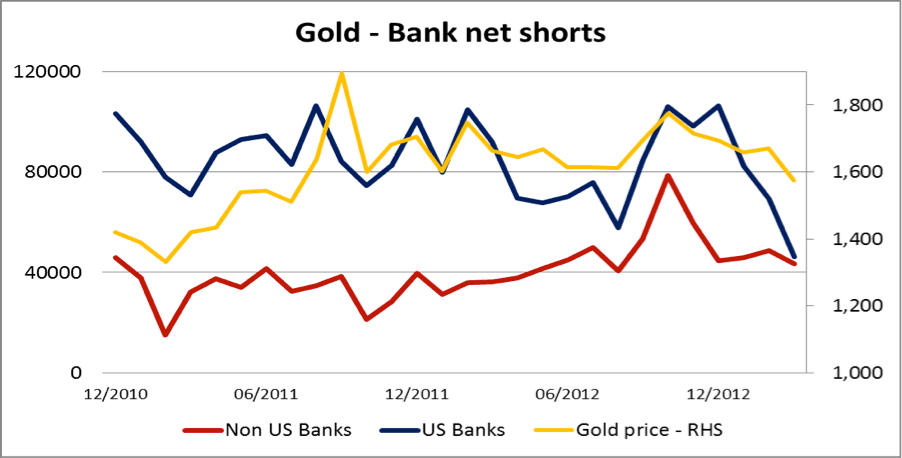 Since September 2009, the average number of managed funds (hedge funds) with short positions has been 21, with as few as five and a maximum of 56 on 19 February: on 5 March there were 54 shorts. Looking at the weekly figures it has been unusual to see more than 25-30 short positions, suggesting there are as many as 25 funds short that do not normally deal in gold futures. The average total managed money short position is 13,714 contracts: on 5 March it was a record 67,182.

Silver is a different picture, as seen in our second chart. 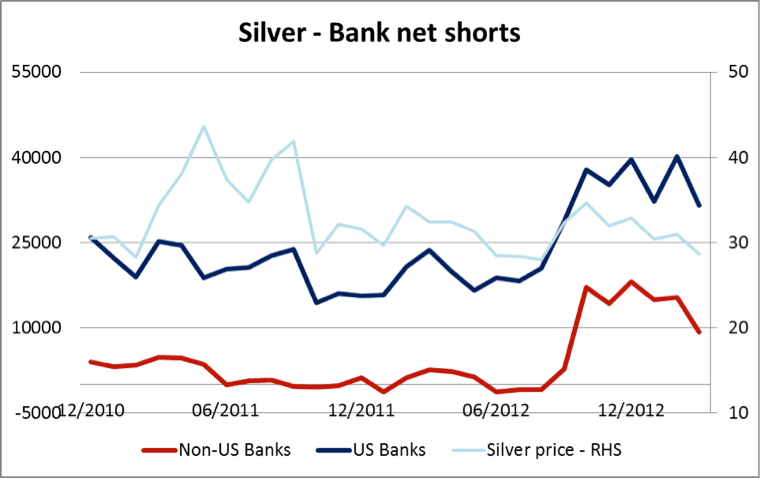 It is only in the last month – with the relentless attack on gold – that the combined bank short position has fallen, and then by not much compared with gold (15,471 contracts or 27%). The short position held by managed funds is 17,123 contracts, five times the level on 5 February; the number of traders short has risen from 10 to 26. Again and as with gold, when you see a sharp rise in the number of participants you know that dealers with little experience are speculating; dealers who haven’t bothered to consider why the bullion banks are so keen to close their short positions.

It is doubly dangerous to short silver futures when there is evidence of strong underlying demand for bullion. Sales of silver eagles are hitting records, and 43 tonnes was added to the SLV ETF on Wednesday, just the latest evidence of continuing demand. This is why I regard the money managers’ short positions as the best contrary indicator available.

It will be interesting to see if the short-selling by the hedge funds increases further from these overblown levels. The bears are talking gold down to below $1,500 ultimately, but they are – as they say – talking their book. Next week’s news, with a busy Thursday, is as follows.