This week the focus has been on Japan, where “Abenomics” is beginning to bite in ways unexpected by the Japanese authorities. Confidence in both bond and equity markets was destabilised, as investors digested the implications of monetary policy out of control.

The fall in Japanese markets has, however, undermined markets elsewhere – both through the spread of deteriorating sentiment, and also because hedge funds had been unwinding long positions financed by borrowing in yen. The effect on US Treasury bond yields should ring some alarm bells, as indicated in the chart for the 10-year bond, which has now broken firmly above the 2% level. 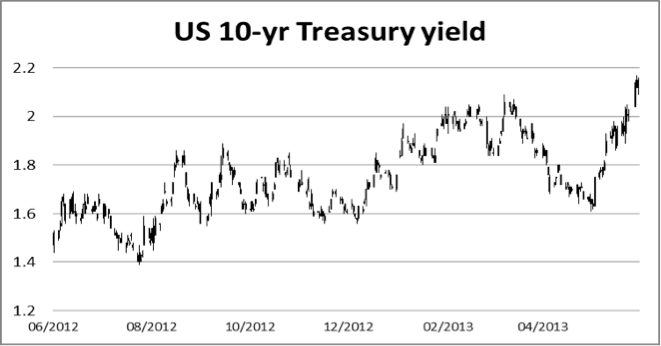 In contrast the effect on precious metal prices appeared confused. Unlike all bond and equity markets which are over-bought, precious metals are very over-sold with unusually large short positions in the market. Therefore, short-covering should have pushed prices considerably higher. Instead, until Thursday gold was capped at $1,400, and every time it traded up it got hit. The only logic in this behaviour is that either the central banks or the bullion banks, or possibly a combination of the two, were acting to keep prices from rising. And tracking open interest it certainly looks like the bears have started closing, with Open Interest falling spectacularly.

A look at the underlying numbers shows that it is open interest in the June contract that has fallen by about 150,000 contracts since 22 May, with only about 70,000 being rolled into the August contract. One must therefore conclude the hedge funds are cutting their positions and the bear squeeze is on. It wasn’t until Thursday that gold broke above $1,400, and when it did it was with a $20+ push.

Silver through all this has remained steady, stuck in the $22 range. Open interest remains good at about 145,000 contracts (if it had followed gold’s example OI would be closer to 100,000). Doubtless the incentive for keeping the gold price down is fear of losing on the silver short positions which across the largest four commercials (bullion banks) is still about 100,000,000 ounces.