Well, it’s a bit of an exaggeration, but for the first three days of this week daily turnover in the gold future fell to about 80,000 contracts, compared with a more normal level of 120,000. At the same time volatility fell to as close to zero as you can get. The week started with the gold price at $1241 and until yesterday at 1.00pm UK time stuck to a tight range of $7 centred on $1244. Open interest picked up a little, as shown in our first chart.

This zombified market sat up in its coffin yesterday when the ECB announced negative interest rates on bank deposits. For Eurozone banks it is now almost cheaper for them to deposit gold with us at GoldMoney than to leave money on deposit at the ECB. Not surprisingly this stirred gold from its earlier torpor, and by 0830 this morning London time it had risen by a paltry $11 to $1255. 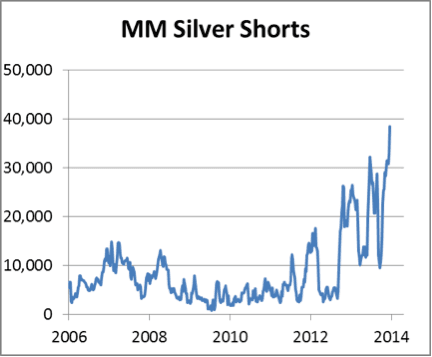 Silver is now set up for a major bear squeeze, but for the fact that both silver and gold have a recent history of weakness into quarter ends. Gold bottomed a year ago on 26th June at under $1200, and again at the same level on 30 December. It also sold off into the end of the March quarter. No doubt this predictable price behaviour has encouraged silver’s bears into a technically dangerous position.

In other news, major investment banks have begun to downgrade their 2Q GDP forecasts by about 0.5%, which should support US bond prices and defer the end of the Fed’s zero interest rate policy. And yesterday, as noted above, the ECB introduced negative interest rates on bank deposits, the stated intention being to encourage banks to withdraw money from deposit and lend it out.

It is hard to see how this measure will enhance confidence in the banking system. Key Eurozone banks are very highly geared, and use the ECB’s deposit facility as a risk offset. The only practical alternatives for them are investing in sovereign debt, of which they probably have too much, and lending to each other for financial speculation. Lending money to non-financial corporations is the last thing they will want to do on pain of a 0.1% penalty.

And lastly, Ecuador has reported that she has deposited half her gold with Goldman Sachs for three years. Presumably Goldman will find a good home for it despite her recommendation last October that gold was a “slam-dunk sell”.

Here is the list of next week’s expected announcements.