There is a myth prevalent today that the gold price always falls when interest rates rise.

The logic is that when interest rates rise it is more expensive to hold gold, which just sits there not earning anything. And since markets discount future expectations, gold will even fall when a rise in interest rates is expected. With the Fed's Open Market Committee debating the timing of an interest rate rise to take place possibly in September, it is therefore no surprise to market commentators that the gold price continues its bear market. Only the myth is just that: a myth denied by empirical evidence.

The chart below is of a time when the opposite was demonstrably true. From March 1971 to December 1979 the trends in both interest rates and the gold price rose and fell at the same time. It is worth noting that this occurred over more than one business cycle, so it is not a relationship which was cycle-dependant. 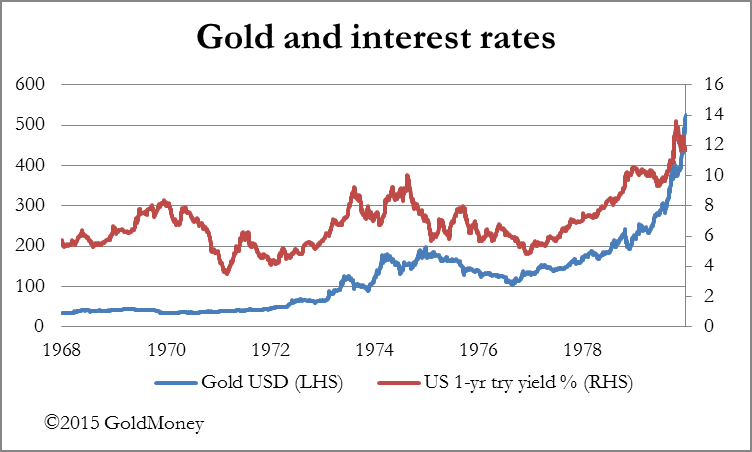 The myth is therefore satisfactorily debunked. To understand why this relationship between interest rates and gold is not as simple as commonly believed, we must take the argument further to bring in commodities generally and visit the tricky subject of Gibson's Paradox. This paradox is based purely on long-run empirical evidence, when gold was transaction money, covering the two centuries between 1730 and 1930. It observes that the level of wholesale prices and interest rates are positively correlated. It is not the price relationship that is consistent with the quantity theory of money, which presupposes that interest rates correlate to the rate of price inflation instead of the price level itself. This maybe a reason why monetarists mistakenly argue, as we also discovered in the seventies, that central banks can manage the rate of inflation through interest rate policy. The common view in markets today about the relationship between interest rates and price inflation is wholly at odds with the longer-run evidence of Gibson's Paradox and accords with the more fashionable quantity theory instead.

Gibson and his paradox are generally forgotten today, and those who centrally plan our money and markets appear unaware of the challenge it poses to their monetarist preconceptions. Keynes, no less, described Gibson's Paradox in 1930 as "one of the most completely established empirical facts in the whole field of quantitative economics", and Irving Fisher also wrote in 1930 that "no problem in economics has been more hotly debated". Even Milton Friedman agreed in 1976 that "The Gibson Paradox remains an empirical phenomenon without a theoretical explanation".*

Resolving this paradox can be left to another time; instead we shall consider the implications by looking at price relationships between wholesale prices and interest rates in a post-gold world. The next chart is of producer prices measured in gold compared with one-year Treasury yields. 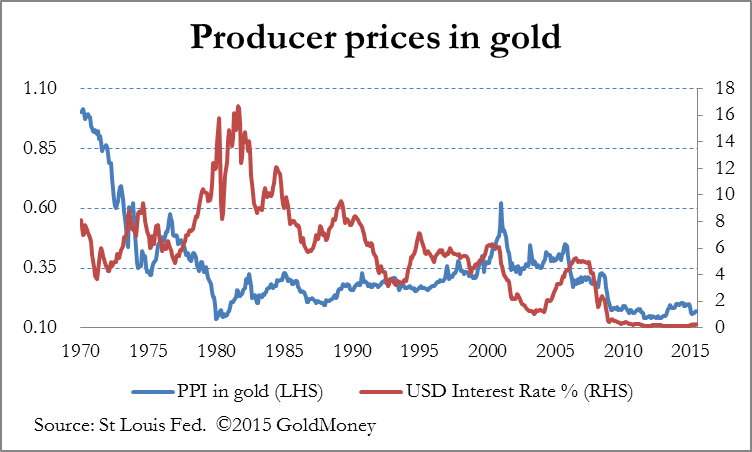 I have taken the St Louis Fed's "Producer Price Index by Commodity for Crude Materials for Further Processing" to more closely reflect commodity price trends, and to reduce the additional considerations of changes in processing margins over time. The one-year interest rate is preferred to the original evidence of Gibson's Paradox, which used the yield on undated British Government Consols stock as being the only continual information on rates available, because we need to more firmly link the evidence to modern interest rate policies.

Looking at the chart, it is hardly surprising that Gibson's Paradox was quashed from the time of the Nixon Shock in 1971, when the US unlocked a huge rise in the gold price by ending the Bretton Woods Agreement. Instead, the gold price took on a life of its own, driving down wholesale prices priced in gold for the next nine years. The rise in the index from 1980 to 2000 reflected gold's subsequent bear market when gold fell from $800 to $250, but the influence of Gibson's Paradox appears to have returned thereafter.

This conclusion might be considered suspect; but the chart tells us that not only are producer prices at their lowest for thirty-five years when measured in sound money, the price level also coincides with zero interest rates. In theory, it accords precisely with Gibson's Paradox. So where do we go from here?

There is only one way for interest rates to go from the zero bound, it being only a matter of time, time which according to the Fed is now running out. Commodity prices in their role as raw materials therefore seem set to rise with interest rates, if the Paradox is still valid. Furthermore, the evidence from this analysis suggests that wholesale prices are suppressed even more than the price of gold. This being the case, when the interest rate cycle turns the potential for higher raw material prices measured in dollars could be truly spectacular, even more so in the event the gold price rises at the same time, which seems likely in the event that financial markets become destabilised by higher interest rates.

It is worth repeating at this point that the economic consensus, which adheres to the quantity theory of money and has been comforted by the apparent absence of consumer price inflation in the wake of the post-Lehman monetary expansion, takes a diametrically opposite view to that indicated by the Paradox. The prospect of a turn in the interest rate cycle is expected to drive the dollar's exchange rate higher still, weakening commodity prices and gold even further. In the language of the dealers, everyone is on the same side of the trade, meaning the dollar is technically over-bought and commodities over-sold.

Gibson's Paradox says it will turn out otherwise, and it could be central to linking the cyclical relationship between interest rates, securities markets, and commodity prices. It becomes much easier to see how these relationships tie together. Rising interest rates would almost certainly be accompanied by a potentially large fall in overpriced bond and stock markets as speculative positions are unwound, the former even undermining bank solvency ratios.

The flight of speculative capital from falling markets has to go somewhere, particularly if cash balances held in the banks are at a growing risk from systemic default. The Paradox tells us that these are the conditions for commodities to become the safe haven of choice for the highest levels of speculative money ever recorded since fiat currencies dispensed with their golden anchor. Ergo, Gibson's Paradox probably still holds.