I thought I had a good idea what disasters we might face in 2013, and then I saw the most recent US Commodity Futures Trading Commission’s Bank Participation Report for gold and silver.

On the basis of recent BPRs these markets are heading for a crisis, which is generally unexpected. I shall break the reader in gently by looking at gold first.

The first chart below shows US banks’ net short exposure to gold up to December 4. Between February and August the US banks managed to reduce their net shorts from 104,717 to 57,689 contracts against a background of a declining gold price. This is logical, to be expected and sensible position management. However, when the gold price turned up after the August BPR, net shorts rapidly rose to new highs, and over the last month unexpectedly increased again while the gold price actually declined. This is a sign that the US banks, of which only five made returns for December, are having difficulty keeping a lid on the market that emotionally at best is neutral, but most probably somewhat oversold. This differs from an over-bought market with potential profit-takers to shake out, as was the case when gold traded at $1,900 per ounce and the same banks were able to bring the gold price back under control. 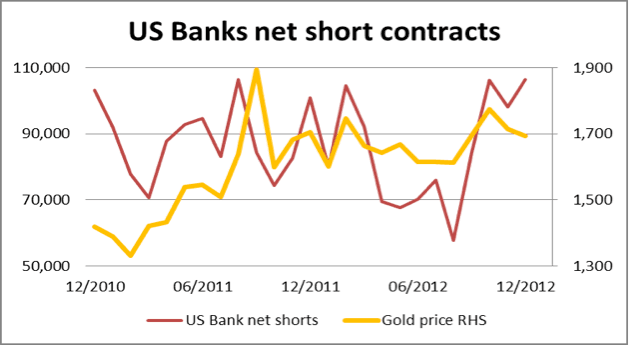 The next chart is of Non-US banks’ net shorts, which tells a very different story. From October 2011 these banks increased their short positions, with a sudden jump between August and October, before sharply reducing their net positions to 44,707 contracts this month. It appears that some of the shorts have ended up on the US banks’ books, pushing their shorts to uncomfortable levels as shown in the first chart. 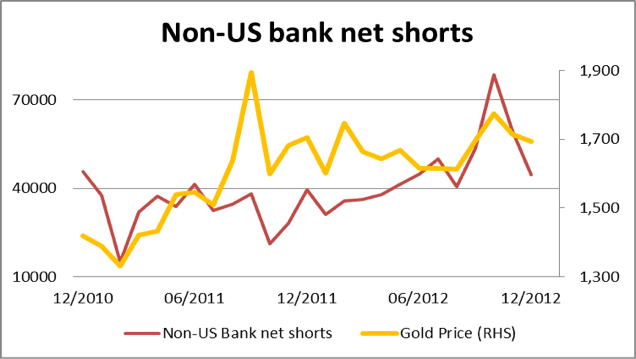 The jump in these net shorts between August and October was comprised of sharp rises in both longs and shorts involving swap dealers and the other commercials. Longs more than tripled from 9,199 to 34,881 and shorts rose even more from 49,772 to 113,445 on a rising gold price. The likely explanation is that buyers materialised through some of these non-US banks, who hedged by buying futures contracts. A dealer or dealers at one or more other non-US banks saw the price go against their shorts and tried to kill it by massive intervention. Subsequently, when the US banks sold the market down from the October rally these non-US banks took the opportunity to reduce their shorts to more normal levels.

This information is particularly revealing, given that the Commitment of Traders Report shows a substantial reduction in the Commercials’ net position by 34,551 contracts for the week to the same date as the BPR, giving an impression of a market being brought back under control. The BPR suggests otherwise.

While there is a large stock of gold that can theoretically become available at higher prices, the same cannot be said for silver. We shall look at the position of the US banks first. The first silver chart shows that even though silver is trading well below its 2011 highs, US banks’ net shorts are substantially higher than might be expected. The long figure is down to only 625 contracts, while the shorts are 40,198, so these less-than-four-banks that reported last week have a net short exposure of nearly 200,000,000 ounces, or twice the estimated annual supply of silver available to investors after industrial demand is allowed for. 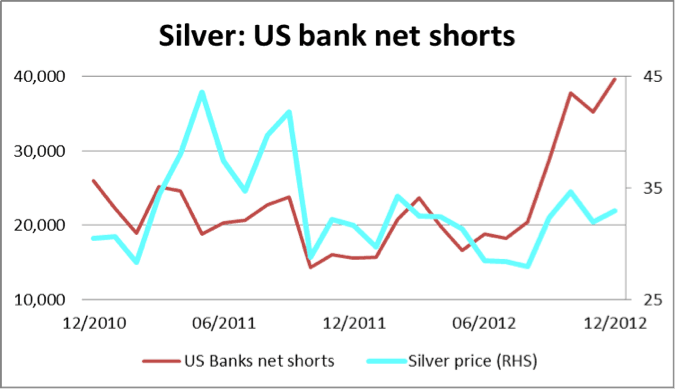 The final chart shows the non-US banks’ net shorts. Unlike their exposure to gold, these banks are in the same deep trouble as the US banks, having made the mistake of turning a broadly level book as recently as the August BPR into a record net short position on the August-October price rise. This is a vicious bear squeeze on them, which added to the US banks’ position amounts to a total short of 290,000,000 ounces. This figure compares with net shorts of only 120,000,000 ounces when the price was successfully taken down from its all-time highs early last year. 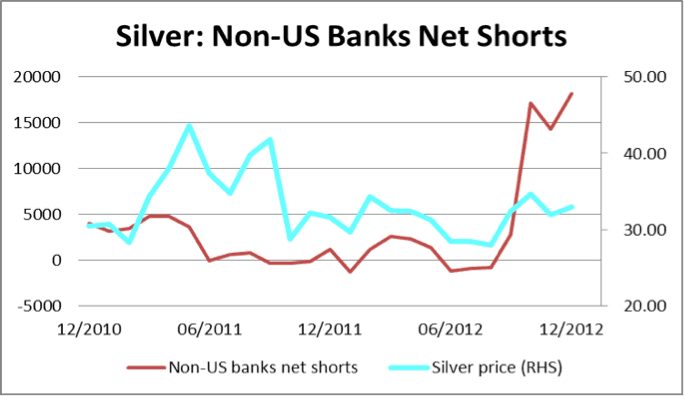 The silver does not exist to cover these short positions, and it will take very little further buying to set off a crisis in this important market. In the case of gold, there have always been central banks with physical bullion available to ease market shortages, but so far as we are aware the strategic silver stockpiles of previous decades are exhausted. There is therefore no price at which these shorts can be closed.

Bank positions in both silver and gold seem to have been adversely affected by “events unknown” from the August BPR onwards. All attempts by the banking community to regain control of these important markets appear to have failed.

Since the date of the latest BPR (December 4), there have been three serious attempts to reduce these short positions and each time the same $32.60 level has held firm. This suggests that a buyer or buyers larger than the banks are prepared to take them on by buying the dips. This price action supports anecdotal evidence that physical bullion in important markets such as London is in short supply.

On this evidence, and assuming the trend continues, there will shortly come a time where NYMEX will be forced to declare force majeure in this market, which they can do under their rule book. The consequences of this extreme action could well be destabilising not only for the price and demand for silver but also disruptive for gold.

Therefore, we must add the breakdown of precious metals markets to the list of systemic dangers we face in the New Year.