With eurozone troubles taking yet another turn for the worse, China’s economy struggling, and US jobs data showing the American economy is again heading in the wrong direction, gold has at last started to make some interesting moves.

While it is often a mistake to directly link the price of gold to specific macro-economic events, the coincidence is notable.

If one can rank news in order of importance, the announcement that China imported 101.78 tonnes of gold through Hong Kong in April, a substantial increase, is at least a tangible fact. Furthermore, news that Iran has escalated her imports through Turkey could also prove to be significant, given she has no access to foreign exchange markets, and gold is presumably being used as currency.

However, translating this into higher prices is not a done deal, because the valuation of paper currencies with no right of conversion into commodity money is purely subjective. This is why gold moves independently from most monetary developments, and if it does so it is often because of underlying market positions, rather than facts as reported by the press.

With this in mind, I have put together the chart below to show the net positions of the swap dealers and producers and merchants. The context for these two categories is obviously open interest in the market, and the market price of gold. 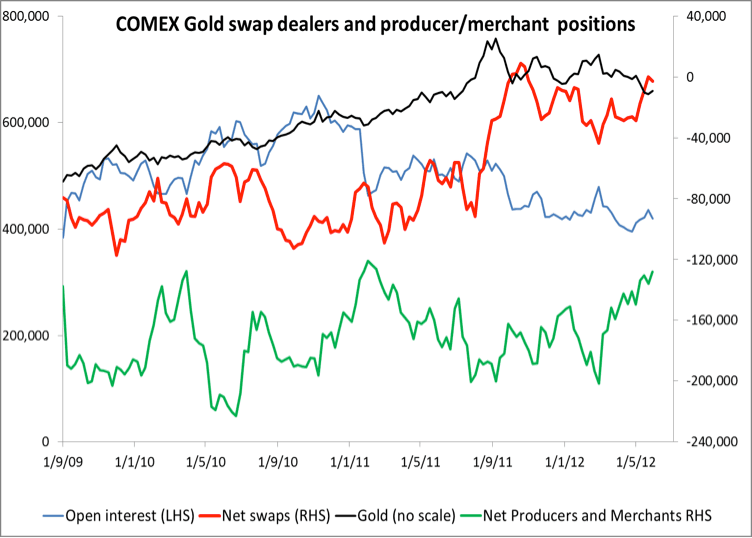 The first point to note is that net swap positions have moved from minus 110,000 contracts 15 months ago to about even today. Swaps are essentially hedges against positions on other markets, so when the hedges are short on the Comex market, it is because they have long positions elsewhere (mostly London). Interestingly, these swap positions were reduced during the run-up to $1,900 last autumn. Since then, some stock has obviously come on the market as a result of the shake-out from the highs, reflected in net shorts totalling 43,750 contracts last February. Following that date these shorts have now been closed.

To summarise, the net swap position indicates the extent of long positions on other markets, including physical and forwards; and the current reduction tells us there has been substantial buying in excess of 120 tonnes on this recent dip.

Now let’s look at the producers and merchants category, which also includes processors and users. Participants in this category use the futures market to transfer entrepreneurial risk: producers and processors sell forward to lock in the price with an eye to covering costs, and merchants and users lock in a price against likely demand. The net short position has reduced to about 128,000 contracts, close to historical lows last seen in February 2011 and March 2010. Importantly, this category has almost halved its net short since February 2010. We know from the swaps that this decline in shorts has not been offset elsewhere. So about 250 tonnes of supply has been withdrawn by this category.

To summarise, this major category may be telling us that the gold price is too low. How it responds to increasing systemic instability, and the demand this creates around the world, is the key question. But for now, the bullion markets look to have been cleared of stock, offering the prospect of rising prices.