The consolidation of gold’s bull phase from October 2008 to the peak last September was a classic three-leg correction: an initial slide, rally, and final sell-off.

Silver followed a similar but more violent pattern. The psychology was there too, with the final sell-off convincing many investors the game was finally over.

Those who sold will most probably be kicking themselves. Consolidations that break established trends, such as 200-day moving averages, shake out weak holders who will buy again higher up when they are more confident. The big traders in the futures market know this: your losses are simply their gains. And as a result both gold and silver are on a far sounder footing with these weak holders out of the way. It is lethal for your savings to play this game. Instead it is more sensible to understand what is happening in simple economic terms. To do this you must turn your normal thinking upside down, and realise that what is happening to precious metals prices is only a reflection of what is actually happening to paper money.

Put simply, governments all over the world are debasing their paper monies at an accelerating rate. Printing euros to rescue the banks has been in the headlines, but this process has only just begun. America, which has to be the focus of monetary attention, is committed to zero interest rates for the next three years, which is unprecedented. The result is that the price of gold has been left behind by exceptional monetary events. You can see this clearly in the chart below. 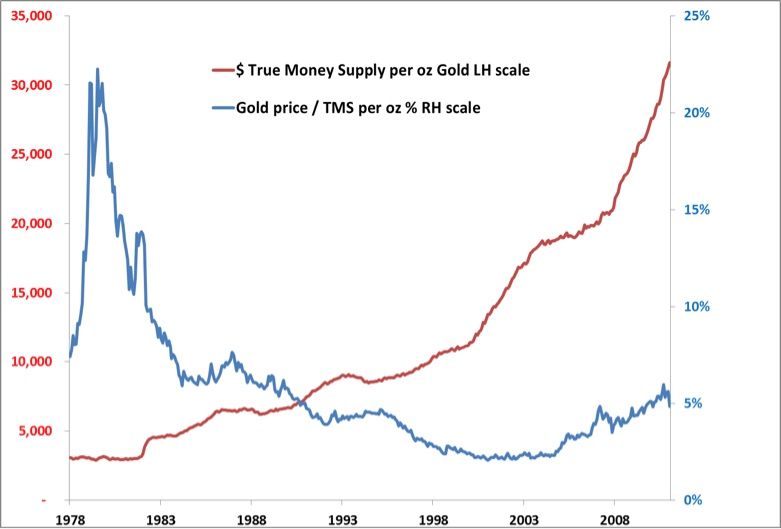 This chart shows US dollar True Money Supply (cash, instant deposits and checking accounts plus a few other minor cash balances) expressed in official gold reserves held at the US Treasury. This has soared over the years, and we can expect it to accelerate further from December’s figure of $31,600 per ounce of gold. Meanwhile, the percentage of TMS actually backed by gold stood at 4.8% at the year-end, and this is shown by the blue line.

The chart clearly shows that while gold has risen dramatically over the last decade in nominal dollar terms, adjusted for the extra money in the system it has only risen 150%. Amazingly, the price of gold measured in these TMS terms has only risen to where it was in late 1991, when the nominal price was $360. Gold’s valuation is therefore still at exceptionally low levels.

The sense of perspective charts like this imparts is vital for understanding the dangers from the tsunami of paper money and debt. Conventional portfolio managers have missed this point entirely, being hampered by the legacies of portfolio management theory and Keynesian economics. But there is a growing band of private individuals around the world who do get it and are accumulating physical gold and silver. They are beginning to understand that paper money is falling rather than gold and silver rising.

The message is if you think like an investor, you will probably lose your investment. Be aware of what is happening to paper money and you probably won’t.