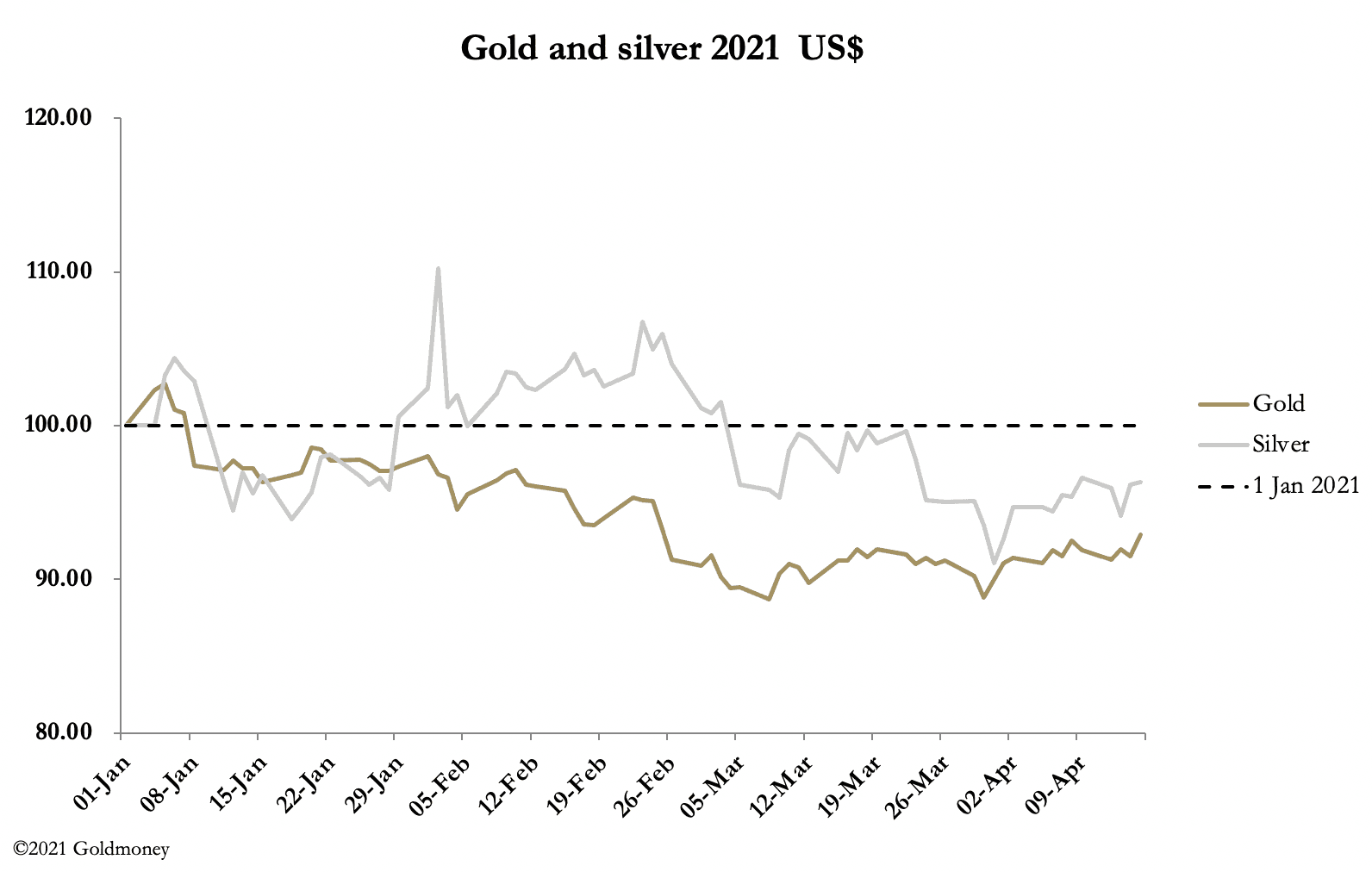 Gold and silver enjoyed an exceptional day yesterday, breaking out of their recent trading ranges on solid buying, reflected in significant increases in Comex open interest for both metals. Preliminary figures indicated that gold’s open interest increased by 16,031 yesterday (Thursday) while the price rose $27.40, and silver jumped 43 cents on an increase in open interest of 3,209 contracts.

Silver’s active contract is May, and from now on one would expect some price pressure being applied to stale bulls in that contract, forcing them to close or roll their position forward to July. Amazingly, open interest in this contract increased yesterday by 1,134 contracts to 85,922, which suggests that at the end of the month will feature contracts standing for delivery. Could this be evidence of a new silver squeeze? Certainly, at the retail level there is a movement developing out of unallocated accounts into either allocated or taking physical delivery, putting service providers under pressure.

The jump in gold’s open interest reflects the Managed Money category (hedge funds) increasing their exposure to gold. As we’ve reported before, having been underweight compared with their normal exposure, they now realise that retail prices are set to rise more that the Fed’s 2% average target. Yet, the Fed shows no sign of raising its funds rate from the zero bound, because while price inflation will rise it is still seen by the Fed as temporary. 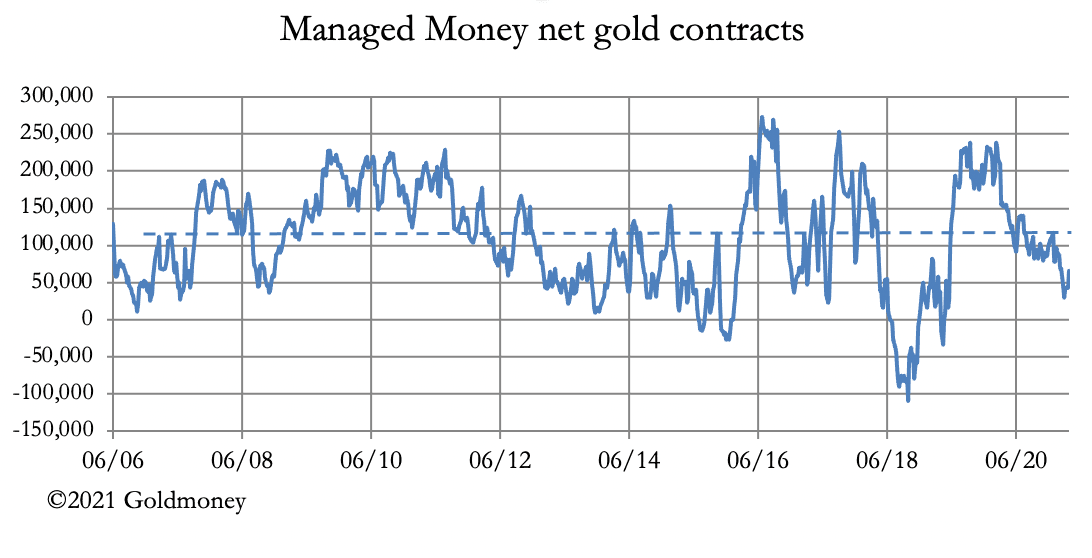 In the chart above, the pecked line represents the average net long position for hedge funds (circa 110,000 contracts), and the most recent known position was 66,472 on 4 April. Since then, their net long position has probably increased to about 90,000 contracts, suggesting that they could add a further 150,000 contracts before hitting overbought territory. Assuming there is no change in the producers’ category net position, this would leave the bullion banks net short approaching 300,000 contracts, which at current prices is $53bn. The next chart puts this in an historical context. 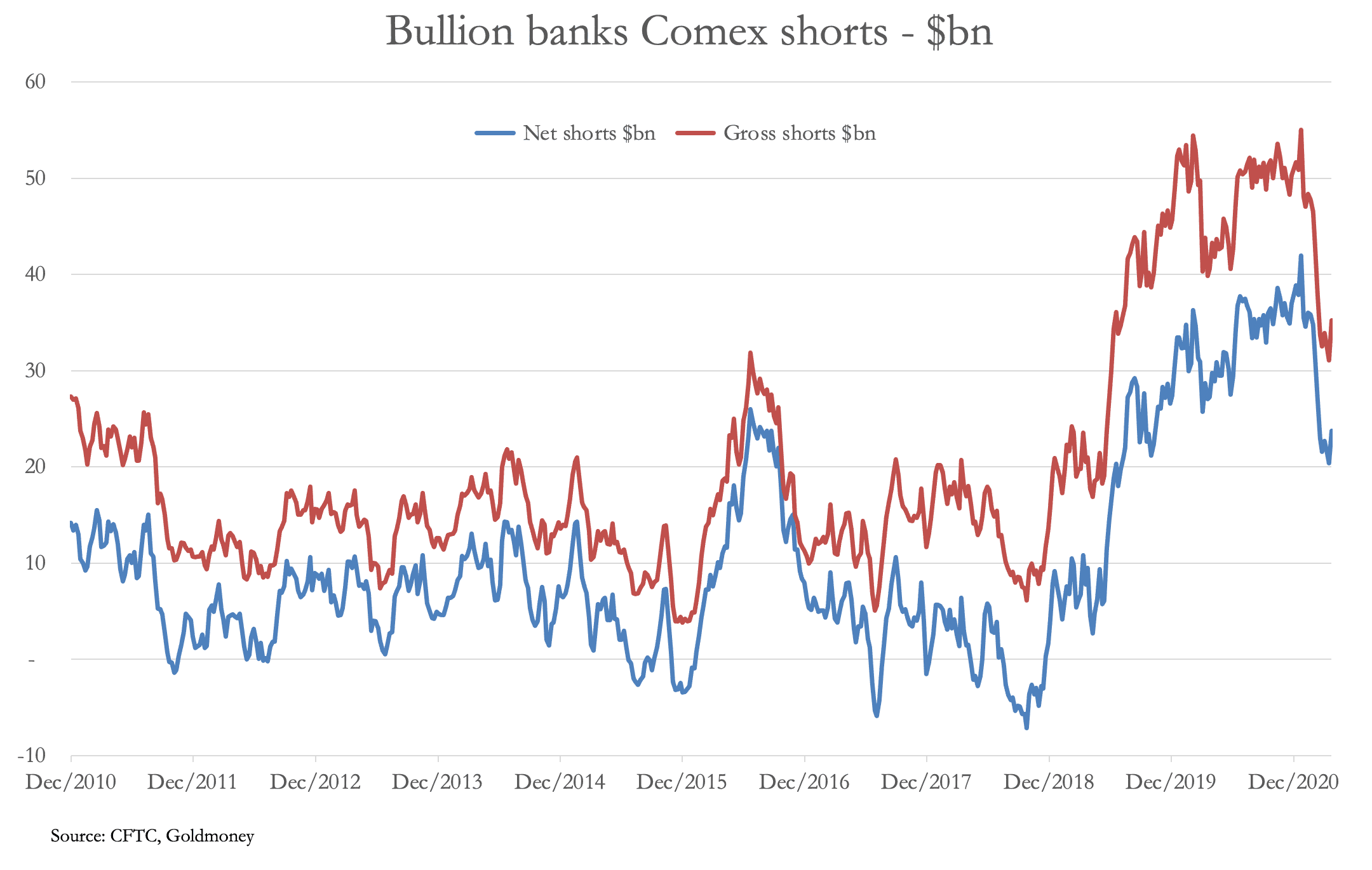 We are looking at the blue line, which has never exceeded $43bn, and suggesting that the current figure at $24bn could be more than doubled. In these inflationary times, the bullion bank cohort is trapped. We do not know their position in London’s forward market, where in theory they run long positions covered by Comex shorts. But we know from the panic last April that physical liquidity must be very low, so the base for expanding unallocated net long forwards in London is very limited.

Perhaps we can anticipate an interesting situation where bullion bank traders will panic, closing their shorts at the same time. Traditionally, this is offset by the Bank for International Settlements gearing up unallocated contracts and options on its gold reserves, and the Bank of England on behalf of other central banks leasing gold in sufficient quantities to overwhelm speculative demand.

It appears the gold market is setting up for another such test.