This, for technical analysts, is entirely within the normal correction zone of a third to two-thirds of the previous rise, which would be 84 to 167 points.

So the fall is technically reasonable, and doesn’t in itself signify any underlying challenge to the merits of a long position in gold. However, when looking at short-term considerations, we should look at motivations as well. And those clearly are the profit to be made by banks dealing in the paper bullion market, which they can simply overwhelm by issuing short contracts out of thin air. This card has been played successfully yet again, with the bullion banks first creating and then destroying nearly 100,000 contracts, lifting the profits from hapless bulls in the Comex market.

The banks get the money, the punters get the experience, and the evidence disappears. The futures market is demonstrably little more than a financial casino, where the house, comprising the establishment banks, always wins. Financial markets are not about free markets and purposeful pricing, which is why the vast majority of outsiders, including hedge funds, those Masters of the Universe of yore, usually lose. This leads us to an important conclusion: the fall in prices has less to do with a change in outlook for the gold price, and more with the way a casino-like exchange stays in business.

The lesson is that in today’s financial markets, it is monopolisation that drives short-term price relationships, not the genuine investment sentiment that we associate with technical corrections of overbought or oversold conditions. The fact is casinos need punters to continually punt. Let it be someone else.

Investors have to overcome another problem, and that is investing in money is not investing. Investment is what you do with your money. Investing is a process of accepting risk in return for a reward. When you buy Treasuries, you take a risk on your capital, in return for which you are paid interest. The money you use to buy Treasuries is not the investment. And with physical gold, there is no counterparty or issuer risk. It is therefore the ultimate non-investment, simply being sound money.

This informs us how we should approach the subject of allocating wealth and liquidity to physical gold. We are reducing our risk, or avoiding exposure towards other assets and currencies. We can now tackle the subject most investors find so difficult to understand, and that is the relationship between gold and fiat currencies.

Bearing in mind that the risk-free asset is gold, all changes in price can in theory be deemed to come from the fiat currency side in the price relationship. We are putting to one side price manipulation for the purpose of our analysis, as well all debate over efficient market theory. Therefore, the correct expression of price is that the price of the dollar is 1/1200 (0.000833) ounces of pure gold, which is the reciprocal of the normal expression. The chart of the price of the dollar measured in gold from 1978 is shown below. 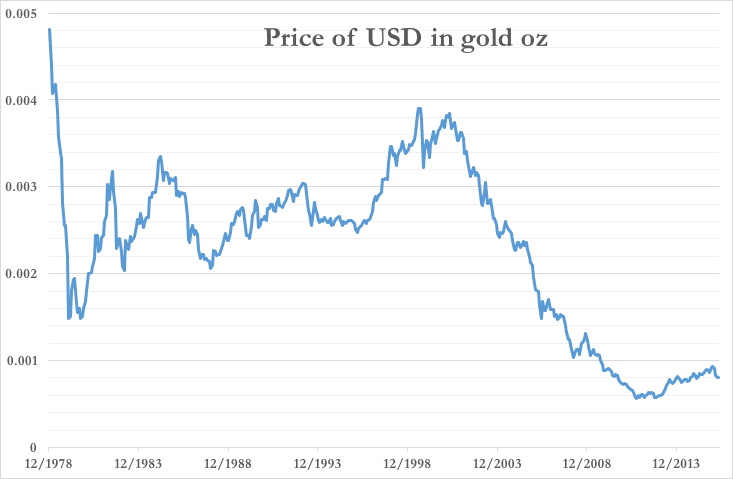 Looked at this way, it begins to make more sense, because the demise of the dollar as a rival currency to risk-free gold is shown here in its proper context. We can now see that instead of the gold price rising from 1979 onwards, the price of the dollar has been falling. And for confirmation, we only have to recall that the purchasing power of the dollar has declined by 72.3% over the last forty-six years, the period covered by the chart, as measured by the consumer price index.

This leads us on to the next question: do we expect the purchasing power of the dollar to continue to decline in the future? The answer has to be yes, if only because it is deliberate Fed policy.

The Fed has set itself an annual price inflation target measured by the CPI of two per cent. This implies a halving of purchasing power for the dollar in thirty-four years. But the CPI is widely recognised as understating the rise in prices, because the calculation methods have been changed to reduce the apparent price inflation. Shadowstats.com assesses price inflation to be currently running at about 8% using the calculation methodology of 1980, which is close to the Chapwood Index estimate, which is running at about 10%.i

It is clear from these independent reports that the cumulative loss of the dollar’s purchasing power has been and will be far greater than the CPI indicates. In a financial world, which takes the veracity of government statistics for granted without question, the effect has been to under-record the fall in the dollar’s purchasing power, and therefore to overvalue it. That being the case, if markets were discounting the future as they should if they were truly free, the dollar would have fallen significantly further. The base position is therefore the dollar, priced in gold, must be significantly overvalued.

Having established a base position, we now turn to the future relationship between the price of the dollar in gold, and the likely pace of the decline in its purchasing power. Since mid-2014, commodity prices measured in dollars fell sharply until last January, led by oil prices. The Bloomberg Commodity Index fell by 46% between April 2014 and January 2016, since when it has increased by 15%. The question is now whether or not this recovery in commodity prices will hold.

Given our base position has established the dollar’s overvaluation, it seems unlikely that the purchasing power of the dollar has room to increase much against the commodity complex, and certainly not on a sustainable basis. Furthermore, demand for dollars from actors in foreign markets seems set to decline, with the demise of the petrodollar, increasing use of the yuan for trade settlement, and subdued growth in global trade of finished goods, all leading to falling demand for dollars. Meanwhile, China is embarking on a plan to industrialise much of the Eurasian continent, which requires her to sell reserve dollars in return for energy and base materials. In short, a period of rising commodity prices measured in dollars seems set to replace the longer-term downwards drift of recent years.

The effect will certainly cause the CPI to rise at a faster pace. The negative effect of last year’s falling commodity inputs is now being replaced with that of rising price inputs. Not only will the CPI begin to rise to exceed the Fed’s target of two per cent, but market expectations of further rises to come will escalate as well.

The turnaround in sentiment for the dollar could therefore develop a negative momentum that will surprise. The Fed’s principal brake for too rapid a decline in the purchasing-power of the dollar is rising interest rates, and it will soon become apparent that it has too little room for manoeuvre in this regard, because of the high levels of debt in all sectors of the economy.

The future for the price of the dollar measured in gold is bound to reflect the Fed’s inability to raise interest rates sufficiently to slow its descent, because of the debt trap. If the Fed was in a position to raise rates to the point where holding gold as money becomes too costly compared with holding dollars as money, it would be a different matter. That was Paul Volcker’s strategy in 1981, and it simply cannot be repeated today without generating the grand-daddy of systemic melt-downs.

The Fed must have a growing awareness that this might be a problem in the coming months, which, though it won’t admit it, is the most important reason why it should normalise interest rate policy sooner rather than later. But after a series of baby-steps, taking the Fed Funds Rate to no more than one or two per cent, further rises are likely to trigger a global debt crisis. And if you can only raise rates by one or two per cent, how do you deal with a price inflation rate of four or five per cent, and rising? It should not take long for financial markets to become preoccupied with this dilemma, instead of fussing over the effects a minor rising interest rate trend has on the gold/dollar price relationship.

So, for those of us who persist in looking at gold as an investment, the fall in the gold price in May is simply within the bounds of a normal correction. But they would be missing a vital point, and that is by buying gold they are only selling an inferior form of money.

All the commentary one hears from the media and financial institutions is based on the fallacy that fiat currencies, led by the dollar as reserve currency, are the ultimate measure for all prices. This explains the commonplace error of regarding gold as an investment asset instead of money. It is a mistake reinforced by central bank and commercial bank attitudes, desperate to protect their seigniorage for base money and bank credit respectively, as well as their profitable casino businesses. But measured by relative performance as competing forms of money, not only is the dollar already demonstrably overvalued when priced in gold, but there is a growing inevitability of a further, substantial decline over the rest of the year.