There is inevitable speculation that tapering might be announced at the FOMC meeting this Wednesday. It should be noted that this is Ben Bernanke’s swansong, and if tapering is to be announced he would probably go out with falling bond markets, falling equities and a soaring dollar, not to mention disruption of emerging market currencies such as the Indian rupee. For this reason perhaps opinion is odds-against tapering, but it doesn’t stop markets being nervous ahead of the event.

Those that think tapering is on the cards in the coming months have to produce a convincing argument as to how tapering is consistent with the overriding policy objective of no increase in interest rates for an extended period. Their assumption must be that zero interest rate policy sticks with us because there is little demand for money, so a reduction in its supply won’t affect rates unduly. This belief is at variance with the facts: interest rates are where they are because the Fed is keeping them suppressed with floods of extra money, and if the flood is made to recede, rates will simply tend to rise.

Instead the pace of monetary stimulation will have to be maintained. However, with the improvement in the budget deficit there is a case for reducing purchases of newly issued Treasuries. Furthermore, since Treasuries are in demand as the best dollar collateral for the shadow banking system there is also logic in the Fed reducing its specific commitment to purchase these assets.

Control of interest rates would be better achieved by targeting yields along the yield curve, which would allow the market to absorb as much high-value collateral as it needed. This could be supplemented by opening up the possibility of the Fed buying other assets from the banks, such as corporate bonds, collateralised student loans and credit card receivables. So we should conclude that the Fed is unlikely to box itself in with respect to QE policy and should instead seek extra flexibility.

The effect on the gold price is an interesting question. With gold reacting short-term to taper-on/taper-off rumours it is tempting to think this is the only story that matters, but underlying physical flows are a bigger story. And here I have no doubt, but equally no tangible evidence, that some eurozone countries have stepped up gold leasing activities. The circumstantial evidence is of Western supply that can only be monetary gold on the one hand, and the strangely stable bond markets for France, Italy and Spain suggesting these bankrupt states have an undeclared source of finance.

There is however a speculative overlay of record short positions in futures markets. The vested interests of dealers in these markets are firmly angled towards lower gold prices, evidenced by record short positions in the Managed Money category. Whichever way the FOMC goes on Wednesday this points to a high probability of a stronger gold price into the year end on bear closing and book-squaring.

For reference for value investors, the chart below is of gold indexed to the month before the Lehman crisis adjusted for the increased stocks of above-ground gold and of the fiat money quantity, which now stands at 65%. 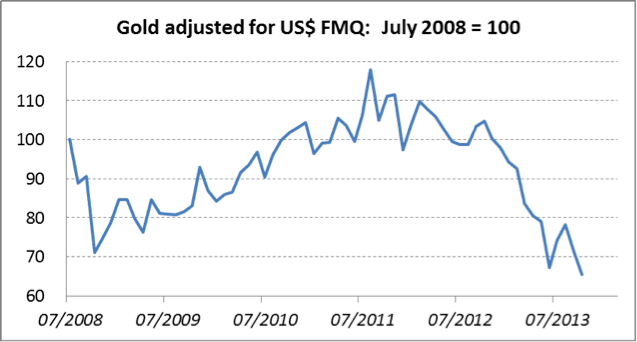 In other words despite increased currency and systemic risk since the Lehman crisis gold has fallen 35% in real terms, suggesting it has become badly mispriced consistent with the psychology of an overextended bear market. In this chart perhaps are the seeds of the next phase of dollar devaluation.