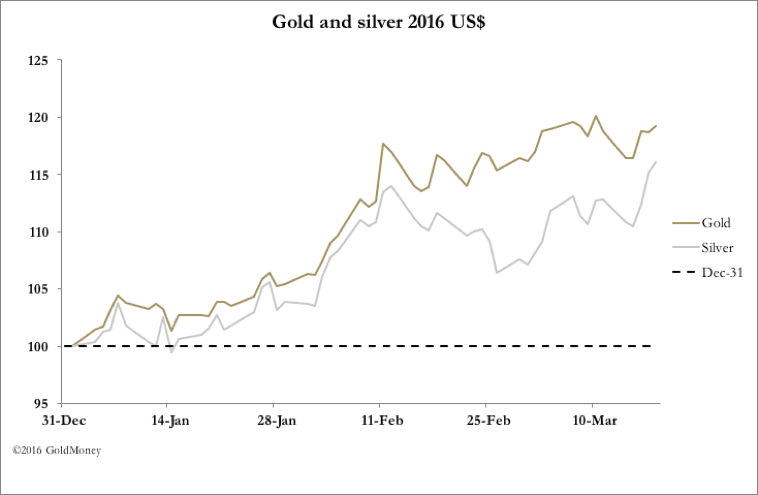 Precious metal prices eased ahead of this week's 2-day FOMC meeting, which ended on Wednesday.

Gold had drifted $30 lower before recovering it all in a matter of minutes on Wednesday afternoon EST, after the rate decision was announced. The FOMC decided not to raise rates, despite a pick-up in core inflation and employment figures, indicating the FOMC's targets had been satisfied. It was the prospect of the Fed's dual mandate being met that had persuaded observers, the majority of which agreed that a rise in interest rates would be deferred, that the odds of a rise next month should shorten. That prospect appears to have receded as well.

In the wake of the FOMC's rate decision, the dollar weakened sharply against all major currencies. Markets have suddenly come alive to inflation risk, with core CPI rising in recent months to 2.3%. Consider this leading price-inflation indicator together with the Fed's reluctance to tighten, and it is obvious why the dollar should suffer.

Gold rose by $30 on the week to trade at $1259 in early London trade this morning, and silver by $1.40 to $16.05. Silver's rise yesterday (Thursday) and in early London trading this morning stands out, and it is making new highs for this year. As can be seen in the introductory chart it has caught up some of the lost ground compared with gold. So at long last, silver is showing better relative strength, with the gold/silver ratio dropping below 80 to 78.5.

The most likely explanation for silver's sudden spurt is a combination of poor market liquidity and a revival in demand for industrial metals. Copper rose strongly as well, and from the mid-January low the price has risen by over 18%. Nickel and iron ore prices have also risen strongly. The rise in industrial metal prices was wholly unexpected in western capital markets, and may be due in part to unexpected Chinese demand, as stockpiled dollars are dumped in favour of stockpiling key metals.

The strength in industrial metal prices, as well as that of crude which is up 50% in five weeks, augers well for precious metals in the coming weeks. The general tone of the market feels positive, even though gold was subdued following its post-FOMC spurt. However, while the bullion banks take every opportunity to close some of their bear positions, they have been unable to spook the bulls. The chart below is of gold's open interest on Comex, and it can be seen how changes in open interest correlate to price movements.

This is normal bull market behaviour. It should also be noted that for the second week in a row, open interest has set new records of over 500,000 contracts, indicating the underlying buying power in the market.

It has transpired that Munich Re, the large German reinsurer, is adding to its holding of physical gold. It should be noted that insurance companies and pension funds are badly impacted by negative interest rates, and in the case of Munich Re it will have significant exposure not only to the Eurozone, but also Japan, Switzerland and Scandinavia. While Munich Re has a history of diversifying its portfolio into investments such as physical gold, it is reasonable to expect other insurers and also pension funds to follow it, as long as bond yields remain supressed at current levels.