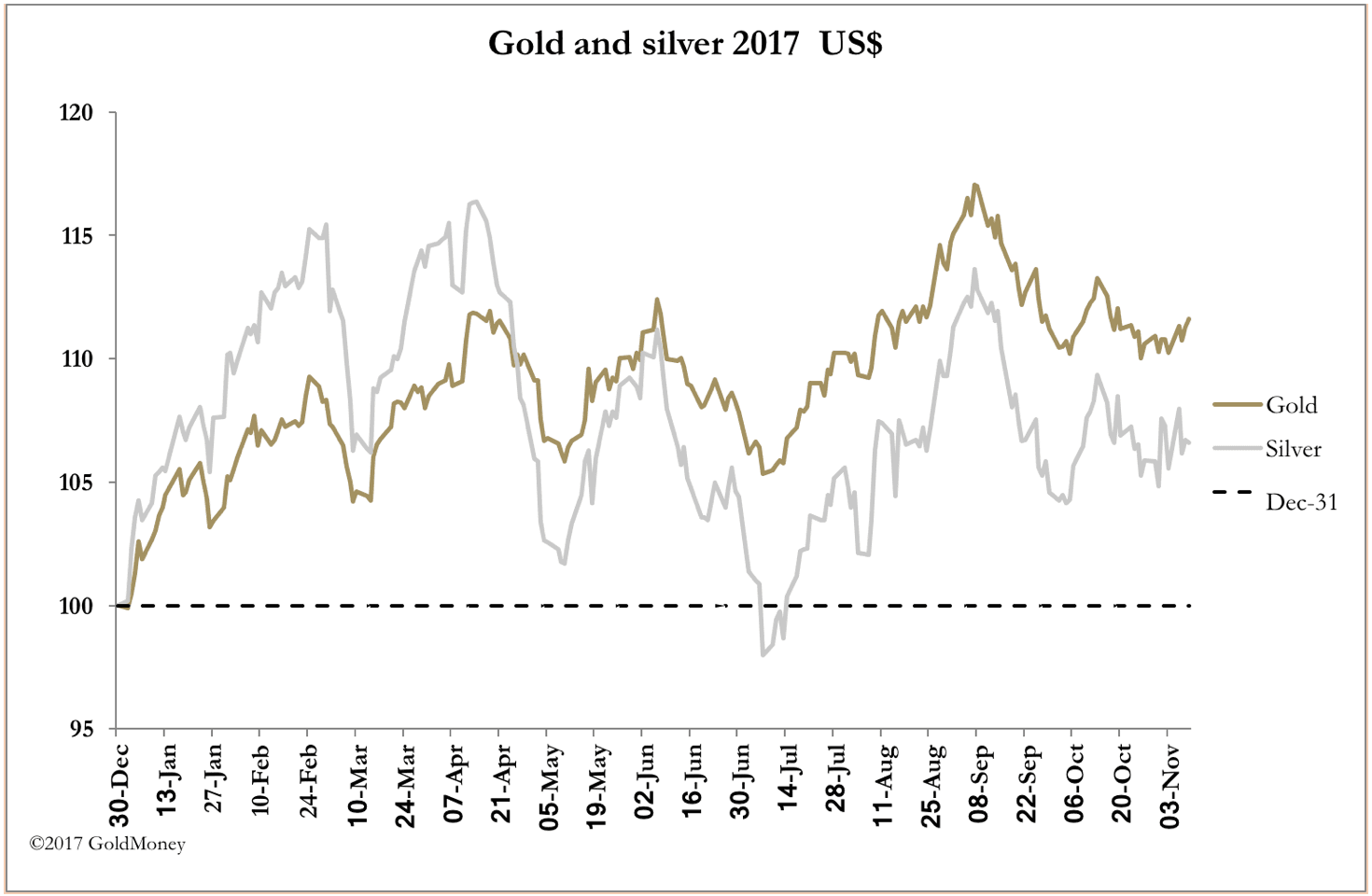 Gold and silver rallied this week, with gold up $14 from last Friday’s close at $1283 in early European trade this morning. Silver is up by 18 cents at $17.00 over the same time-frame. The best day was Monday, following a weak Friday.

Comex December contracts in both metals are rolling off the board, and this is having an influence on price. Trading volumes are healthy, reflecting roll-overs. Meanwhile, the dollar’s rally peaked last Friday, fell on Monday, and recovered on Tuesday before declining the rest of the week. The gold price merely reflected these moves.

Silver underperformed gold, with the gold/silver ratio rising from 74.51 on Monday to 75.51 this morning. This is probably due to the contract roll-over, which usually tends to weaken prices, reflected more in the lower liquidity in the silver contract. That said, it is a positive sign that roll-overs appear to be starting early, with the rest of November still ahead of us.

The expiry of December contracts coincided with sharp sell-offs followed by strong rallies last year and the year before. This is illustrated in the next chart, of Comex open interest and the gold price.

In both cases, November marked the point of major sell-offs, and were followed by a quarter point increase in the Fed Funds Rate in December. The gold price rallied strongly from there.

The difference this time is the lack of a sell-off, reducing open interest to well below the long-term average. You can take two opposing views: the fall ahead of a December low point is yet to happen, which will crucify the bulls, or this time, gold futures are simply in firmer hands. This is where evidence of an early roll-over into the next active contract is important.

Perhaps we should note that so often in markets, just when you construct a rule, it is broken. In this case, the bullion banks, who are short, will be gambling they will get the opportunity to close their positions a third time. Alternatively, it does seem that the managed money longs are more stubborn this time, and that gold is finding its base at current levels.

This is where the dollar’s outlook comes into consideration. There can be little doubt that since markets have adjusted to President Trump, the dollar has taken the flak. A simple assessment of the US’s economic outlook relative to the Eurozone, Japan and Britain suggests that the dollar is now in a bear market, so after the promised rate hike in December, its decline should continue. Therefore, if markets work correctly, the dollar will discount further falls ahead of the event.

The balance of probabilities suggest that the gold price is unlikely to be adversely affected by further dollar strength, which could be why it is so resilient. Another bullish factor is the strength of industrial commodity prices, and this week particularly those of crude oil. Saudi Arabia is undergoing nights of the long knives, threatening to destabilise not just the status quo, but the whole of the Middle East.