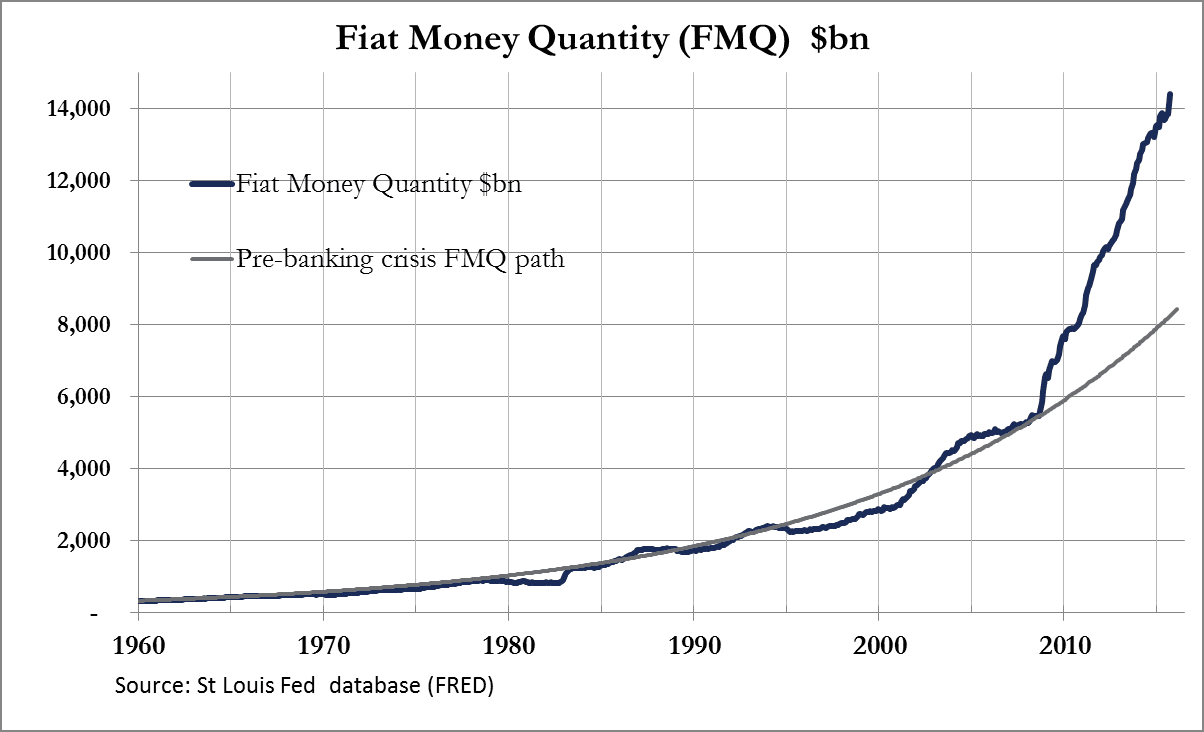 After a few months of slower growth, FMQ has picked up again.

FMQ is the sum of True Money Supply (as defined by the Austrian School of Economics), plus the banking system's reserves and other banking-related liabilities on the Fed's balance sheet. Account is taken of temporary adjustments that otherwise distort the picture, such as the Fed's repurchase agreements and reverse repurchase agreements. See here for a fuller description of FMQ.

The intention is to quantify fiat money both issued into public circulation and also held in reserve within the federal banking system. Fiat currency was originally issued in return for gold deposited with the commercial banks in return for bank notes and deposits. This gold was then passed to the Fed in return for cash and reserves, subsequently handing it on to the US Treasury in return for a certificate, which appears on the Fed's balance sheet to this day. FMQ quantifies the full reversal of this process.

The chart above shows that the growth in FMQ since 1960 followed an exponential path until the banking crisis in 2008. Subsequently, it has accelerated to the end-September 2015 level of $14.39 trillion, considerably above its long-term historic path, and reflects the monetary hyperinflation initiated by the Fed in its attempts to rescue the financial system from the last banking crisis, and then to revive the US economy.

Reverse repos
The biggest jump in September was an increase in reverse repurchase agreements of $413 bn. While the trend in reverse repos is rising, it is a very volatile component of FMQ. In a reverse repo, the Fed temporarily borrows money from commercial banks for a fixed period, posting financial assets, such as US Treasuries, as collateral. So what are these reverse repos about?

There are two basic reasons for the Fed to enter into reverse repo transactions: either the Fed wants to mop up liquidity in the banking system, or it is alleviating a shortage of collateral in the wider financial system. In this case it would appear to be the latter, and is therefore a sign of financial stress. Put simply, there is an imbalance between too much fiat money and not enough collateral, which is creating operational problems.

One should bear in mind that the dollar is the world's reserve currency; so as well as managing the US banking system, the Fed also has a responsibility for foreign-owned dollar liquidity. Aggressive quantitative easing by the ECB, through a demand for collateral, has driven 2-year government bonds in most European markets into negative yields. Financial engineering employing derivatives arbitrages this problem into dollars, and therefore increases banking demand for repos with the Fed in order to obtain collateral. This is the same as reverse repos from the Fed's perspective; hence the Fed ends up supplying the dollar collateral required by the global banking system.

The moral of the story is that the Fed has to keep pumping out both money and collateral under all circumstances, QE or no QE. While there is variation in the monthly growth in FMQ, the accelerating trend is clear to see. It is no exaggeration to say that the dollar is undergoing a monetary hyperinflation that has become unstoppable without incurring serious economic dislocation. So long as the purchasing power of the dollar in terms of everyday goods is not undermined, there will be no restraint in the pace of money-creation.

The primary sources of demand for new fiat money are the financial system and the US Government. The financial system requires continuing injections of bank credit in order to stop asset prices from stalling, and the government continues to need funds to cover its budget deficit and to pay interest on earlier debt. As if to rub in this point, for the umpteenth time the debt ceiling will have to be raised next week to avoid a government default.

Meanwhile, non-financial private sector demand for money remains subdued. The lack of economic growth over recent years is a reflection of how little extra money is entering the "real" economy. Furthermore, depressed overseas markets have undermined commodity prices and created bad debts estimated in the trillions, payable in dollars both in the US and abroad. Sound businesses are reluctant to borrow, except for purely financial reasons, and banks are understandably reluctant to lend. Unsound businesses are the only eager borrowers, needing more credit to survive.

Inevitably, the solution to this problem from a central banker's perspective is further monetary expansion, if only to offset a tendency for bank lending for non-financial purposes to contract. Even money-inflation moderates now accept that the quantity of money must be expanded, at an accelerating rate if necessary, to prevent the US economy from sliding into depression.

The relevance to gold
While the purpose of FMQ is to quantify the fiat money originally created through the acquisition of publicly owned gold, there is no point in trying to estimate a value for gold by reversing the process. The Fed no longer has the gold on its balance sheet. Instead it has a gold certificate valued at $11bn, issued by the US Treasury.

The gold certificate is just a piece of paper. The true quantity of gold held by the US Government is unknown, even though it is stated to be 8,134 tonnes. A subset in the Treasury, the Exchange Stabilisation Fund, was set up by a provision of the Gold Reserve Act of 1934, explicitly without legislative oversight, for the purpose of covertly managing the dollar gold price. It is likely that over the decades the majority of the Treasury's gold has been sold or leased into the market through this fund.

Instead, we can only deflate the gold price by the increase in FMQ to arrive at a value in 1934's dollars, at the time of the Gold Reserve Act. It is only fair to also deflate the gold price on the same basis, given the world's above-ground stocks in 1934 were estimated to be 49,000 tonnes, against 165,000 tonnes today. The result is shown in the chart below. 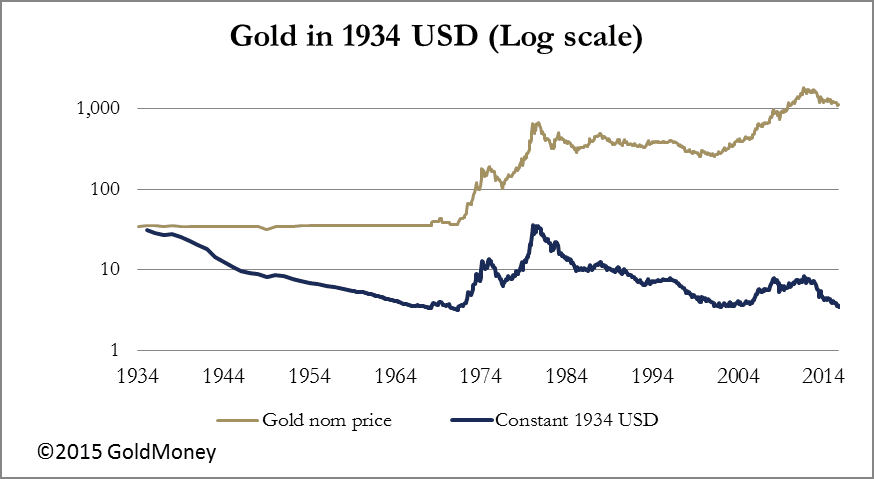 Priced in dollars deflated by the increase in FMQ and global above-ground gold stocks since 1934, the price has fallen from $35 to only $3.42. The lowest it has been in these terms was $3.31 in April 1971, when heavy government intervention failed to suppress the price, only four months before President Nixon threw in the towel.

You can take one of two views: either gold is now only an historical curiosity and has no relevance to modern macroeconomics, or it is incredibly undervalued. Anyone taking the former stance will need to convincingly explain:

1. Why it is irrelevant that people all over the world are accumulating gold as the ultimate store of exchangeable value;
2. Why it is that monetary hyperinflation, in defiance of history, will not lead this time to an uncontrollable fall in the purchasing power of the dollar; and
3. Why ordinary people will not discard fiat currency for gold in the future.

In the absence of a convincing case for the status quo, FMQ indicates that a revival in the gold price of epic proportions is long overdue.