Even before the Federal Reserve announced its latest bond-buying blitz on September 13, US money supply measures were growing at a healthy clip. Unofficial M3 calculations reached $14.7 trillion in August.

Now that the Fed has approved additional money printing to the tune of $80 billion a month ($40bn in MBS and $40bn in Treasury debt) we can be very confident of reaching our previous projection of $15 trillion this year. After that it will become very difficult to predict, as money printing accelerates beyond linear models.

As more people wake up to this, and realise that in our interconnected world there are very few places and asset classes that are immune to the recklessness of our central planners, precious metals will slowly win the affections of ordinary investors: first as safe haven investments, then as monetary metals. 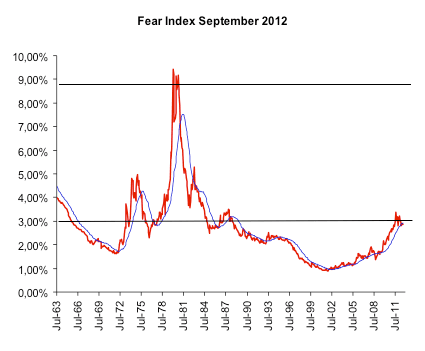 The Fear Index is a perfect measure of confidence in the dollar, since it compares it with its only real rival in our modern world. Under our post-Bretton Woods system all major fiat currencies are tied at the hip to the dollar, so talking about the euro, yen or RMB as alternatives to the dollar under the current system is a mistake. All major central banks are racing to print; all are trying to keep pace with the dollar in a set of competitive devaluations that resembles an arms race. In the long run all shall suffer the same fate.

However it is interesting, at least for those more focused on the short run, to take a look at the relative picture. We can do so by comparing the Dollar Fear Index to our brand new Euro Fear Index. 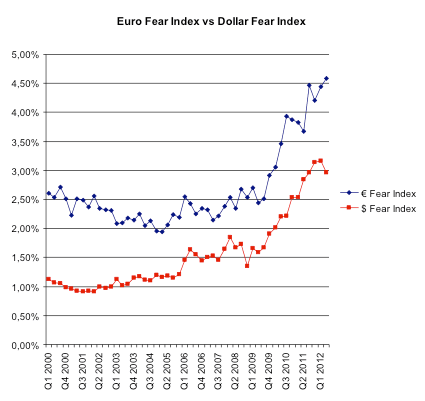 As you can see in the chart above, the European currency suffers from a lack of confidence relative to the dollar. It is hardly surprising, given that the eurozone currency union is in its early teens, while the dollar has reigned supreme as the world’s reserve currency since the Second World War. That is why in uncertain times the flight to safety still implies a strengthening of the dollar (relative to the euro and the British pound at least).

A small warning about the Euro Fear Index: official eurozone gold reserves are not very evenly distributed. Out of 10,787 tonnes (347 million ounces) of gold held by eurozone states (according to World Gold Council and IMF data), over 80% are held by just three countries: Germany (3,395), Italy (2,452) and France (2,435). Arguably this gives gold-rich countries an incentive to abandon the euro, given the crippling costs they may face as a result of Brussels’ “fiscal union” plans. A second issue not to be ignored is that an unspecified but substantial amount of this European gold, particularly German gold, is actually across the Atlantic in the New York Fed’s vaults. Might the Europeans one day have cause to regret this? As the old saying goes: “possession is nine-tenths of the law”.

However, what the chart above does show clearly is that confidence is falling in both the dollar and the euro. Eurozone M3 (thankfully the European Central Bank still publishes this data, unlike the Fed, who stopped publishing M3 numbers six years ago) has also grown at a healthy pace – reaching €10 trillion in Q3 2012 and doubling since 2001. Anybody that thinks that the ECB has even a passing resemblance to its alleged spiritual predecessor, the Bundesbank, should glance at the almost €500 billion created since 2011. And that is before the word “unlimited” became a part of Mario Draghi’s speeches.

Currencies will continue to fluctuate in value against one another, but you can be sure of one thing: against gold and silver, they will all continue to lose value.

The Euro Fear Index is based on the same equation, but uses euro M3 (as reported by the ECB) and the sum of the eurosystem’s gold reserves.