Despite the pause in monetary stimulus and the huge expectations built up over QE3, the truth is that US money supply continues to grow at a healthy pace, proving that the supposedly “sterilised” Operation Twist is still inflationary.

US July M3, as calculated by shadowstats.com, is over $14.6 trillion, well on its way to reaching $15 trillion this year. The US national debt stands close to $16 trillion – it being a signature of our current debt-based money system that total debt always exceeds total money supply, as when the central bank creates money out of thin air it simultaneously creates an equivalent amount of debt plus interest. Anybody who understands the power of compound interest and exponential curves should shiver at the thought.

It is no surprise that money supply continues to grow. If the Fed wants to maintain the current negative interest rate policy, the only way to do it is to buy bonds and print money, with or without headlines and big announcements. If they stop printing even for a second the whole house of cards starts shaking. The system needs constantly accelerating growth. Just imagine what the movie Speed would have been like if that bus – instead of threatening to blow up if the speedometer dropped below 50 – had required an extra 10 mph every 10 minutes, and you will get a sense of the economic bus of doom that we are all riding.

The idea of using something tangible as money is making a comeback, not because of politicians, academic economists or the media, but despite them. In fact, as we have seen from media reaction to America's Republican Party including proposals for setting up a “gold commission” in its convention agenda this week, both mainstream economists and policymakers are overwhelmingly against the use of gold as money (their chosen adjectives range from “ludicrous” to “nonsensical”). In a University of Chicago poll of 40 top economists, none were in favour of a return to some form of gold standard. Despite this overwhelming academic opposition, gold is on the radar for the simple reason that the current paradigm is not just fraying at the edges, but on its last legs. The consequences of the largest experiment in fiat money in human history are now being felt in earnest and people, or at least those people who have not invested their intellectual capital in the status quo, are looking for alternatives.

As we can see from the Fear Index, things move slowly in the world of ideas, it has taken a decade for gold to come back on the radar, but now momentum is building. The Fear Index has now been knocking at the doors of the 3% level for a year now, and it looks like the next leg up will breach it aggressively.

We must look to the 1970s as the best guide for what might happen next. The “Nixon Shock”, stagflation and other episodes coloured what was a very volatile journey for the gold price over that decade. It was a bumpy ride, but well worth the trouble for those that chose cold, hard metal over empty political promises. Nixon severed the last official link between the US dollar and gold in August 1971 (see this infographic of the recent history of world monetary systems). It wasn’t until 1979 that the Fed, led by its new chairman Paul Volcker, started raising interest rates in a determined effort to fight rising prices. Both the gold price and the Fear Index peaked in 1980. Keep those timeframes in mind. We are still in the early innings of gold’s current ascent. 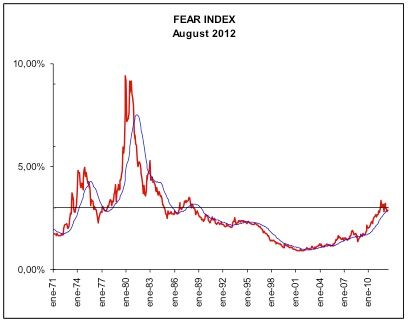