The Federal Reserve’s new stimulus measures have had a noticeable impact on market confidence in the dollar and the solvency of our current monetary system.

The Fear Index picked up in September and is once more over 3%. The money supply continues to grow at a healthy pace and is picking up speed, adding an average $50 billion every month. More significantly, the gold price rose in September, indicating that concerns about the dollar are growing (though as we saw last month with the Euro Fear Index, worries over the state of the euro are even greater). 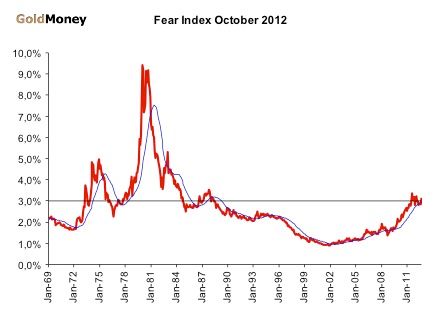 Nevertheless, these concerns are still at historically low levels: there is still a long way to go until we reach Fear Index levels last seen in the 1980s. The monetary crisis that has been building for the last 20 years – and accelerated with the 2008 financial crisis – is still in its relatively early stages. But understanding of the underlying problems of debt and fiat money has spread beyond a small number of contrarians to a larger number of players in financial markets. Of course the really explosive final stage, when the general public starts to catch on, is still some way off. However, it is extremely important to be prepared before we reach that stage, when it will be far too late and expensive to take the necessary measures. You cannot buy insurance against an earthquake when the ground is already shaking. 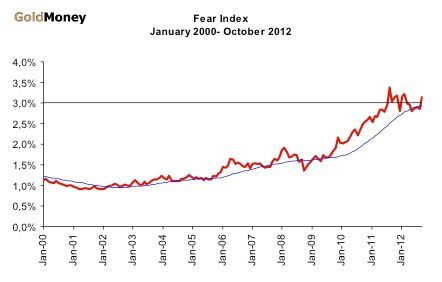 If we zoom in on the last few years we can see that the Fear Index has been trending up from multi-decade lows since 2001-2002. It picked up some speed in 2007-2008 and it has taken a pause for the past year. It now looks primed to resume its climb.

The underlying fiscal and monetary situation is certainly dangerous enoughs. US government debt/GDP is now 102.4 % as of September, totalling over $16.2 trillion. Why is this extremely relevant? Because it basically blocks any exit strategy that the Federal Reserve could hope to apply when price inflation rears its ugly head and consumer prices start to reflect the monetary inflation that is already being perpetrated against them. (Let us not forget that inflation is an increase in the money supply, rising prices are just its consequence).

Should the Fed attempt to reverse its zero-interest rate policy (ZIRP) and tighten to fight inflation the way that Paul Volcker did in 1979 (by pushing the Federal Funds Rate as high as 20% by June 1981), it would immediately have to face the unpleasant fact that rising interest rates would make the Federal government unable to service the national debt. Back in Volcker’s day, US Federal debt was around 30% of GDP. Raising rates was tough love, but it was manageable. How is a government that is unable to finance current expenditures going to pay 5% or 10% of GDP just in interest? Never mind the even higher levels seen in the 1980s. Only eternally low rates make the current debt situation even conceivable without some kind of default.

Of course perhaps that is the plan: default through inflation. But that is an extremely dangerous policy, since investors and savers are well aware of this possibility and will react accordingly. This could trigger a panic in US Treasuries and the dollar, which would be extremely chaotic and destructive. Gold would be one of the very few safe havens.

Fed chairman Bernanke has caught a tiger by the tail and assures us that all is well. It is not surprising that the Fear Index is rising.