US M3 grew by another $46 billion in October, reaching an estimated $14.8 trillion. At the same time the gold price weakened, taking a small break after the substantial run-up in September.

As a result the Fear Index remains above the significant 3% level, with the 21-month moving average also moving higher. 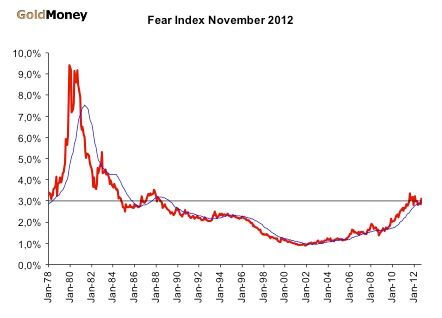 US negotiations over the fiscal cliff have for the most part kept the recent significant spike in student loan deliquencies out of the headlines, though Bloomberg did report on this in its "Chart of the Day" feature last Thursday. As the linked to chart shows, delinquency rates in this $956bn market have reached levels reminiscent of previous debt bubble crashes, and highlight the almost Faustian bargain that a whole generation has signed up for to acquire an education (and in many cases, a distinctly dubious education at that).

In an age when information has become infinitely more accessible, it is striking that college costs should have risen to levels that require students to mortgage decades of their future. It is a good example of how easy debt and easy money can be funnelled into one bubble after another – driving up prices in sectors where the government becomes involved with the ostensible goal of making things “affordable”.

After all, let us not forget that money is fungible. It is therefore extremely difficult to predict where new money will end up – only that it will end up somewhere. Even if inflation measures were not regularly adjusted to better reflect what our central planners consider to be the price of living, they would still be hopelessly insufficient, as they overlook price changes in asset markets and bubbles in certain sectors, regions, countries or commodities. That would not be a problem – after all no statistic is perfect – but for the fact that the Fed uses CPI as one of the key inputs for its monetary policy.

This succession of bursting bubbles has sadly not proven much of an incentive for the press and public to look more closely at the US sovereign debt situation. The fiscal cliff discussions remind me of Freud’s observation about the narcissism of small differences: Democrats and Republicans are essentially splitting hairs, yet – as with the 2011 debt ceiling talks – media coverage of the negotiations fosters the illusion that real differences are being aired.

It’s an illusion that an increasing number of Americans are seeing through (as evidenced in part by the recent surge in American Eagle gold coin sales), but many remain oblivious to the truth that accumulated debt that can easily drive a country to bankruptcy. Inertia and the feeling that “it can’t happen here” remain powerful influences on human behaviour.

However, as the experience of the 1970s and 1980s show and the Fear Index chart reflects, it might take a long time to get things moving in the fixed income world, but once the realisation starts to spread, things can move extremely fast. The fact that the Fed is now buying almost 70% of new Treasury issues is a strong indication that this movement has already started. James Turk, in a prescient 2003 article in Barron’s, made the forecast that this whole debacle would unwind sometime between 2013 and 2015, driving gold to $8,000 per troy ounce or more. Back then it seemed to many an extraordinary claim, but right now all the pieces are in place and the dominoes have already started to fall. The bursting of the Treasury bond bubble will be the last nail in the coffin of the fiat dollar.