US M3 growth has ground to a halt in February, dropping to just under $15.1 trillion.

The Fear Index has also retreated slightly to 2.78%, while its 21-month moving average remains at 2.99%, perhaps a pause for breath before assaulting resistance at 3%. 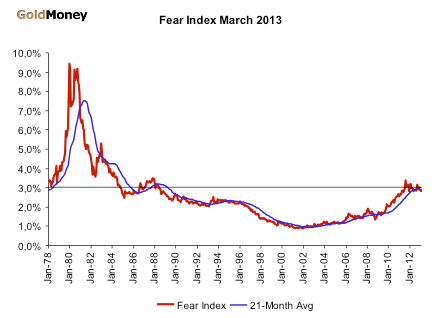 Cyprus has confirmed what many here have been warning about for years: that frozen bank accounts and capital controls were coming. That the current monetary system is built on extremely unstable premises and that recent excess from our monetary central planners will have huge unexpected consequences that will radically question its sustainability. These consequences are not hard to predict, since we have countless historical examples of what happens to a currency when it is inflated away and also of what happens to a fractional reserve banking system when confidence evaporates. Even if the timing of the avalanche is almost impossible to predict, we can know at a glance – should we care to look – that a lot of snow has built up on the mountainside and that taking common sense precautions is the reasonable course of action.

We can also know that once events unfold, there will be hardly any time to react, as many in Cyprus have discovered to their dismay. It is absolutely necessary to take action before the crisis comes. It is also worth noting that events in Greece, especially the bond haircut, had a direct and cascading impact on the Cypriot banking system and in precipitating its collapse and subsequent bailout. We can expect further ripples across the eurozone.

Another lesson that bears repeating is that money in a bank account belongs to the bank. Under our legal and financial system a deposit is a bank liability. The bank is not the legal custodian of your funds in the same way that a parking garage is the custodian of your vehicle, with the duty of returning the same unaltered car to its owner. The bank has a debt. If the bank becomes insolvent and must default on its obligations, its creditors are the ones who suffer the loss. Unlike gold held in your hand or in an allocated Holding, bank depositors suffer from counterparty risk.

However even more pernicious and worrying symptoms have reared their ugly head during the recent crisis. In its desperation, the government of Cyprus not only eyed bank deposits – which legally could be part of a haircut – they also proposed an illegal confiscation of pension funds (thankfully averted) and imposing losses on legally guaranteed small deposits (under €100,000). That these options were on the table means that savers not only have to contend with counterparty risk from the banking system, but also with straight out confiscation risk. The citizens of third world nations where the rule of law and property rights are weak might be used to this, but that this almost happened in a rich European Union member country should set alarm bells ringing for anybody that has anything worth stealing.

As small as it is, Cyprus is a harbinger of things to come. Risk could manifest differently in other countries. For example, in Japan and the US sovereign debt is most vulnerable. In Spain 97% of the public pension fund is invested in Spanish government debt. In the UK, with a huge financial sector in relation to its GDP, it is a run on the pound that could prove the first consequence of tail-risk.

In a German election year we are unlikely to see generous bailouts and an aggressive European Central Bank. Hence the immediate risk is one of default, bank runs and capital flight. In such a scenario protecting your wealth from capital controls is the most urgent step to take, unless of course you happen to be in Japan, whose rulers have vowed to achieve inflation at all costs and as soon as possible. It is no wonder that gold priced in Japanese yen hit an all time high in February. Regardless of whether you fear inflation or deflation, precious metals remain the best long-term safe haven in uncertain monetary times.