Fear Index June 2013 the eye of the storm

US M3 is relatively steady at just over $15.1 trillion, following the disinflationary trend of the past few months. Although US M1 and M2 continue to grow, and the Fed has still not relented from its open-ended monthly bond-buying programme, M3 growth has clearly stalled.

Together with the slowdown in US industrial production and weak jobs market, and it seems to point to an economic downturn. If we take recent weakness in emerging markets as a leading indicator, it seems that the second part of the much-touted double-dip is just around the corner.

It is therefore ironic, if hardly unprecedented, that just as the monetary authorities at the US Federal Reserve seem ready to announce the end (or at least “tapering”) of the emergency, extraordinary and experimental monetary measures that they took in the aftermath of the bust of 2008, that the world is entering a recession: with the EU expected to contract this year, China’s growth slowing and the rest of the emergent countries almost grinding to a halt.

The Fear Index has dropped to 2.42%, with the 21-month moving average slipping to 2.92%. The price of gold has corrected sharply, in a move strongly reminiscent of the mid-cycle correction of 1975-76. 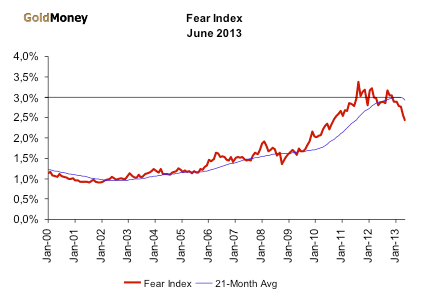 In 1976, as you can see below, the price of gold and the Fear Index corrected during a brief period of relative quiet in the middle of the dollar storm of the 1970s. 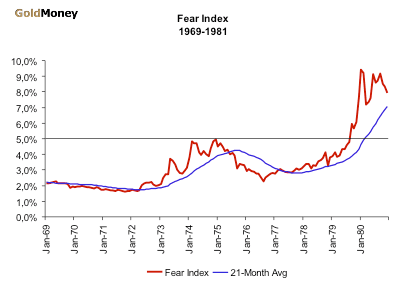 That hope spot was short lived and inflation returned with a vengeance as the guns and butter deficit spending of the previous decade came back to bite the US dollar.

Gold is the ultimate safe haven. As such its allure fades in relatively quiet times. The perceived need for insurance, or a hedge, diminishes when things seem to be running smoothly. As Ronald Stöferle points out in his excellent In Gold we Trust 2013 report, the price of gold outperforms both in times of increasing inflation and deflation, but underperforms in times of decreasing inflation, or disinflation. 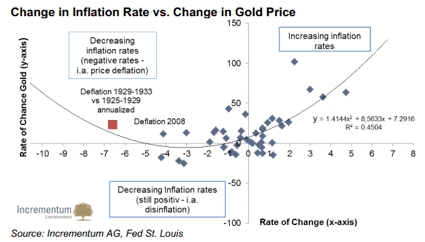 The reason that gold performs well in both extremes of the monetary instability spectrum is that as scarce and independent money it is a good hedge against runaway inflation, but as a physical, tangible commodity that can be possessed directly, it is also devoid of counterparty risk (physical gold only, of course) which becomes particularly important in deflationary times when defaults abound.

The world economic situation might seem calm right now, or at least US investors might be lulled into thinking so, given high equity prices and low bond yields, but there is a veritable flock of black swans approaching. Japan is playing monetary Russian roulette, European periphery countries are itching for another round of bailouts (Portugal, Slovenia and Greece are just waiting until after the German elections). Turkey, Egypt and Brazil are steaming with suppressed discontents; and presiding over it all is the largest debtor nation in the history of the world, attempting to hide a Treasury debt bubble of gigantic proportions behind its back, hoping that a world that uses the dollar as its primary reserve currency will be happy to continue doing so as it is continually debased.

As Mr Jaime Caruana, General Manager of the Bank of international Settlements (BIS), warned in a recent speech to his fellow central bankers: "Central banks have borrowed the time that the private and public sectors need for adjustment, but they cannot substitute for it." In other words, structural imbalances cannot just be papered over or inflated away. Debt-based growth is a recipee for disaster. So we’d better be prepared for it.