US M3 ended 2012 at over $15 trillion, as we have been predicting since Operation Twist was launched. The US national debt stands at over $16.5 trillion, while the gold price ended the year at $1,660 per troy ounce. 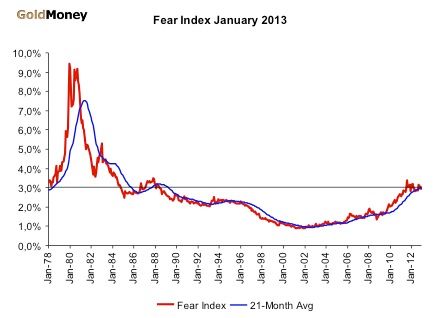 The Bundesbank’s demand for the return of the Rheingold signals the beginning of the end for the Nixonian fiat dollar. The music has started: by the time the fat lady sings the architecture of the current world monetary system will be completely undone, and negotiations will be underway over what is to replace it. In anticipation of what promises to be a very exciting ride, the major players are bent on securing their starting positions.

China is covertly building up its gold reserves, with imports reaching 114 tonnes in December alone. Beijing has a tacit target of accumulating reserves of 6,000 tonnes by 2015. Germany has recalled some of their bullion stored abroad, although it remains to be seen what exactly will arrive in Frankfurt. In Switzerland the “Swiss gold initiative” is close to the threshold for parliamentary consideration. Russia is also quietly importing large amounts of gold. In America it’s private citizens who are taking action, with the US Mint running out of Silver Eagles in January. Similarly in India the people continue to save in gold, despite repeated government attempts to curb bullion imports.

All of the big players are moving fast and growing bolder: less and less bothered that their actions are being recognised by an increasing number of people.

In 2003 James Turk predicted a gold price of $8,000/oz by 2015, based on price action in the previous gold bull market. Given the scale of the debt bubble and the amount of money printing we are witnessing, however, this prediction could well be too conservative. We are approaching the second stage of the bull market – the participation phase, in which that 1% of portfolios invested in precious metals will rise substantially and price moves will be faster and larger than any seen up to now.

The general realisation that prices are already rising more than the government admits is what will spur participation by the general public. As Peter Schiff says, you no longer need a PhD in economics to see that the emperor has no clothes. By now it is obvious to anyone with knowledge of basic arithmetic. The “temporary” suspension of the US debt ceiling should make it even clearer, especially when it is prolonged. Remember that the Federal Reserve’s Zero-Interest Rate Policy (ZIRP) was only supposed to be a “temporary” measure.

The twilight of the fiat dollar is approaching. When the dust settles and the music stops, those who own the gold will be able to afford a ticket for Valhalla. Those left holding worthless paper will be at the mercy of whatever modern day Loki is in charge of financial mischief.

On a related note, Argentina just froze grocery prices in supermarkets in an attempt to convince people that the official inflation rate of 10% is the correct one. Not the 25-30% price rises that have actually been seen wherever food or other necessary products are sold. After all, who are you going to trust – the government or your lyin’ eyes?

Please, somebody send Mrs Kirchner a copy of this book, or a link to this video. This craziness has been tried before. It never ends well.