Despite recent headlines and a great deal of squawking over hints that the latest FOMC minutes heralded a slight (maybe) signal of more hawkish intentions from the Federal Reserve, January saw US M3 rising to almost $15.1 trillion.

The Fear Index experienced little change, remaining steady at 2.89%. US government debt is approaching seven-times US government revenue – meaning that the US federal government spends almost 15% of its revenue on debt service, even at historically low interest rates. 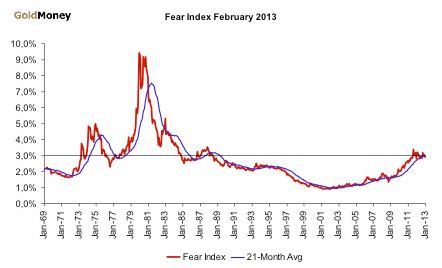 It is easy to get caught up in the headlines and the short-term price action in the markets, but the way for cooler heads to prevail is to ignore the propaganda, the statements of intent and wishful thinking. Ignore the noise and focus on the data. 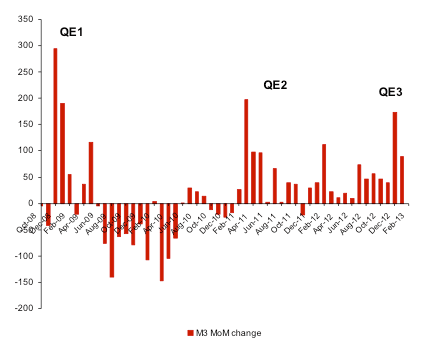 Fact: the Fed is still printing. Fact: the zero-interest rate policy (ZIRP) is still in place. Fact: the US debt ceiling has been suspended. Fact: massive structural deficits have not been addressed (according to some baby-coupon toting Keynesian cheerleaders, they shouldn’t be).

The simple fact is that the money supply is still being inflated at an unhealthy pace – another way of saying that the US dollar is being rapidly debased. The fact that most of the world is racing to outdo the US central bank, with up to 38 countries targeting negative interest rates, according to Félix Zulauf – owner and president of Zulauf Asset Management – means that international holders of the US dollar and of US Treasuries have almost nowhere to run. This lack of alternatives has grown worse. At the start of 2011 perhaps half a dozen members of the safe haven currency club remained. Since then Switzerland, Norway and Hong Kong have caved in and joined the currency wars, with currency interventions and currency pegs.

Anybody who has picked up a monetary history book, even if it’s one by Keynes, will know that this situation is completely unprecedented. We have seen monetary madness many times, but never on such a global scale. There is no ceteris paribus here; no predictions that anybody can make with any degree of certainty, no models that apply. We can however try to use analogy and logic to infer what might be.

If the laws of supply and demand apply to money, as Austrians hold, Monetarists admit and even some Keynesians confess in moments of weakness, then this global explosion in money supply will lead, all things being equal, to prices of goods and services rising. This is no heterodox theory; this is what the Federal Reserve’s own models say. This is what the Bank of England’s empirical studies conclude. This is what the ECB papers on the subject teach.

Since central-bank technocrats believe that QE, ZIRP and money printing in general should lead to rising prices, and they are pursuing these policies with amazing vigour, can we logically conclude that they want rising prices and debased money? (They have said so much in their own words, but here we are trying to focus on their actions).

If our monopoly money managers are so intent on making our money worthless and utterly destroying its function as a store of value, perhaps we should look for alternatives, at the very least as insurance, but increasingly as an integral part of our savings.

There aren’t that many options. Precious metals are historically the best protection against such monetary mismanagement. Slow and gradual accumulation of physical gold and silver is what James Turk has been advising for years and is the way to avoid the short-term volatility that, thanks to liquidity injections, is increasingly a feature of our financial markets.