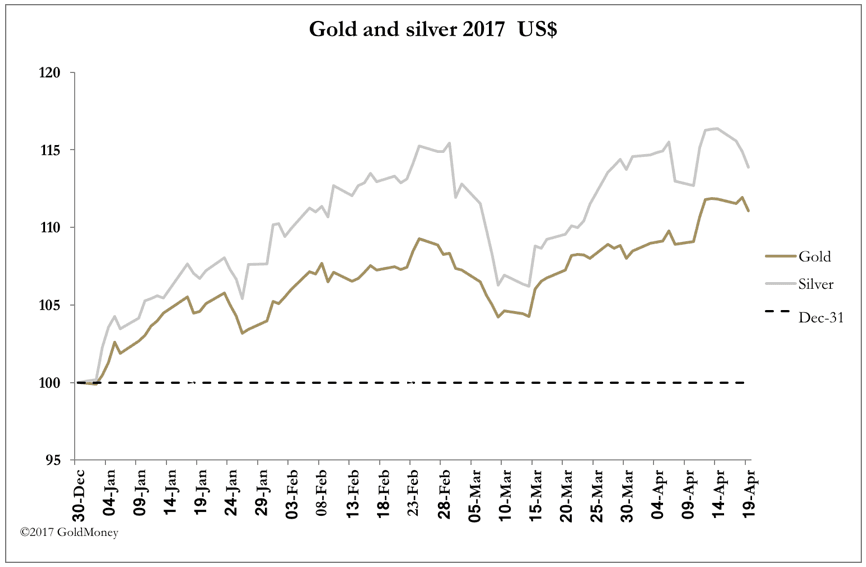 Gold and silver peaked on Monday, when much of Europe (including London) was closed for the Easter Monday holiday. Prices then eased to a low point mid-week before moving sideways. Gold peaked at $1295.5 before trading as low as $1274, and this morning in early European trade it was at $1280. Silver peaked at $18.66 before ending up at $18.00. This makes gold up 11.06% on the year so far, and silver up 13.87%. Silver is lagging gold badly, and based on its normal relative volatility should be closer to $19.00.

This is reflected in the rise of the gold/silver ratio to 70.49%, shown in our second chart. 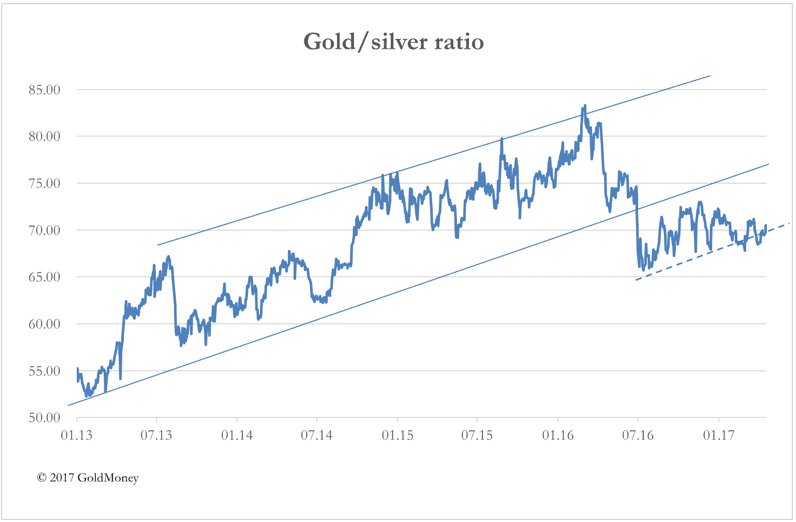 A reason that can be cited for silver’s poor performance is a general weakness in metal prices, with copper and iron ore being especially weak. China’s bank regulator is cleaning up the wealth management products market, which has invested in base metal commodities, possibly including silver. These funds have been driving prices higher against the government’s own programme of stockpiling energy and base metals, so it is hardly surprising the Chinese authorities are taking this action. But if silver is caught up in this regulatory battle, it does not appear to be reflected on Comex, because the WMPs would be sellers, reducing open interest.

At the same time, signs that the US economy is stalling have not helped the general price level, even though it is bullish for precious metals. All we can conclude is something very odd is going on. Could it be that someone with very deep pockets is taking on the Comex establishment? Watch that space.

Meanwhile, gold has generally maintained price levels against a background of increasing geopolitical risk, with a war between North Korea and the US becoming a growing risk. Gold has probably not fully discounted developments, which is evident from the subdued level of open interest on Comex. One would have expected more hedging, reflected in a jump in open interest. That has simply not happened. This is shown in the next chart.

There were at least three large sales of gold Comex futures this week, on Tuesday, Wednesday and Thursday. These can be taken to be unsuccessful attempts to lower the price level, presumably by one or more bullion banks.

The fact that gold is not overbought despite recent rises, and silver is inexplicably at record levels of open interest yet the price appears supressed, could be taken as evidence that something explosive is about to happen. But those of us that understand gold’s monetary characteristics relative to the dollar should not forget that the financial mainstream would see the dollar as the ultimate safe-haven, not gold. Perhaps this explains why gold and silver prices are not somewhat higher, and the distortions on the futures market noted above.

Finally, sterling holders of gold suffered a significant loss of value when sterling rallied strongly on the announcement of a general election, with gold falling from £1032 to £998.