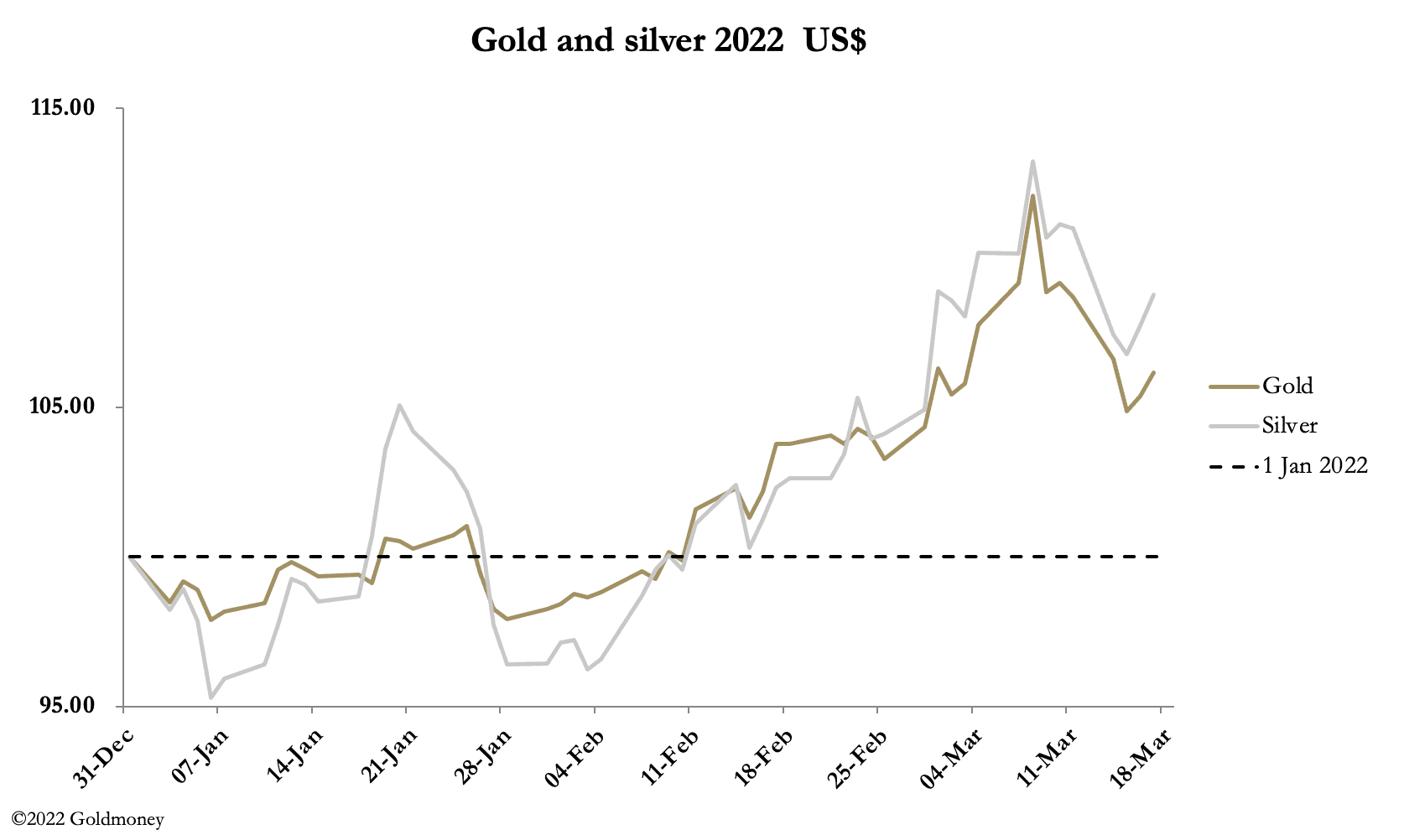 After commodities peaked last week and subsequently sold off, this week saw a continuation of falling prices before steadying on Wednesday. Gold settled at $1834 in early morning European trade today (Friday), down $54 from last Friday’s close after a low point of $1895 on Wednesday. Silver traded at $25.26, down 60 cents, having touched $24.47.

It seems odd that precious metals reacted downwards so strongly while the war in Ukraine continues. It’s not all going Russia’s way, and arguably that might make Russia more dangerous with respect to countering the West’s sanctions. It is likely that there is something else driving gold and silver.

The clue is in energy prices. In early-December, WTI oil was $61.00. On 8 March it hit $129.47, and natural gas and heating oil also rose strongly. Russia was being denied markets for its energy exports, leaving them acutely short. Yet, on Tuesday the WTI price had collapsed to $93.50 while there was no prospect of product replacement. The Saudis refused to talk to President Biden about increasing output. The Saudis preferred to talk to Russia’s Putin. Boris Johnson flew to Riyadh on the same mission and returned empty handed. Meanwhile, the London Metal Exchange had a crisis on its hands with nickel rising from under $25,000 on 25 February, briefly touching $100,000 on 8 March when trading was suspended. With a Chinese speculator on the short side and margin calls escalating, the LME itself was at risk of failing. Margin calls were squeezing the big commodity traders which are thought to have difficulty raising extra liquidity for margin calls.

Therefore, we have two reasons for intervention in commodity markets: to contain energy price rises, which are feeding into price inflation and therefore likely to lead to unsustainably high interest rates, and to save commodity derivative markets from crisis. It is therefore likely that governments, presumably led by the Americans and the largest of their commercial banks, intervened to drive prices down. But as the gold chart below shows, its bull market remains intact. 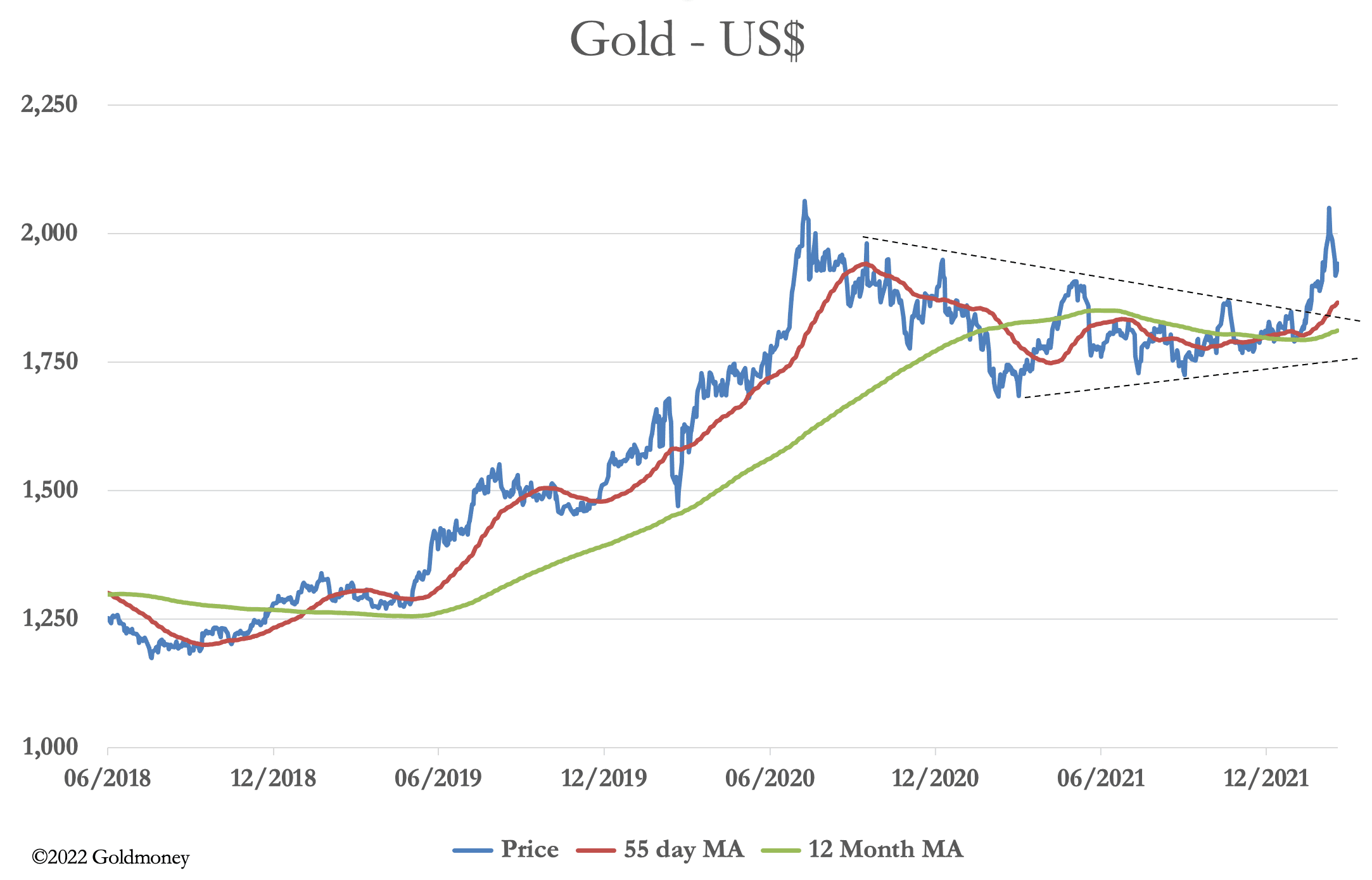 All the action is in derivatives, with losses for bullion banks accumulating to record levels. Our next chart is of the Swaps short positions on Comex, which will be updated tonight. This category is dominated by bullion bank trading desks. 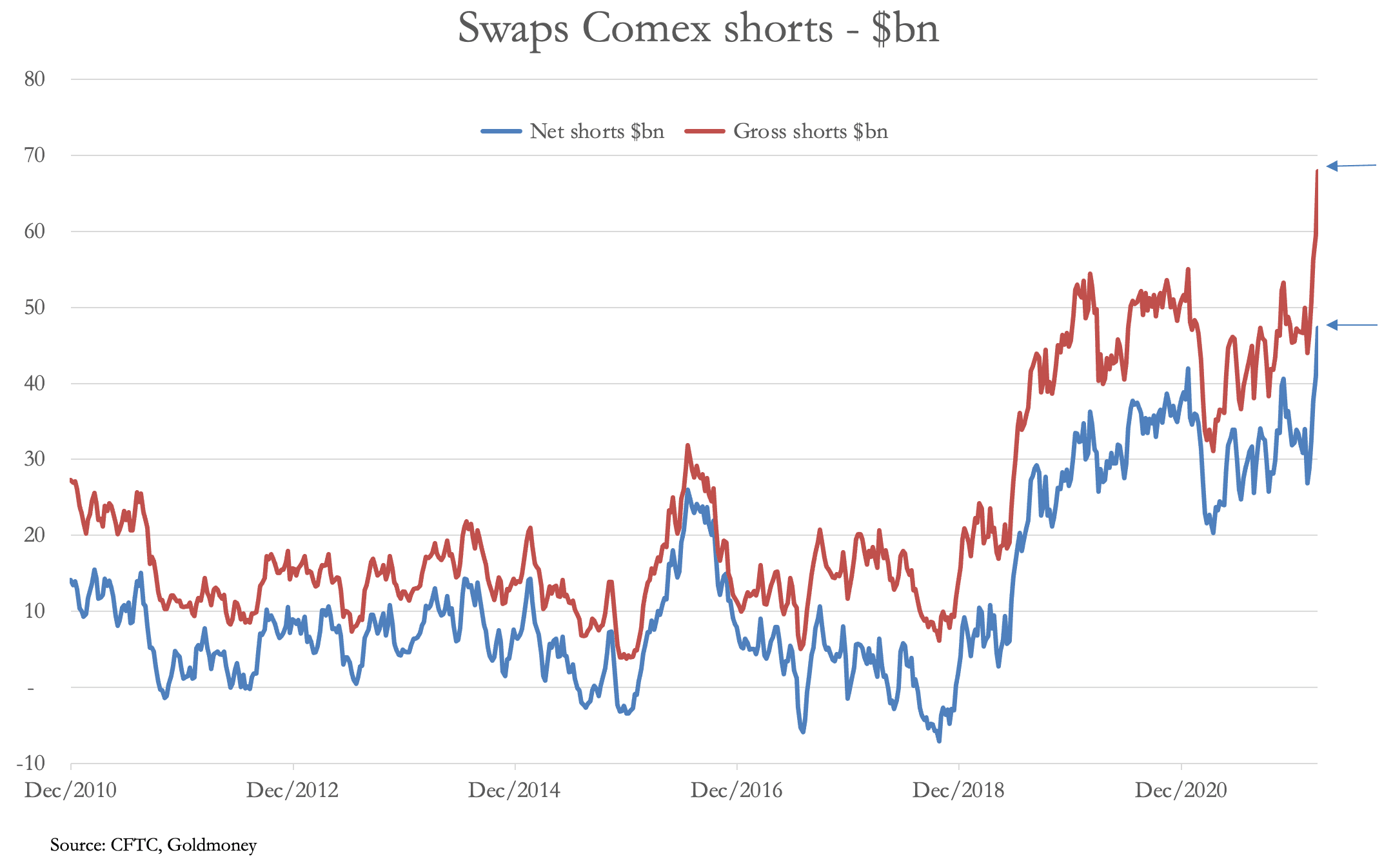 The position has eased from these extremes, but the sudden jump in gross liabilities to nearly $70bn for an average of $2.6bn per trader suggests that some of them might need bailing out.

But probably more important than the short-term easing of market conditions are the lessons learned by central banks. Their gold reserves are the most important asset having no counterparty risk when foreign currency reserves are being sanctioned. Gold earmarked at the New York Fed and the Bank of England should be unencumbered from leases and swaps for fiat. The unwinding of this essential market liquidity, perhaps involving many thousands of tonnes, could be the next thing to hit the gold market. The nickel story might be just a warm-up act for gold.