Within the eurozone there are great stresses. At one extreme there are punitive costs of borrowing for Greece, Cyprus, Portugal, Ireland, Spain and Italy; at the other there is zero or negative interest rates for Germany, the Netherlands and Finland.

Doubtless the first group begets the second, as captive investors in euros have to buy government bonds, and this requirement is being funnelled away from risk into safety.

This is the opposite of the convergence intended behind the creation of the euro. The euro itself, as can be seen from the chart below, is not looking too healthy either, and this is surely no coincidence. Furthermore, if it breaks the 1.2000 level to the US dollar, the chart will look very bad indeed. 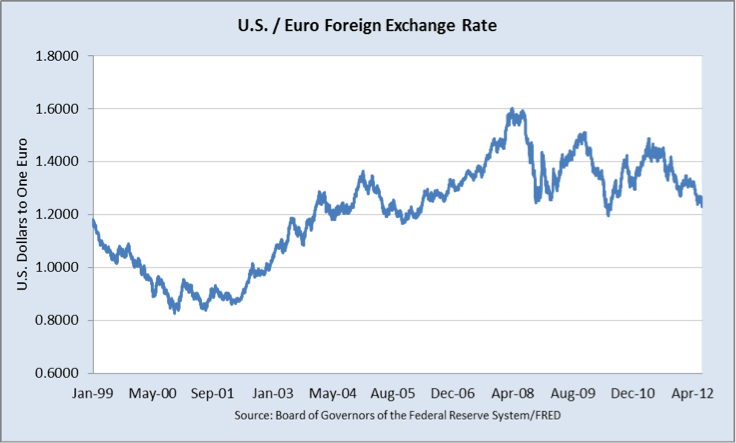 The potential weakness in the euro, which on the chart suggests there is little visible support above the $0.80 level once $1.2000 is broken, suggests current difficulties in the eurozone could begin to have a serious effect on the currency. It is time therefore to think about the euro itself.

Launched in January 1999, the original members of the eurozone bent the entry rules to qualify with respect to budget deficits and the level of outstanding government debt. This was not an auspicious start, but hey, governments bend the rules all the time, don’t they? Greece then joined two years later, and would have had a severe funding crisis if it hadn’t. This was bending the rules at a new level.

There followed what economist Philipp Bagus aptly called the tragedy of the commons. Eurozone members, who on their own would have had difficulty accessing affordable credit, used the low interest rates on the back of Germany’s rating to borrow, borrow, borrow. This was not a problem until the financial crisis of 2008, when the borrowing became progressively more difficult, and insolvency beckoned.

These are the euro’s backers. On a rough rule of thumb, measured by the commitments behind the European Financial Stability Facility, 41% of the euro’s backers have requested, or are likely to request a bailout themselves. This brings us back to the euro itself, a fiat currency that depends for its value on government promises.

The difference between this fiat currency and all others is that there is no single government guaranteeing it. They have delegated every aspect of the currency to the European Central Bank, whose balance sheet is looking increasingly precarious. Normally this would not matter, because the markets would take comfort in the backing of a single identifiable government with tax-raising powers. In this case we have 17 governments, some of them insolvent, and the solvent governments unwilling to underwrite the lot. And one of the solvent governments, Finland, is quite likely to desert the sinking euro ship: Finland is Scandinavian firstly, and European secondly. She only participates in bailouts if she obtains extra collateral. It is unlikely that she will remain committed to the eurozone project if it continues to deteriorate.

There is no identifiable government promise behind the euro and the ECB. This could begin to matter very soon, which is why that USD1.2000 level should be watched. And if that happens, interest rates for Germany, Holland and Finland are bound to rise into positive territory.