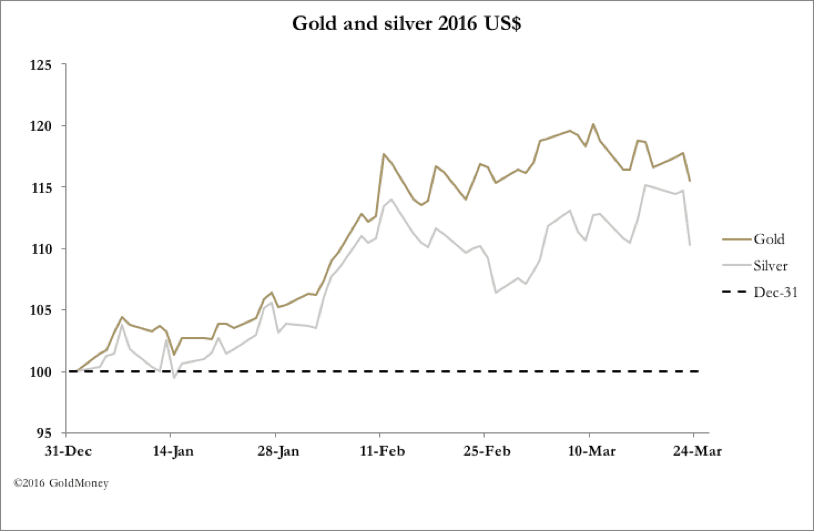 In the run up to Easter, trading in markets generally has become both volatile and thin.

It is usual in these conditions for negative factors to recede from traders' minds, and so we have seen continuing strength in equities, and a resurgence in confidence in the dollar after its recent weakness. Most vulnerable have been precious metals on the back of a stronger dollar, and also sterling, where the excuse for selling is opinion polls suggesting Brexit is more likely. In short, Easter is a period of unpredictable price moves in thin trade, similar to the period between Christmas and New Year.

Next week also has the capacity to be divorced from risk fundamentals, with Easter Monday a further holiday for many. The decline in precious metal prices seen this week may well extend into next, and it would be brave to dismiss the possibility of prices for gold and silver drifting lower, with gold perhaps testing the $1200 level, and silver maybe retracing back to $14.80.

None of this makes much sense in fundamental terms, given that the Eurozone, other European countries and Japan, have all got negative interest rates and bond yields. But in markets awash with fiat money, background factors are trumped by short-term factors.

There is a debate raging about the dollar, which has kyboshed gold and silver this week. Some analysts are in the deflation camp, and others see full employment and rising core inflation in America. The Fed is in a difficult position, with domestic considerations supporting the thesis for interest rate increases, while international considerations, with deepening negative interest rates, would suggest the dollar is likely to be strong enough against the other major currencies without interest rate rises.

Time will tell. Meanwhile, we cannot ignore the fact that the euro has the heaviest weighting in all dollar foreign exchange indices, and it looks increasingly likely that dollar exchange rates, and therefore monetary policy, will be heavily influenced by Europe. So far, traders are only expressing concerns over the growing likelihood that Brexit will happen, and the effect it will have on sterling. If Brexit happens, traders expect sterling to fall sharply lower, perhaps to $1.30 or even lower. Bizarrely, they are ignoring the effect on the euro, whose very future is likely to be threatened by a Brexit, while sterling will definitely continue to exist.

Banking problems are also likely to haunt Europe in the coming months. Deutsche Bank's problems are widely publicised, but now we have Credit Suisse, which expects substantial second quarter losses to arise from unwinding illiquid positions. Both these major banks are going through a corporate rescue process, so bad news of this sort is to be expected.

Let's put ourselves in the position of non-financial businesses and individuals in the Eurozone. They see banking risks exposed, with the potential to disrupt the whole Eurozone banking system. They are faced with zero interest, and even negative rates, on their bank balances. What do they do?

It is a no-brainer. They move their deposits into banks in another currency, not the Swiss franc now, but most likely the US dollar. And they consider buying some physical gold. It is therefore apparent that future Eurozone demand for physical gold is likely to increase, particularly on a Brexit, initially from high net worth individuals looking to place a portion of their wealth in gold, but then perhaps with the wider public following them.

This tells us two things. First, demand for physical gold is likely to limit any dips in the gold price, particularly measured in euros and sterling. And secondly, the western central banks will want to avoid this demand driving up the gold price too rapidly, because of what a rapidly rising gold price signals about fiat currencies.