You'd think that the US dollar has suddenly become strong, and the chart below of the other three major currencies confirms it. 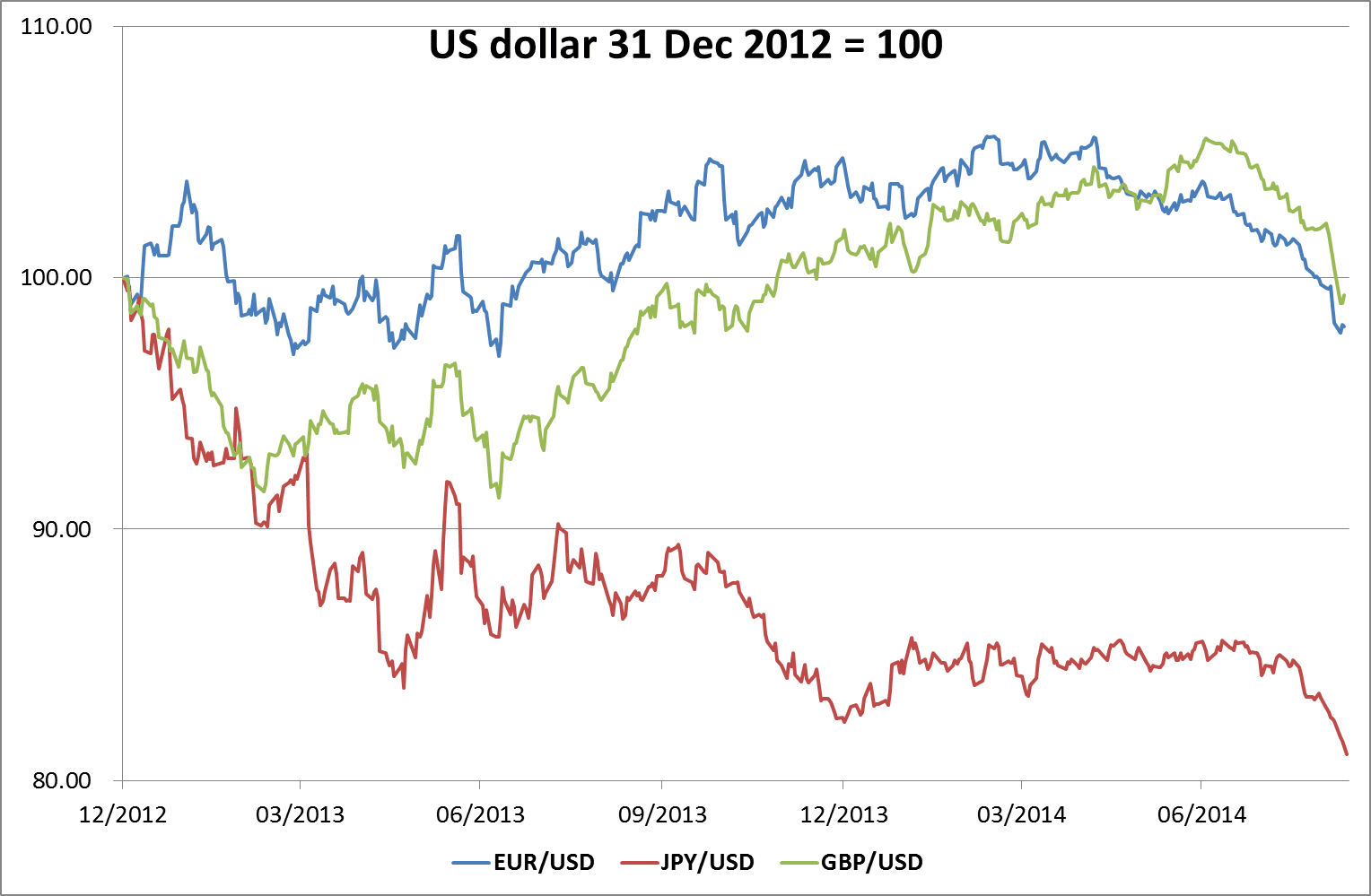 The US dollar is the risk-free currency for international accounting, because it is the currency on which all the others are based. And it is clear that three months ago dollar exchange rates against the three currencies shown began to strengthen notably.

However, each of the currencies in the chart has its own specific problems driving it weaker. The yen is the embodiment of financial kamikaze, with the Abe government destroying it through debasement as a cover-up for a budget deficit that is beyond its control. The pound is being poleaxed by a campaign to keep Scotland in the union which has backfired, plus a deferral of interest rate expectations.
And the euro sports negative deposit rates in the belief they will cure the Eurozone's gathering slump, which if it develops unchecked will threaten the stability of Europe's banks.

So far this has been mainly a race to the bottom, with the dollar on the side-lines. The US economy, which is officially due to recover (as it has been expected to every year from 2008) looks like it's still going nowhere. Indeed, if you apply a more realistic deflator than the one that is officially calculated, there is a strong argument that the US has never recovered since the Lehman crisis.

This is the context in which we must judge what currencies are doing. And there is an interpretation which is very worrying: we may be seeing the beginnings of a major flight out of other currencies into the dollar. This is a risk because the global currency complex is based on a floating dollar standard and has been since President Nixon ended the Bretton Woods agreement in 1971. It has led to a growing accumulation of currency and credit everywhere that ultimately could become unstable. The relationship between the dollar and other currencies is captured vividly in the illustration below.

The gearing of total world money and credit on today's monetary base is forty times, but this is after a rapid expansion of the Fed's balance sheet in recent years. Compared with the Fed's monetary base before the Lehman crisis, world money is now nearly 180 times geared, which leaves very little room for continuing stability.

It may be too early to say this inverse pyramid is toppling over, because it is not yet fully confirmed by money flows between bond markets. However in the last few days Eurozone government bond yields have started rising. So far it can be argued that they have been over-valued and a correction is overdue. But if this new trend is fuelled by international banks liquidating non-US bond positions we will certainly have a problem.

We can be sure that central bankers are following the situation closely. Nearly all economic and monetary theorists since the 1930s have been preoccupied with preventing self-feeding monetary contractions, which in current times will be signalled by a flight into the dollar. The cure when this happens is obvious to them: just issue more dollars. This can be easily done by extending currency swaps between central banks and by coordinating currency intervention, rather than new rounds of plain old QE.

So far market traders appear to have been assuming the dollar is strong for less defined reasons, marking down key commodities and gold as a result. However, the relationship between the dollar, currencies and bond yields needs watching as they may be beginning to signal something more serious is afoot.