The Fed seems to have managed to halt the massive dollar squeeze and the associated strength in nominal yields and real-interest rate expectations.  This has led to a reversal of the rather peculiar gold sell-off that started in early March. We think this short-term win for the Fed to come at the expense of sharp currency depreciation over the medium term. We expect this to be very bullish gold medium term.

Just a week ago, we published a report with the title “What is holding gold back?” (What is holding gold back, 20 March 2020). In that report, we analyzed the odd downward move in gold since early March amidst a global pandemic, crashing equities, unchecked central bank intervention and the prospect for the largest fiscal stimulus bills the world has ever seen. We conclude that the main reason for this sell-off – a sharp rise in real-interest rate expectations – was temporary and could turn on a dime. We didn’t have to wait long.

In order to get a better understanding of what was going on, in last week’s report, we took a closer look at the main drivers of gold prices, which we had identified in our gold price framework (Gold Price Framework Vol. 1: Price Model, 8 October 2015). What we found was that a sharp spike in real-interest rate expectations was mostly responsible for the move from $1700 to $1450. As we noted in our March 20 report:

Starting in late February, 10-year Treasury yields began to move sharply lower, in anticipation of Fed rate cuts. The Fed delivered in an emergency meeting on March 3, cutting rates by 50bp. Rates continued to move lower until March 9, 2020. By that time, 10-year treasury yields had fallen to just 55bps. However, simultaneously, long-term inflation expectations also began to fall sharply. By March 9, 10-year breakeven inflation expectations were just 1%. However, what happened next must have been a bit of a shock to the Fed. 10-year treasury yields began to rise. The Fed held a second emergency meeting on March 15, 2020, where it cut rates to zero. But this didn’t stop nominal yields, By March 19, 2020, 10-year treasuries rallied back to 1.15%. At the same time, long-term inflation expectations continued to collapse and are currently at just 0.5%.

The collapse in inflation expectations and the rise in nominal yields pushed real-interest rate expectations from -.057% to +0.55%. This is what caused the $250/ozt price decline in just 7 days (see Exhibit 1). 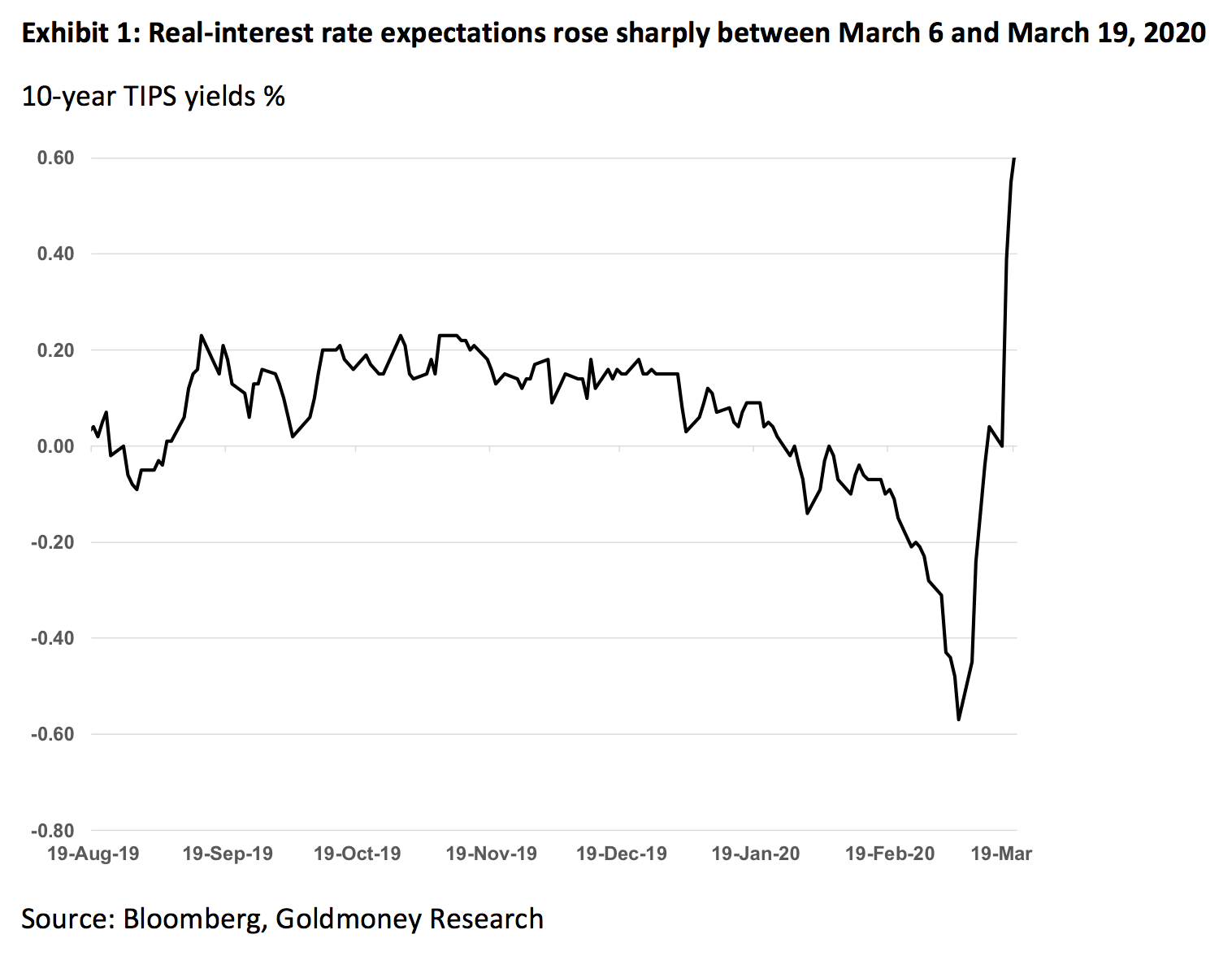 As we expected the Fed to continue to intervene and to do whatever it takes to get this dollar strength under control, in our view the strength in real-interest rate expectations was temporary and could turn on a dime. This is exactly what happened when the Fed announced open-ended QE three days later. This desperate measure seems to have achieved what the Fed was aiming for; namely stopping this dollar strength (and consequently, the rise in nominal and real-interest rates). At the same time, a gigantic $2tn stimulus package has been passed by the senate

On the day of publishing of our report (20 March 2020), real-interest rate expectations and the dollar had already shown some signs of easing. Over the subsequent 3 days, we saw a massive reversal of this short-term dollar and rate strength, and as a result, gold prices rallied >$150/ozt from the lows (see Exhibit 2). 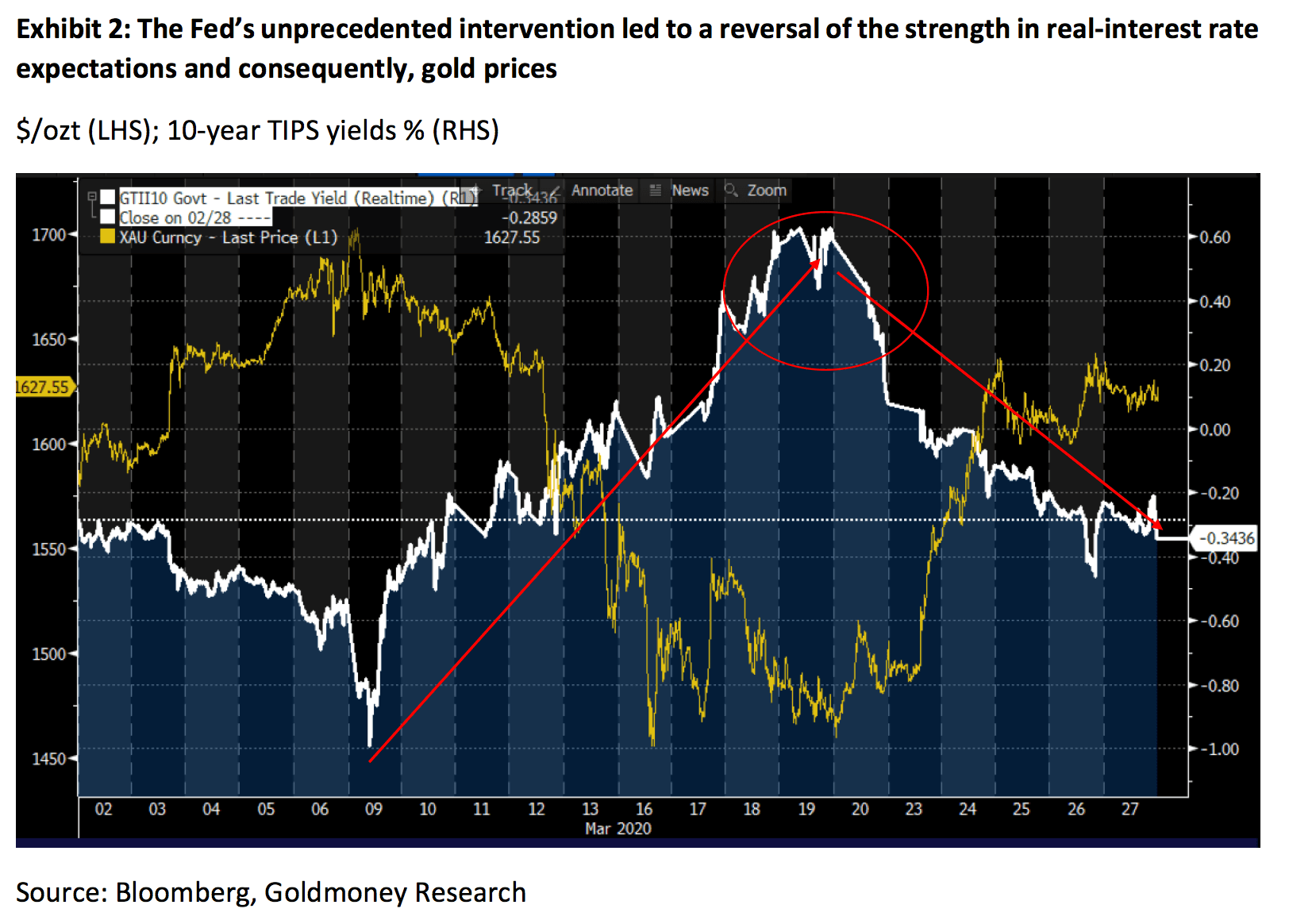 So, what’s next? We think this is just the beginning. The dollar tightness seems to be easing, but it will require the Fed to remain a permanent buyer of bonds. This will inevitably lead to a large expansion of the Fed’s balance sheet, at least similar in size to the expansion in the years 2008 to 2014. In fact, the speed at which the Fed was forced to expand its balance sheet last week is staggering. The Fed’s balance sheet rose from $0.9tn in summer 2008 to $2.0tn a year later, an increase of $1.1tn. It took the Fed just 4 weeks to do the same (see Exhibit 3). And we haven’t even received the latest numbers yet. 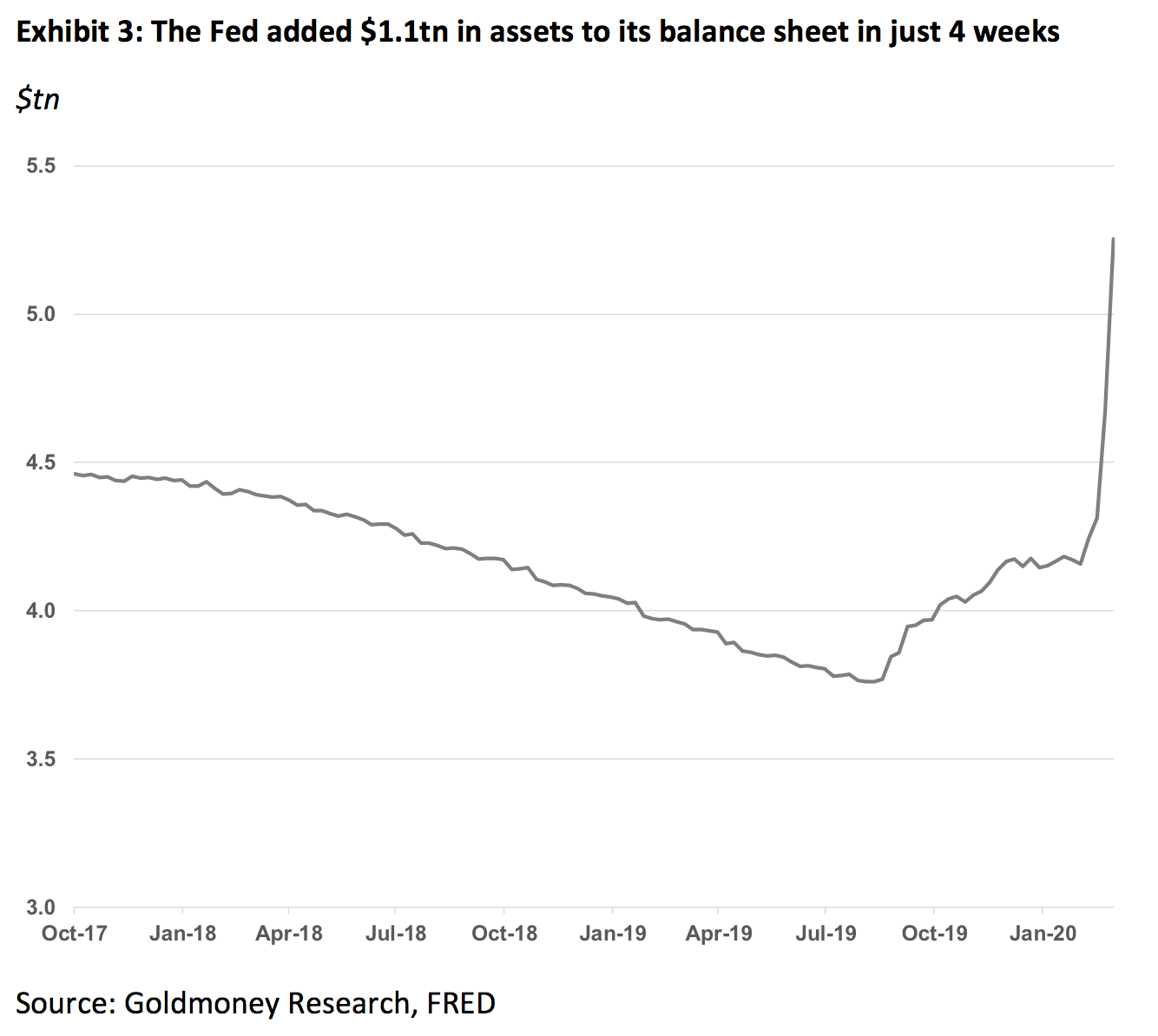 As for fiscal stimulus, the current $2tn will almost certainly not be the last package to be passed. Equity markets greeted the bill pre-emptively with a >10% rally, but since then, equity prices have stalled again. Given our view that the global economy had been slowing down sharply prior to the coronavirus outbreak, a roaring comeback of the economy, once the virus itself subsides, is unlikely. Hence, we expect more and most likely larger fiscal stimulus bills over the coming months.

On top of that, we are seeing a run on physical bars while at the same time, supply has become tight. The widespread lockdown due to the Coronavirus outbreak led to the shutdown of many refiners. Physical gold is also trapped at the wrong locations as usually bullion is shipped with commercial flights, which are now grounded.  Many coin and bar dealers indicate huge premiums, or, are even sold out. Major Swiss banks have opened waiting lists for their clients wanting to buy physical bars. Over the past days we have also witnessed an epic short squeeze in the futures market as Goldmoney Head of Research Alasdair Macleod wrote in his latest market report (Bear squeeze on bullion banks, 27 March 2020).

We believe this to be the beginning of a substantial currency devaluation cycle. While the pressure on the dollar will be particularly large, other central banks will be unlikely to let their currencies massively appreciate against the dollar. We also expect fiscal stimulus packages (similar in relative size to the US) in most countries over the coming months. Hence, we expect all fiat currencies to substantially depreciate over the coming years.

There are no central banks that can print gold and other precious metals; hence, we expect substantial price gains over the coming years. In our last report, we set $2600 as the minimum target for gold over the medium term, but we also highlighted that this is the price target if central banks manage to kick the can down the road one more time (see Exhibit 4). As this crisis rapidly unfolds, the risks for the alternative outcome – central banks are losing control over inflation - are steadily increasing. 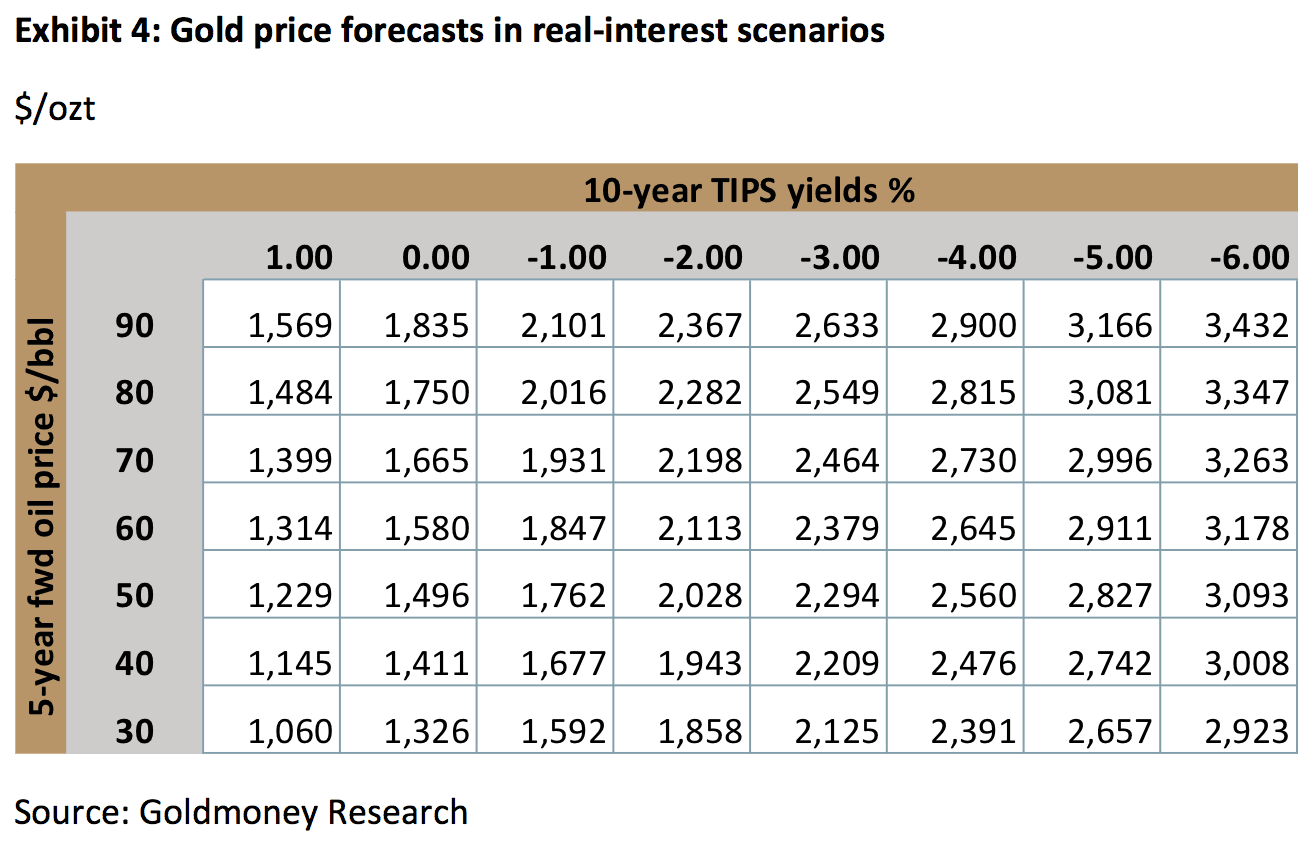