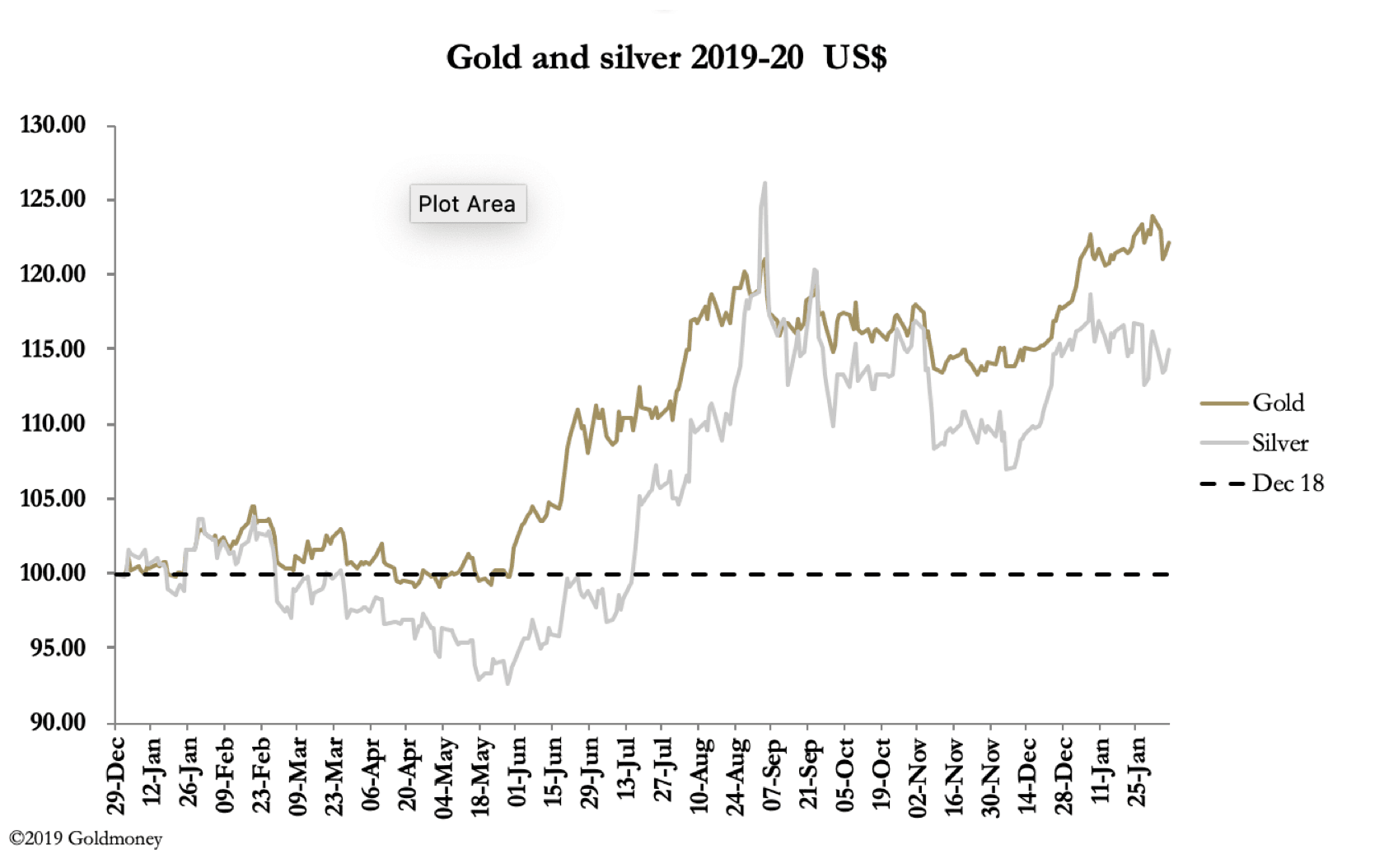 In very quiet trade, gold and silver remained in consolidation mode this week. From last Friday’s close, by morning trade European time gold had drifted $12 lower to $1568, and silver by 25 cents to $17.78.

News was dominated by the coronavirus, which is now spreading beyond China. At the time of writing, officially there were 31,515 cases, 638 deaths and 1,665 recovered. But these are predominantly figures supplied by the Chinese government for all but 300 cases and are not widely trusted.

Financial markets are behaving as if this virus is irrelevant, with bond yields subdued and equity markets rising strongly. In fact, most of China’s production has been shut down indefinitely, with negative consequences for all the other economies supplied by Chinese production. For example, Hyundai, the South Korean car maker, has been forced to close all its factories due to the lack of Chinese supplied components. China has even rescinded trade tariffs against US imports, presumably in an attempt to alleviate short supplies from the closure of its own factories and suppliers.

So far, the coronavirus is classified as an epidemic, broadly confined to China. There are increasing signs of it turning into an officially classified pandemic involving other countries. If the World Health Organisation so pronounces, it will pose a major challenge to prevailing investor optimism.

This gives wannabe gold investors a short-term dilemma. A pandemic threatens to close down human interaction, driving the world into an unexpected slump, as deep as you care to imagine. Investor myth is that these conditions are deflationary and bad for gold, on the basis that a collapse in demand for goods raises the purchasing power of circulating currencies. The thesis does not bear examination, but reality is a victim of mythology in these strange times. Raising their sights just a little allows investors to observe the authorities’ certain response, which will be to increase inflationary spending, massively.

Not only do governments face economic stagnation, but indebted businesses risk being driven to bankruptcy as sales collapse and banks will face escalating losses. Not only will governments be bailing out banks, but they will be called upon to rescue failing businesses as well.

Perhaps the transition from epidemic to pandemic will be the trigger for markets to awaken to this prospect. While the immediate mispricing is in equity and bond markets, for the gold is a pet rock theorists there will be complacency over the bullion banks’ short position in precious metals.

Over the last fortnight the short-term position on Comex has been substantially addressed, with open interest falling by about 150,000 contracts since mid-January, bringing it down to more normal levels. This is shown in our second chart, below.

This chart shows that the fall in open interest has not been matched with a corresponding fall in the gold price, which should be regarded as bullish. Increasingly, the remaining question is not will the gold price will go higher, but when.