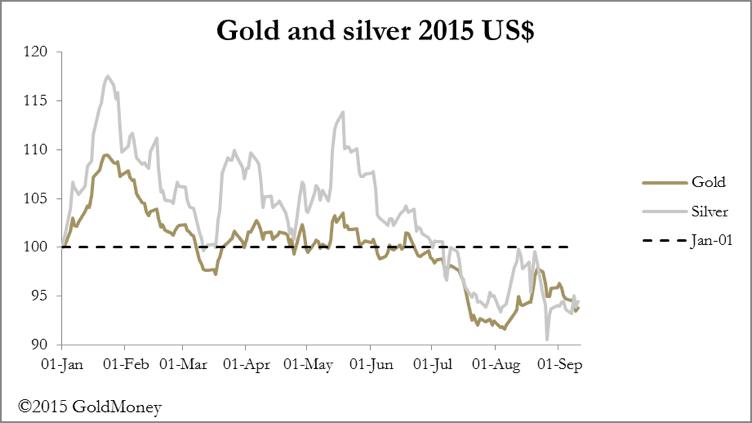 The remarkable statistic in an unremarkable week was that the ratio of deliverable gold to outstanding Comex gold contracts fell to less than one in two hundred. So long as the holder of an expiring contract has the right to insist on delivery, this could become a problem.

Comex vaults classify physical gold as registered, in which case the owner is prepared to deliver it into the market if called upon to do so, or eligible, which is gold held in custody on behalf of the owner who is not prepared to let it be delivered into the market. It is therefore not a simple matter of reallocating gold from eligible to registered in order to cover delivery shortfalls. For this to happen, either the owners of eligible have to be incentivised to give up their ownership temporarily, or it is reallocated without their knowledge. The fungibility of gold and the opacity of the system are leading to unsubstantiated suspicions the latter is happening. (See this article from ZeroHedge)

Besides the odd spike, the ratio of registered gold in Comex vaults to outstanding contracts has averaged one in twenty or thirty, so today's lack of deliverable (registered) gold indicates an extremely tight physical market, and with it a heightened risk of market failure.

The ZeroHedge article referred to above, if nothing else, confirms the gold market is plagued by disinformation, not limited to Comex. Besides the conflict between the bears in the futures market and the physical bulls, on one day we are told of record Indian gold and silver imports at 126 and 1,400 tonnes respectively for the month of August (Koos Jansen), and of Indian gold demand "remaining weak" (HSBC). The former is a hard number, the latter an opinion, but it is opinions that are quoted most in the mainstream market commentaries.

Also in August, Chinese public demand reported on the Shanghai Gold Exchange totalled 265 tonnes, so between India and China identified demand exceeded the world's monthly mine output by about 56%. Given anecdotal evidence of increasing physical demand from elsewhere in Asia and also in western markets by the general public, the drainage of physical gold previously available to cover futures and forward contracts, as well as unallocated bullion bank accounts is at very high levels. No wonder there is so little registered gold in the Comex vaults.

In trading this week, precious metals' prices steadied, showing little movement with the exception of Wednesday, when gold and silver were marked down on the release of US job openings, which showed a greater than expected jump. The Fed apparently places an emphasis on this number when deciding interest rate policy, so the futures market factored in a greater chance of a rate rise next week. However, yesterday the Wall Street Journal's Jon Hilsenrath, who is reckoned by many to be the Fed's "unofficial mouthpiece", played down a potential rise, allowing precious metals to recover some of Wednesday's lost ground. Gold ended down one per cent over the week and silver rose by the same amount.