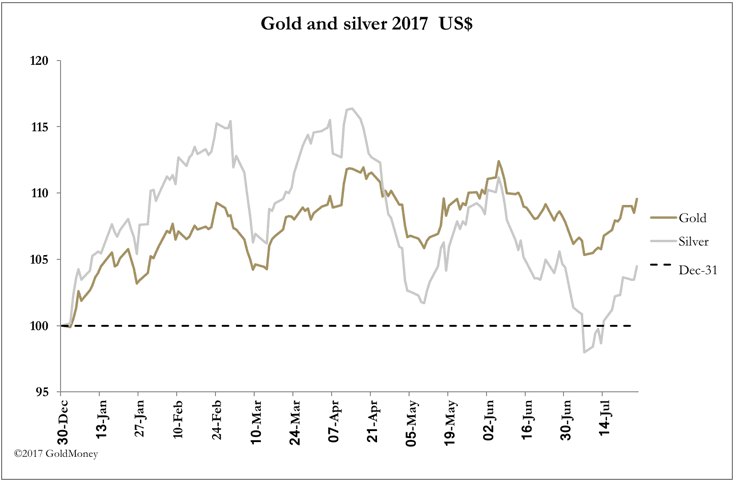 Comex futures volume has been normal, but there’s something unusual happening, best exemplified by silver. We know that the bullion banks have shaken out the speculators (mostly hedge fund longs), and the flash-crash referred to above will have taken out the speculators’ stops, enabling the banks to close their short positions profitably. This (as of Tuesday, 11 July) left the managed money category (i.e. hedge funds) net short of 6,361 contracts, representing 31.8 million ounces. The extremeness of this position is shown in our next chart, only exceeded once, in mid-2015. 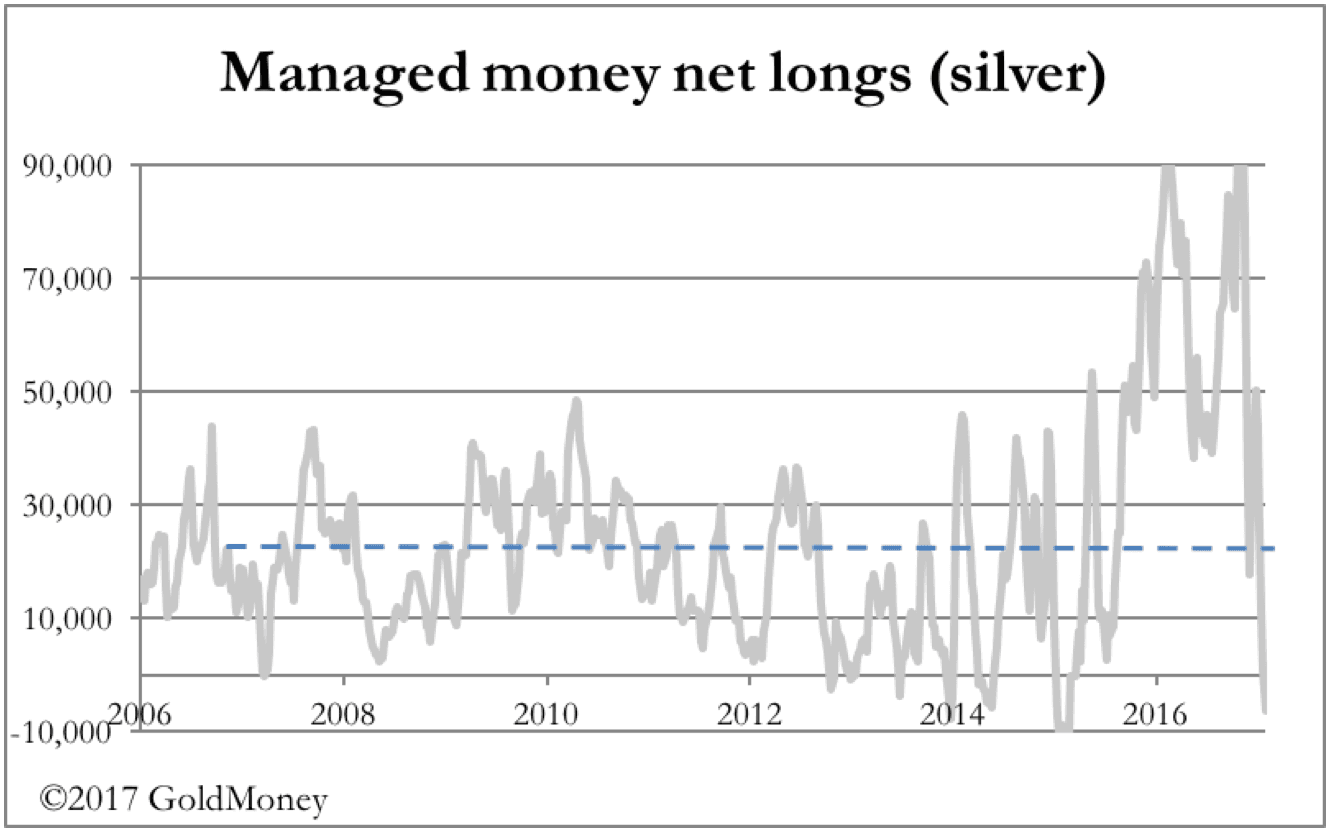 Even more interesting is the degree of naked bearishness, the level of the shorts themselves without the offset of longs. See our next chart of the managed money shorts, which is at all-time record highs (62,058 contracts, or 310.3 million ounces, roughly 36% of annual mine production). 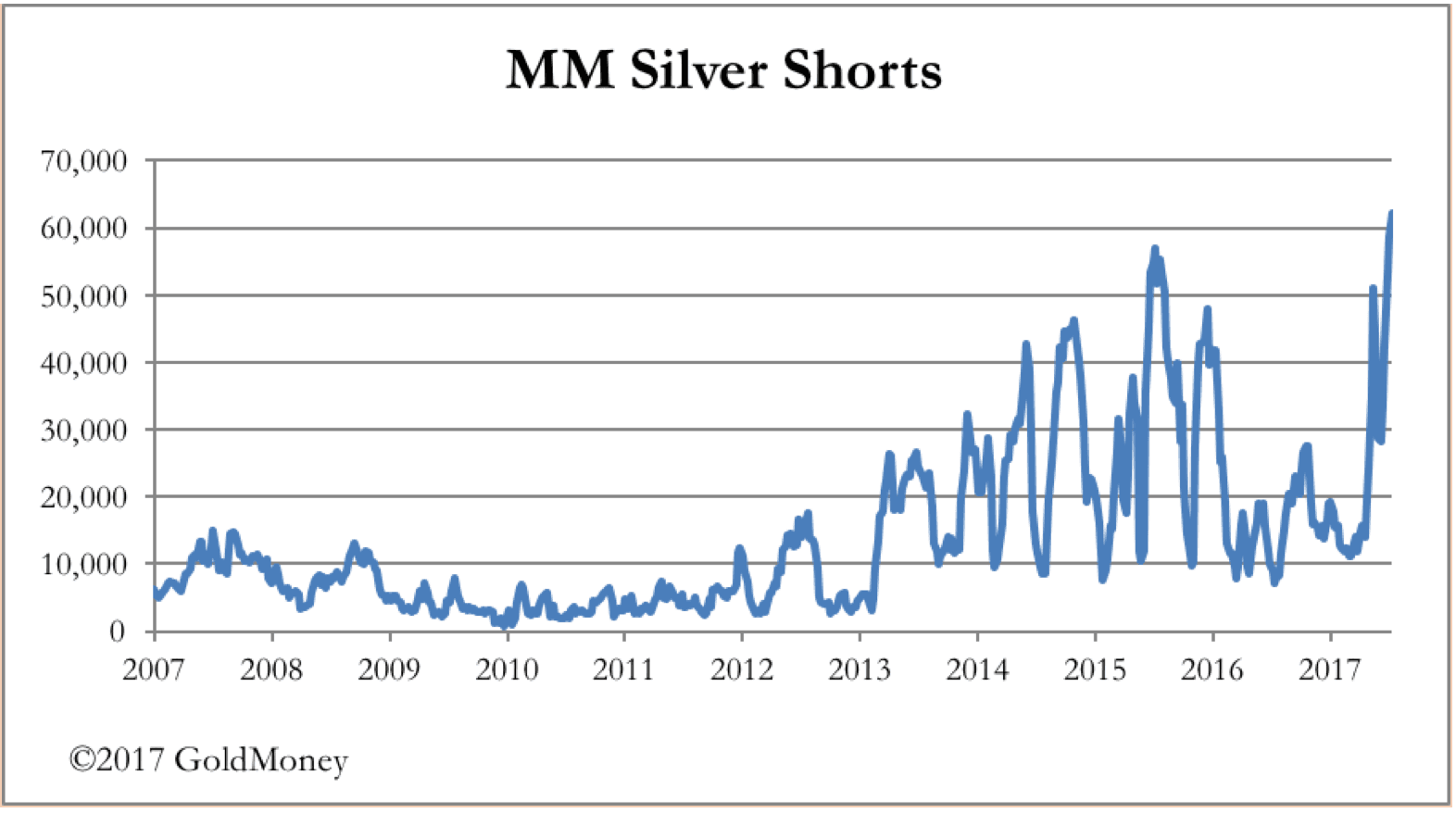 These are extraordinary positions.

We should all know by now that the price of silver (and gold) is driven by the opposing interests of the bullion banks and the hedge funds. Always, and the only possible exception was when the Bunker-Hunts tried to corner the silver market in the 1970s, the bullion banks win in the end. They give the hedge funds enough rope to hang themselves, before printing artificial supply out of thin air to overwhelm them, forcing them to close their longs at a loss.

Not only does this cycle of events result in the rise and subsequent fall in the silver price, but it also explains why the level of open interest changes. When the speculators are bullish and buy, they are supplied with fresh contracts, matching the shorts created by the bullion banks. When they turn bearish, tricked by the bullion banks into closing their positions, open interest falls. Therefore, we would expect changes in open interest to be in phase with changes in the price. And this is indeed what normally happens, as shown in our next chart, at least until earlier this year.

This correlation was tight, until signs of instability in the relationship began to appear when the price topped $18 last February. From April, open interest and the price have diverged noticeably. Note how on the previous rinse-and-wash between June and December last year, OI fell from over 235,000 contracts to under 160,000 (down 32%). Now note how OI is holding at 207,800, only 12% below its all-time high on 20 April.

What does this tell us? First, we should note there is a high level of producer hedging going on, with miners, recyclers, refiners, and industrial buyers hedging their commodity costs in uncertain times. Second, the managed money category is so bearish, it has been initiating contracts by shorting silver futures (confirmed by our third chart). This is rare. And third, not mentioned so far, the level of managed money bull positions has not declined as much as one would expect, remaining stubbornly high at 55,697 contracts. This last feature indicates that longer-term money, holding silver through futures as a cost-effective investment medium, is of increasing importance to the market.

Putting it all together, the conditions exist for a good rally in the price for the following reasons:

These conditions generally apply to gold as well, though the situation is not so striking. There have been days when the gold price has rallied, and OI fallen, confirming the conditions are fundamentally of a bear squeeze, which could go much further.

And a last point. The dollar has been very weak in recent months, barely reflected in commodity prices generally, suggesting the whole physical complex has become mispriced from the currency side. How this unwinds is likely to dominate markets for the rest of this year.