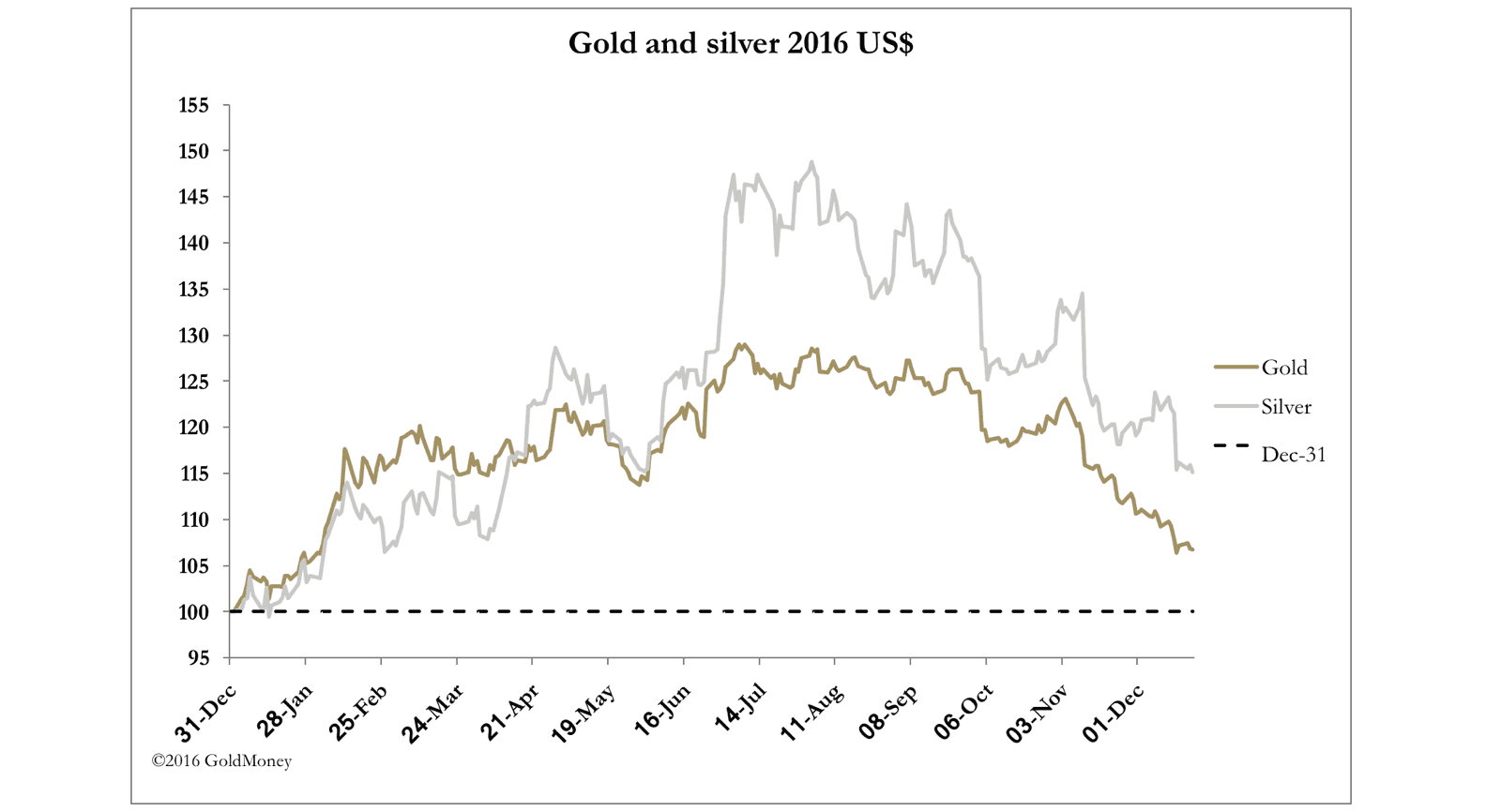 Gold and silver drifted slightly lower over the week in quiet pre-Christmas trade.

Again, precious metals are reflecting a strong dollar, rather than anything fundamentally wrong with gold and silver. The last two months have seen a strong dollar revaluation upwards against all currencies. Gold fell $7 from last Friday’s close, to $1131 in early European trade this morning, and silver by 17 cents over the same time frame to $15.82.

The battle in the futures market is between the bullion banks and the managed money category, which is mostly hedge funds. The next chart shows the current position for managed money on Comex.

The average net long figure over the last ten years is 113,130 contracts. The recent figure is 68,718, so Comex is oversold on this measure. Meanwhile, in the physical market demand has been ratcheting up, taking advantage of low prices, the result of futures speculation.

Russia continues to buy gold for its reserves, adding a further 31 tonnes in November. The other founder members of the Shanghai Cooperation Organisation have recently also been adding to their official reserves. Meanwhile, at current prices there are significant premiums for spot gold in India, where prices as high as $1700 per ounce are said to have been paid.

Prices in India are highly artificial, due to the removal as money of up to 90% of cash in circulation, and amid stories about aggressive tax raids on ordinary people. However, you don’t have premiums of 50% arising without gold smuggling increasing. All that is happening is demand for bullion is being driven underground, to the detriment of legitimate import and refining business. The Indian government’s actions will end up collapsing the economy and most likely the rupee as well, in which case measured in worthless currency gold’s premium doesn’t look so silly. India’s demand for gold, recorded and smuggled, is increasing.

The most recent rumour is the Indian government is considering reducing the tax on gold imports from 10% to 6%, recognising the damage being done to legitimate gold businesses. It is a typical government response to an earlier policy error, which fails to recognise the changed circumstances. The only way to correct the situation is to fully reverse earlier policy errors, and no government ever does that.

In China premiums are up to $40, which is extremely significant in what amounts to a large and liquid market. Next up, we have Europe, with its Italian banking crisis, which is just entering a new phase. The Italian government is trying, against the EU’s rules, to take over Banca Monte dei Paschi di Siena, which has failed to find private sector rescuers. Banks in Europe are not only suffering from bad debts on their loans, but the losses on government bonds are mounting, leading to growing concerns about euro deposits.

These factors are likely to become significant in the coming months. However, before then we have the year-end to contend with, and the bullion banks’ dealers will wish to keep prices as low as possible to maximise profits upon which their bonuses are based.

Our last chart is of gold in the four major currencies, presented without further comment. 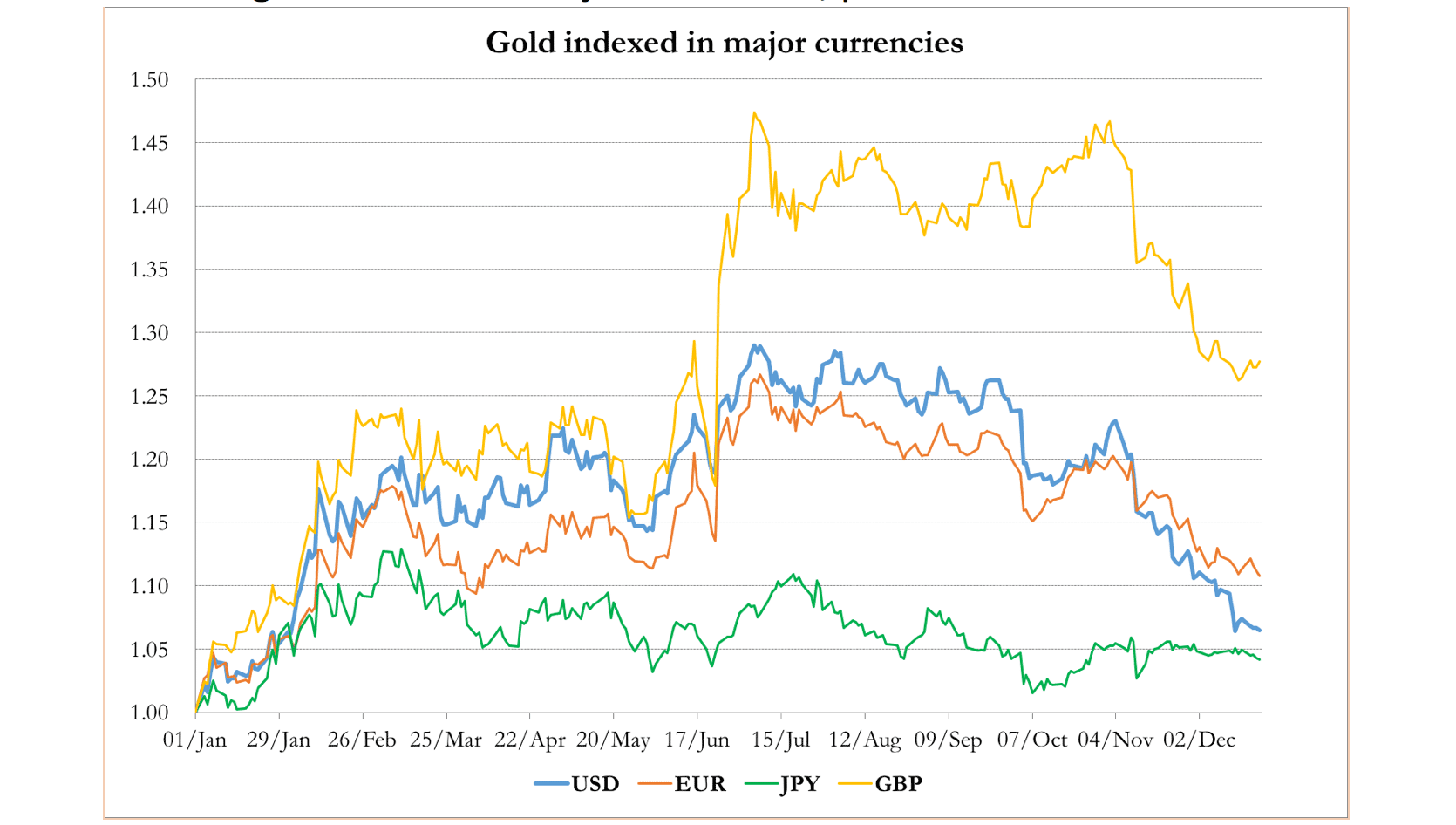