According to data published by the World Gold Council, China’s gold reserves were the 6th biggest in the world (as of February 2013), but they amounted to only 1.7% of the overall Chinese foreign exchange reserves. The same ratio stands at 75.7% in the U.S., 72.8% in Germany, 72.1% in Italy and 70.5% in France – all countries surpassing China in the tonnage of gold held in their official vaults. It is obvious that there is room for growth in China’s gold reserves. Even if it were only to catch up with Japan (3.2%), it would have to almost double its gold holdings.

Let’s take a look at the growth of China’s foreign reserves. 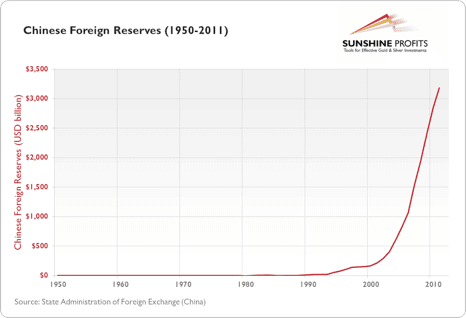 From 2000 to 2011 China’s foreign reserves grew more than 18-fold (!). This growth wasn’t stopped by the 2008 financial crisis. The sheer size of these reserves makes them relatively difficult to manage. It is easy to imagine that any decisive moves by the State Administration of Foreign Exchange (the Chinese government agency responsible for managing foreign reserves, abbreviated to: SAFE) may cause a critical disruption in the functioning of securities markets. Because of the fact that SAFE tries to make any necessary adjustments to foreign reserve holdings without shaking the market, there is significant inertia in their whole management process.

Since 2002 the trend in US debt has been one way – up. China was an important buyer of US securities, as shown on the chart below. 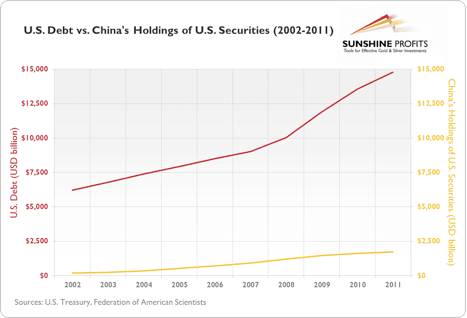 The problem of course is that this mammoth accumulation of US liabilities leaves the Chinese excessively exposed to a weakening dollar. The threat Beijing faces on this front was perhaps best illustrated on August 5, 2011 when Standard & Poor’s downgraded US sovereign debt following a power struggle in Congress over the debt ceiling. More trouble can be expected this year as another showdown over the ceiling is expected to take place in May following the fiscal cliff quarrel over the New Year period.

Problems with US government solvency are only one part of the story, however.

The Chinese currency, the renminbi, is in a managed float, which means that it is actively managed by the People’s Bank of China via market operations to stay within a desired band. In such a setting, renminbi cannot appreciate or depreciate strongly against the dollar unless the People’s Bank of China allows it to or is unable to stabilise the exchange rate. Because of the fact that the Chinese economy is growing more rapidly than the American economy, the renminbi is expected to continue to appreciate against the dollar. The People’s Bank of China may try to resist the appreciation to some extent (thinking that appreciation will hurt exports), but as an economy grows relative to other countries, currency appreciation is the natural dynamic – while political pressure from developing countries is pushing for a stronger renminbi.

Since 2005 the renminbi has gone through a series of appreciation jumps. 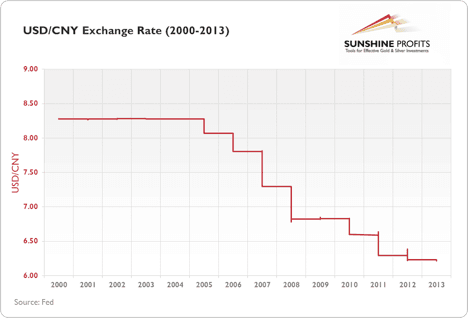 The chart displays the USDCNY exchange rate. Upward movements in this chart mean the dollar is gaining relative to the yuan. Conversely, changes to the downside show the yuan appreciating against the dollar.

As we can see, the exchange rate goes virtually one way – down, in a series of jumps. These “jumps” are the moments when the People’s Bank of China revises its target exchange rate – in other words, when it allows the yuan to appreciate. In the long run the appreciation of the yuan (renminbi) will continue for many years.

All of the above points suggest that China may in fact be disinclined to buy much more US debt. Other information shows that instead of buying more US bonds, the Chinese authorities are diversifying into gold.

Przemyslaw Radomski is Founder and Editor-In-Chief at sunshineprofits.com.