Gold and silver prices moved further ahead this week, with gold up by $21 from last Friday’s opening (Friday was a strong day) to $1287 in early trade this morning (Thursday).

[Regular readers of this market report should note that it is written a day earlier than usual, because of the UK’s general election.] 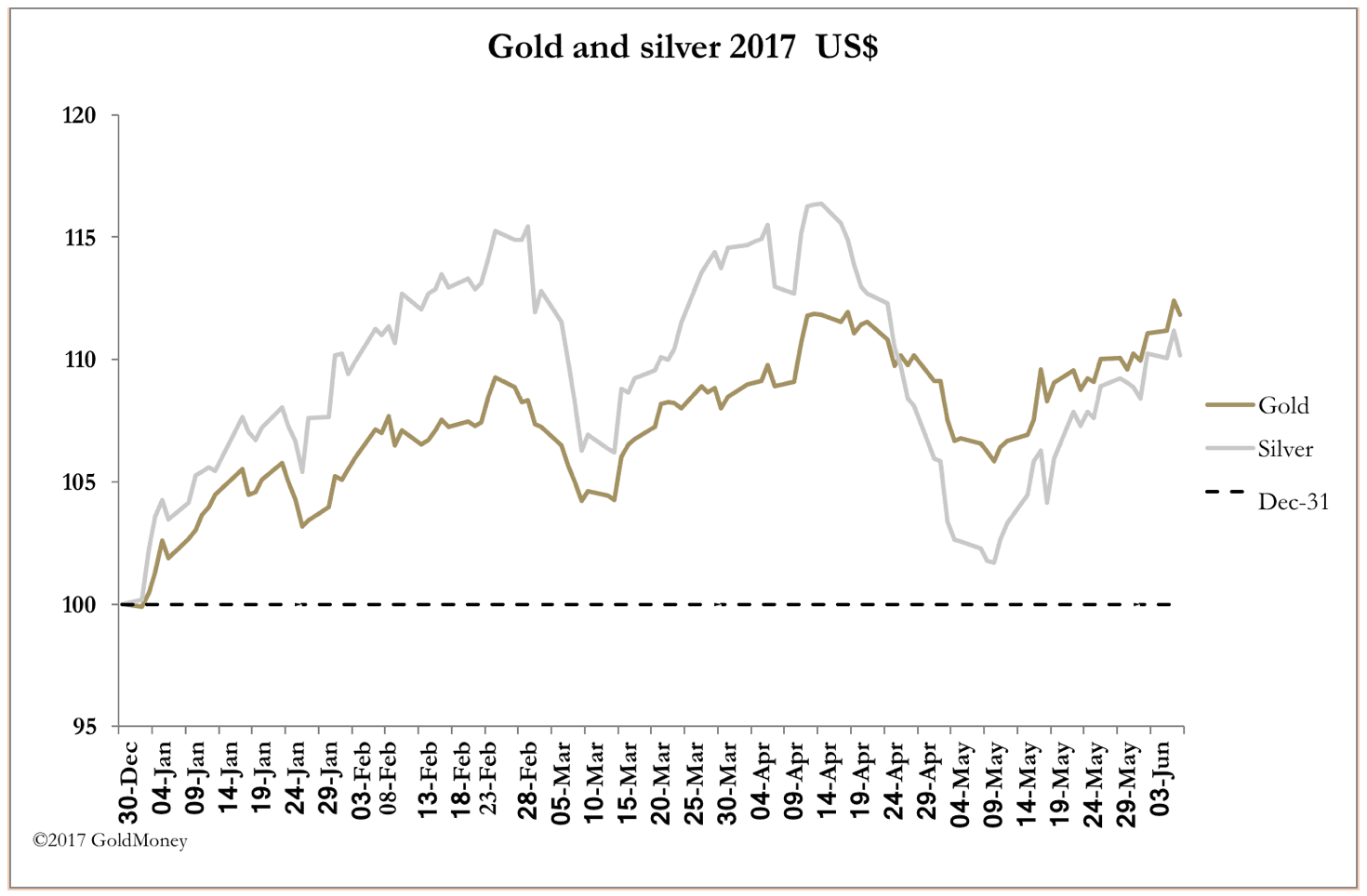 Gold and silver prices moved further ahead this week, with gold up by $21 from last Friday’s opening (Friday was a strong day) to $1287 in early trade this morning (Thursday). Silver has also recovered from $17.27 to $17.65 over the same time scale. Importantly, gold rose on Tuesday towards the $1300-level, fractionally exceeding the previous test in mid-April, which makes this move up from the $1220 level significant.

So far, it has been mostly a bear squeeze on long dollar/short gold positions. But technically, there has been a strong reversal of fortunes for gold, as our next chart illustrates. 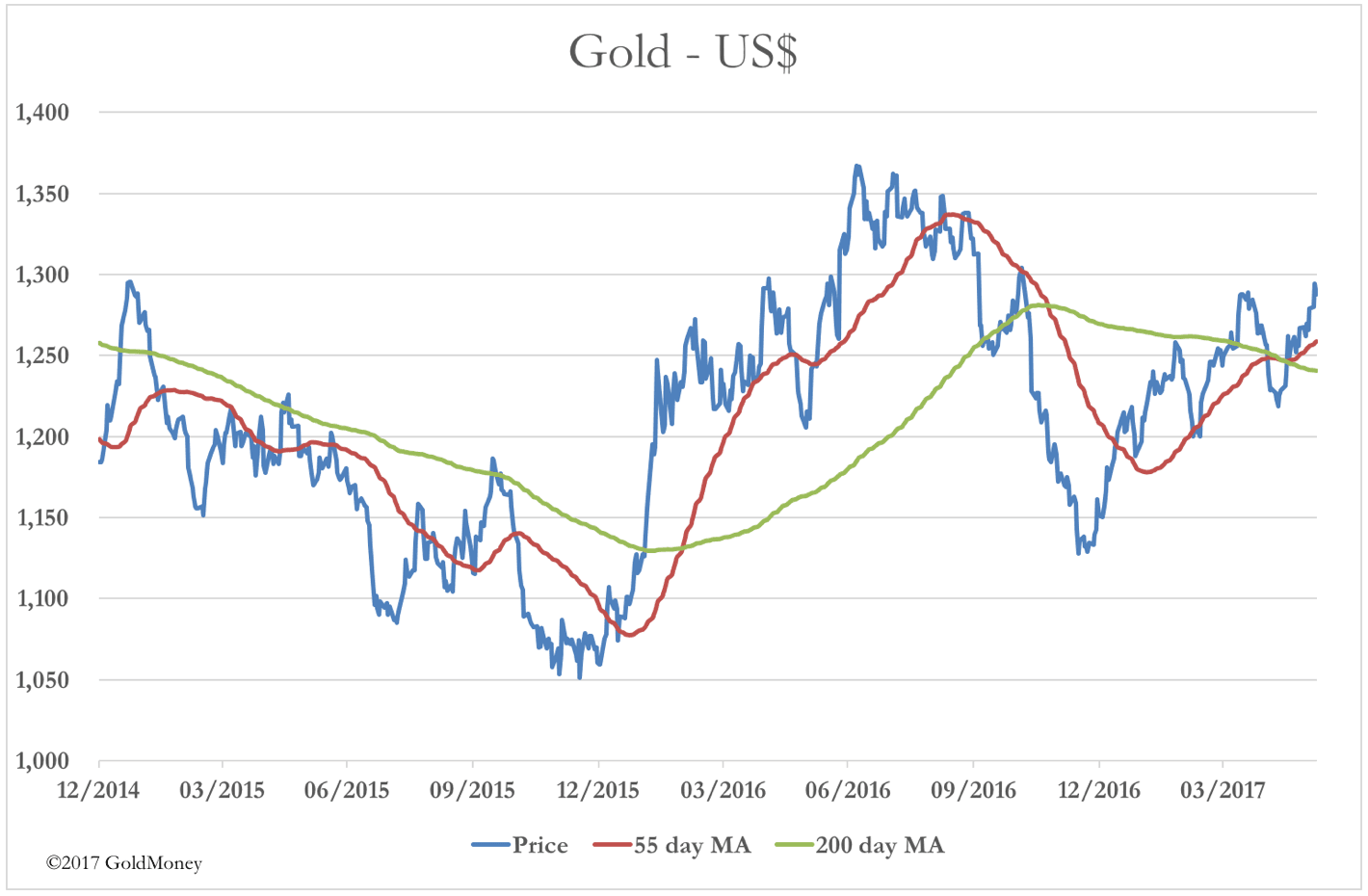 The power of the drive through the two most watched moving averages, which look increasingly to be confirmed as a text-book “golden cross” (the shorter moving average rising above the longer, with the price higher than both) is being taken positively by traders. The result is traders are beginning to open long positions, tipping the consensus view towards bullishness.

This is confirmed by the surge in open interest on Comex. This is illustrated in our next chart, of open interest and the gold price. 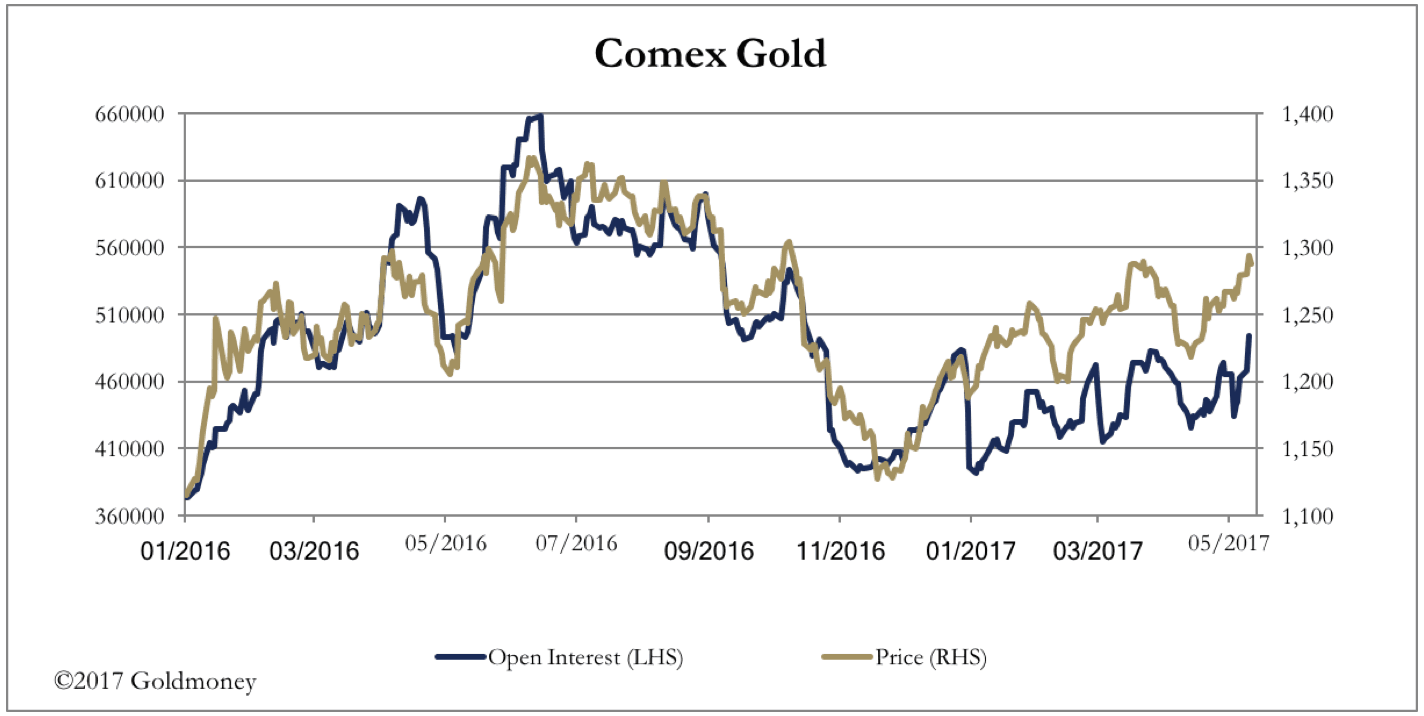 On this measure, gold is far from being overbought, moving back into neutral territory. The principal driver, as far as Comex is concerned, is continuing weakness of the dollar, principally against the euro. However, there are signs of a potential increase in demand for physical bullion.

As well as Asian central banks looking to add to their reserves on dips in the price, it was reported this week that India is to introduce a sales tax of 3% on gold sales, when 5% was discounted in the market. This can be taken as overall bullish, in that reported gold imports are now expected to rise to the 1,000-tonne level for this year. The Indian Government’s apparent friendliness towards gold is probably practical. The history of the government trying to tax gold, or restrict imports has merely fuelled smuggling to the disadvantage of businesses operating above-board. Tax revenue therefore falls, while the policy fails.

But Indian demand is demonstrably strong, and this is a likely consequence of Modi’s ill-advised move to suddenly ban physical cash last year.

Middle-East tensions are rising again, with Qatar being ostracised by Saudi Arabia. It looks like an American mistake, because it follows Trump’s visit to the region, and he tweeted to the effect of good riddance to a terrorist-supporting regime. He seems in his haste to have failed to appreciate that the US Air Force’s regional base is in Qatar. Qatar is also important, because there is evidence that Syria was destabilised after Assad refused to permit a LNG-pipeline from Qatar to Europe to cross Syrian territory.

All this seems set to increase regional demand for physical gold.