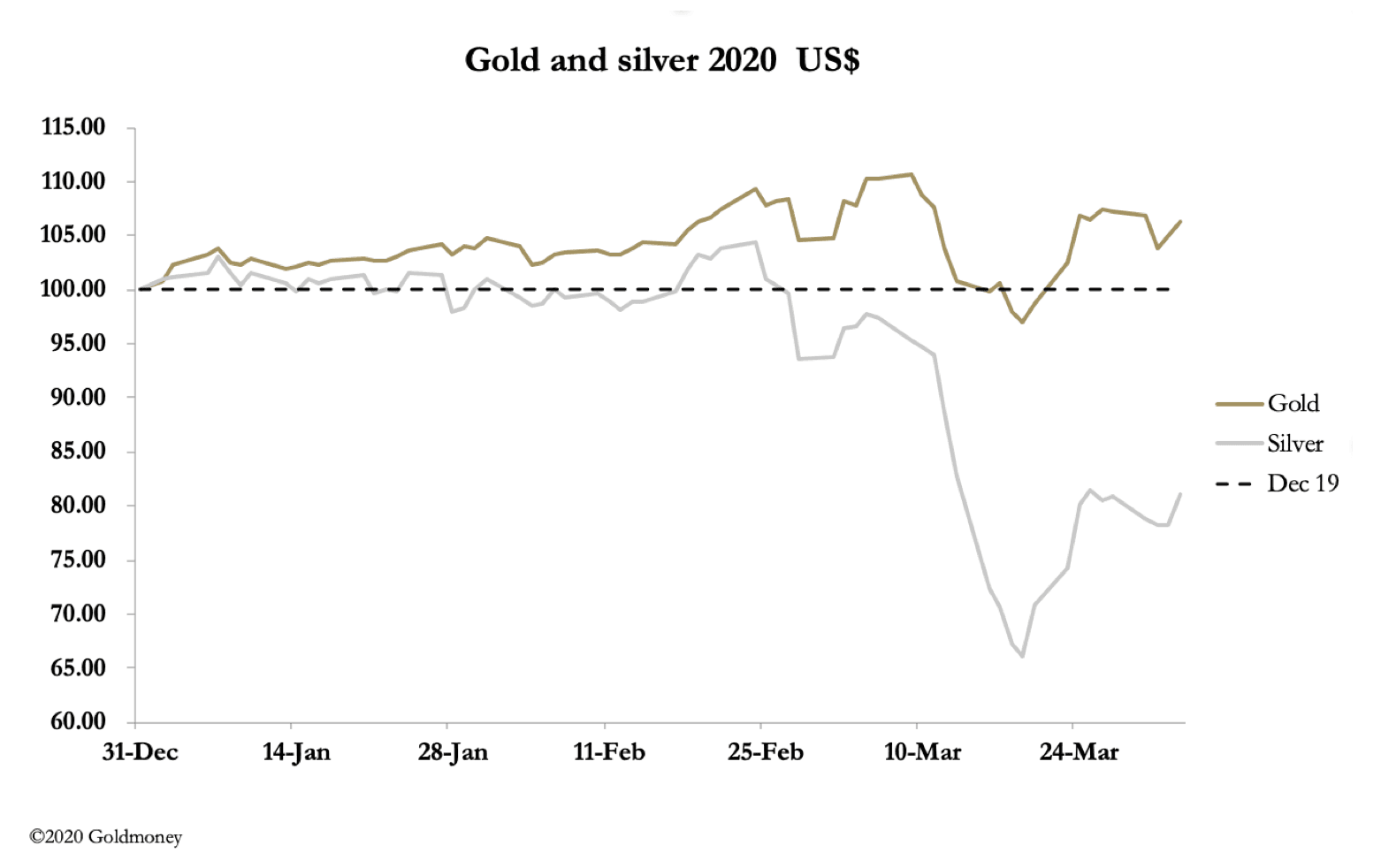 This was a week of continuing confusion for markets in gold and silver futures, being disconnected from indicated physical prices outside the financial system, where there is no stock at current price levels. Gold fell by $12 from last Friday’s close to $1611 in early European trade this morning, but silver was unchanged at $14.43. Turnover on Comex has declined to very low levels with the dramatic fall in open interest; almost as if it is shutting down.

Clearly, conditions are extremely testing for bullion banks. Supplies of bullion are drying up with both important mines and refiners in lockdown due to the coronavirus. The logistics of bullion transport are also confining. Meanwhile, evidence of global economic distress is mounting, and the response by governments is hyperinflationary. It is not a time to be caught short of gold or silver.

The financial establishment’s response has been to just steamroller over reality. Our next chart shows how dramatically the policy has worked for Comex’s gold contract.

Normally, the price and open interest move roughly in the same direction. But open interest has declined by 310,000 contracts since January, while despite wild gyrations, the gold price is up on balance. Translation: the usual tactic deployed by bullion banks to recover their shorts by working in concert to destabilise the speculators has failed badly.

The tactic did work better for silver, which is our next chart.

The collapse in open interest from all-time highs to the lowest level seen for years was accompanied by a fall in the silver price, which was equally dramatic. The reason the knockdown in silver was successful is the focus has been entirely monetary and directed at gold.

However, the bullion banks are still very short of gold, as our next chart of the swap category’s net position shows. 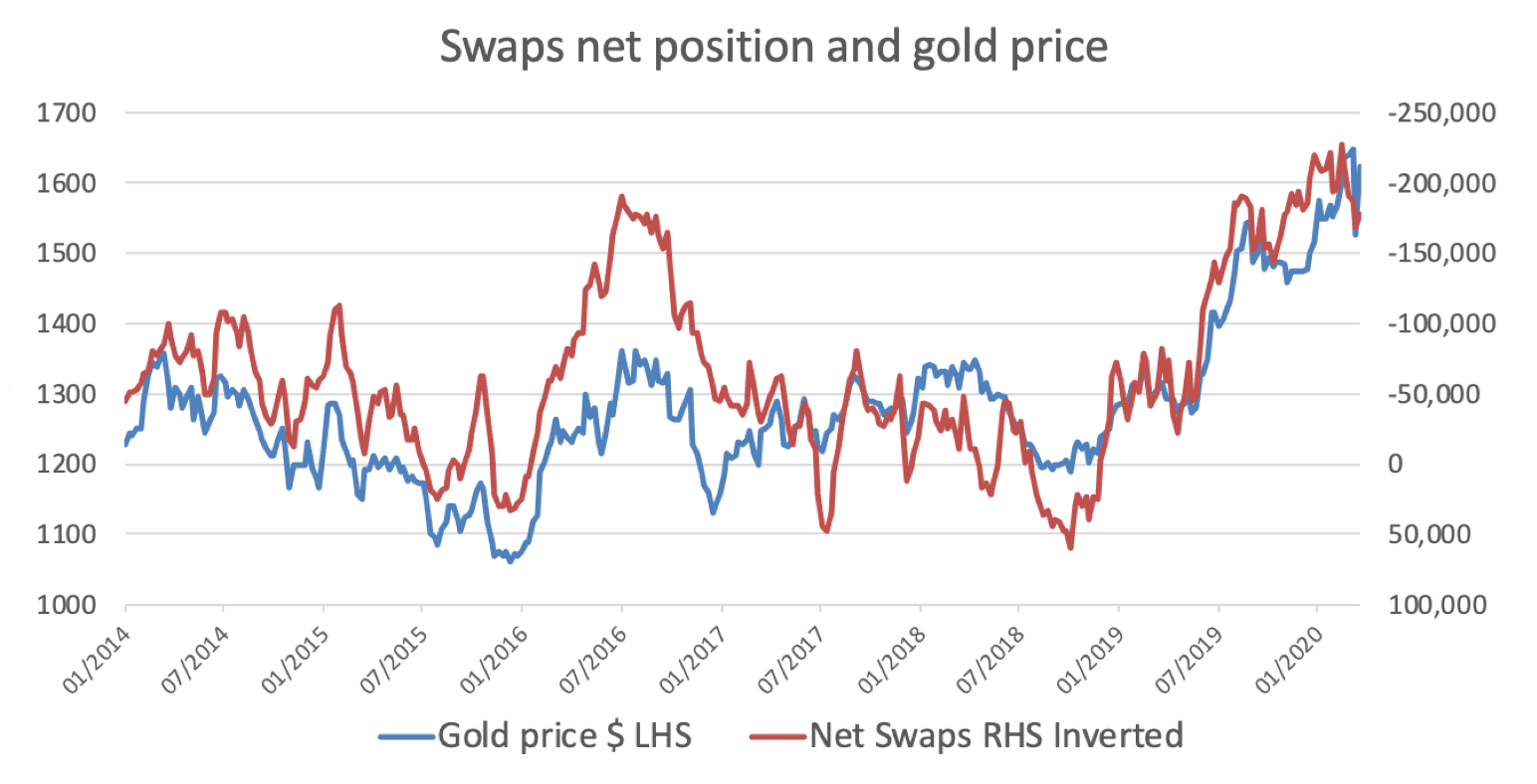 Swap counterparties can be speculative traders or hedge funds. In other words swaps operate as market makers. Their net short position as of 24 March (we will get an update for 31 March tonight) was still extremely high, at 177,000 contracts. If there is a canary in this contract’s coal mine, this must be it.

Back in the real world of physical bullion, general public demand indicates true prices for gold and silver are significantly higher than that recorded on Comex. The disparity is increasingly unlikely to be fixed in favour of paper gold, particularly when everybody now knows that all the major currencies are on the verge of hyperinflating.

Attempts to cool the situation are falling on deaf ears. The LBMA has posted press releases claiming there’s plenty of gold in London vaults, a statement that is economical with the truth because it includes earmarked monetary reserves at the Bank of England, ETF allocated gold and other allocated gold for individuals and other non-trading entities. The true float is likely to be less that 1,000 tonnes, compared with the LBMA’s claim of over 8,000 tonnes.

This, and other positive spins, such as reports the Swiss refiners in Ticino are hoping to restart refining soon, indicate institutional panic. Even the Russian central bank publicly stated it was withdrawing from the market, but that may be due to a general shortage of dollar liquidity from lower oil prices.