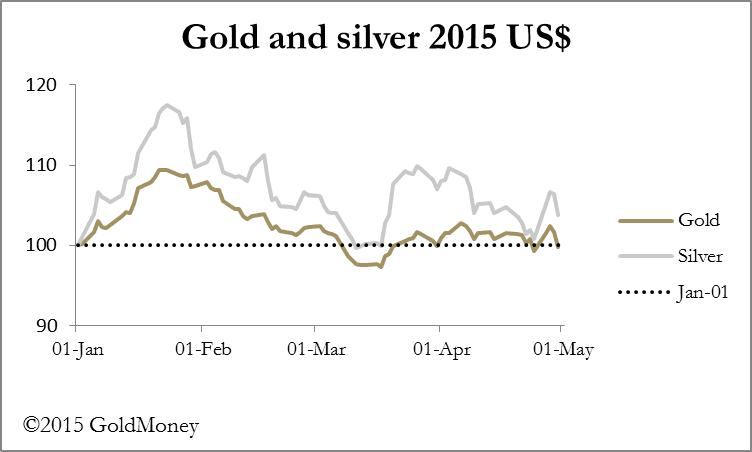 These higher prices on Wednesday proved to be the peak for both metals, before they fell back sharply yesterday (Thursday) on better than expected US initial jobless claims. The Federal Open Market Committee's (FOMC) minutes, which admitted the US economy is softening, had little effect when released yesterday.

We can be fairly sure the rise in the gold price on Monday and Tuesday was due to bears being squeezed, because Open Interest on Comex fell some 18,000 contracts, with the biggest drop on Monday when the market was at its strongest. If instead Open Interest had increased on rising prices it would have signalled that buyers are opening new positions; but this was clearly not the case, and the next chart illustrates this very clearly. 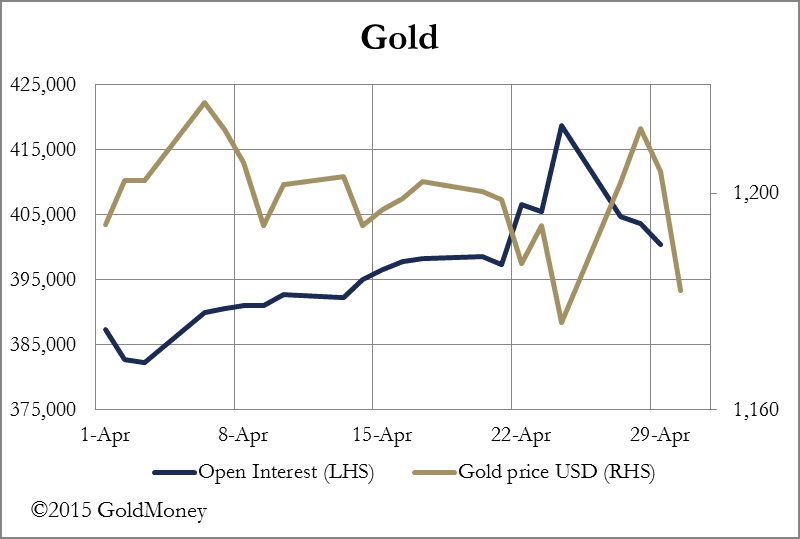 The market-makers on Comex would have been fully aware that there were weak hands short of gold contracts and susceptible to being squeezed. Equally, having successfully sold these nervous bears some expensive contracts on this squeeze the market makers had every incentive to mark prices down subsequently, so that they can book profits and show a favourable price (to them) on a mark-to-market basis at the month end. And this is precisely what happened.

The pattern in silver differed slightly, because this less liquid market has a larger element of bulls and bears taking more entrenched positions, but the same pattern can be seen. 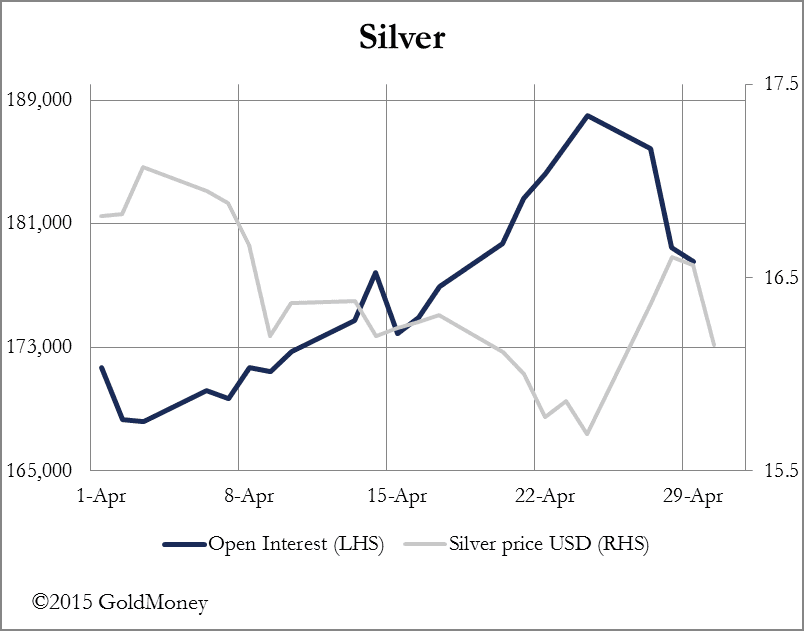 In silver's case Open Interest had run up to record highs before last week while the price was falling. Buyers (mostly commercial users of the metal) were obviously taking the opportunity of lower prices to add to their positions. If you are buying for commercial reasons you are a more solid player than the hedge funds evident in the gold market.

However, the Commitment of Traders Report disclosed that the hedge funds' short positions in silver had increased by nearly 15,000 contracts (75 million ounces) last month, presumably on the basis that this was a geared play on shorting gold. So it was those weak hands that were squeezed into closing their positions this week, with the serious buyers stepping back.

This action appeared to be at odds with the sudden unwinding of long US dollar positions, leading to the dollar falling significantly. The weakening dollar was actually consistent with a subdued statement from the FOMC, the conclusion from which must be that interest rate rises are to be delayed further, possibly until next year. The long-term inflationary effect and the benefit to precious metals prices are being ignored for the moment.

Given that the highly technical nature of trading this week is now coming to an end with the commencement of a new month, there is reason to hope that the futures markets for gold and silver might respond more to fundamental factors, including growing political uncertainties in Europe, over the coming weeks.