Market Report: Attrition for the bears

Since President Trump won the Presidency, the dollar has risen strongly, but doubts are now entering investor’s minds. 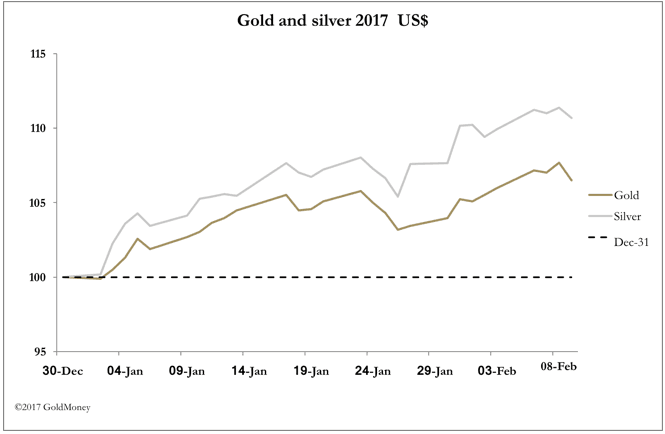 In the first three days of this week, precious metal prices rose, before running into a minor correction yesterday (Thursday). The net result is gold is little changed on the week from last Friday’s close at $1223 in early European trade this morning, and silver up just a few cents at $17.58.

Since the December lows, gold is up almost $100. From 1st January it is up 6.5%, and silver 10.6%. Technical analysts have been badly whipsawed, so they will be changing their minds, particularly when they consider our next chart, which includes commonly-used moving averages. 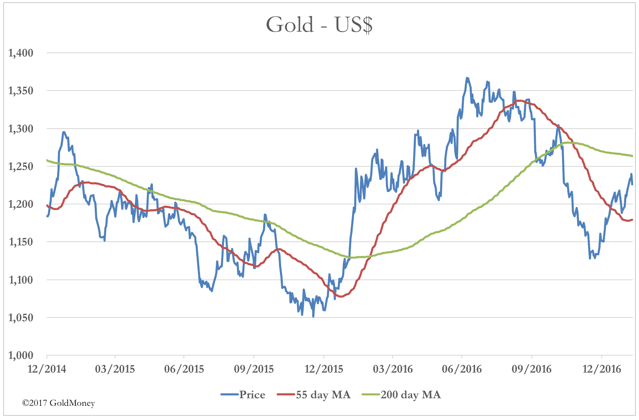 After a small tick-back towards support on the 55-day moving average, the gold price has continued its rally towards the 200-day moving average, currently at about $1260. At that point, some technical selling is likely, perhaps leading to a more serious consolidation towards support on the 55-day MA. If that doesn’t hold, it will be a signal that gold is still in a bear market and heading on down. This is the Gospel according to technical analysts.

We must not forget it is also the Gospel that mislead them, and now that fundamentals are unfolding, there is a much better explanation of what is moving the gold price. Let’s consider it from the point of view of the smart money.

Since President Trump won the Presidency, the dollar has risen strongly, but doubts are now entering investor’s minds. The idea that a Trump stimulus on top of a moderately expanding US economy is a good thing, is being replaced with concerns about the inflation outlook. Furthermore, Trump’s threats on international trade appear to be designed to increase industrial investment in the US, likely to drive prices higher still. For example, a high-level Japanese delegation led by Prime Minister Abe is at this moment in the US making concessions over future Japanese investment to appease the Americans over currency manipulation. Being highly Keynesian, the Japanese believe a weak yen is vital to promote economic growth, and they are likely to give almost anything away to continue with this policy.

The broader message for markets is that Trump wants a weaker dollar, and he has now attacked Germany, Japan and China, accusing them of suppressing their currencies. This is what the smart money is seeing, and we now find it accumulating physical gold. US hedge funds, central banks, and presumably sovereign wealth funds at the margin are now net buyers, as well as the ordinary people in countries like Germany, whose parents and grandparents have seen currency destruction before. It only takes net ETF demand of less than a few tonnes a day to upset the delicate balance that is the gold price.

To the list of concerns can be added the growing likelihood of a re-run of the 1998 SE Asia financial crisis. You only have to travel around the cities in that region to get a flavour of the credit bubble today, and how that is likely to end in a repeat event. It is also the region where old money learned the lesson of yesteryear, that a regional crisis collapses local currencies, and a wise person buys gold.

For now, that has yet to happen, but one can see more clearly the path towards this, the crisis that could come out of nowhere. It’s the sort of thing that happens when a maverick leader starts throwing his weight around on the other side of the Pacific Ocean.