On October 6, GoldMoney posted my podcast with Robert Wenzel of EconomicPolicyJournal.com. In that podcast, Wenzel expressed concern about the future inflationary implications of the build-up of excess reserves on the Federal Reserve’s balance sheet. Excess reserves represent balance sheet cash parked at the Federal Reserve Board by commercial banks.

Being the banks’ own money, they can gear up their balance sheets on it whenever they choose to do so. However, putting aside the gearing potential of excess reserves, we should at least treat it as cash, despite it being regarded as out of public circulation. There is therefore a strong case for it to be included in the True, or Austrian Money Supply quantity.

TMS is basically cash plus instantly encashable accounts. The chart below is of TMS plus excess deposits at the Fed from 1960 to the present day. 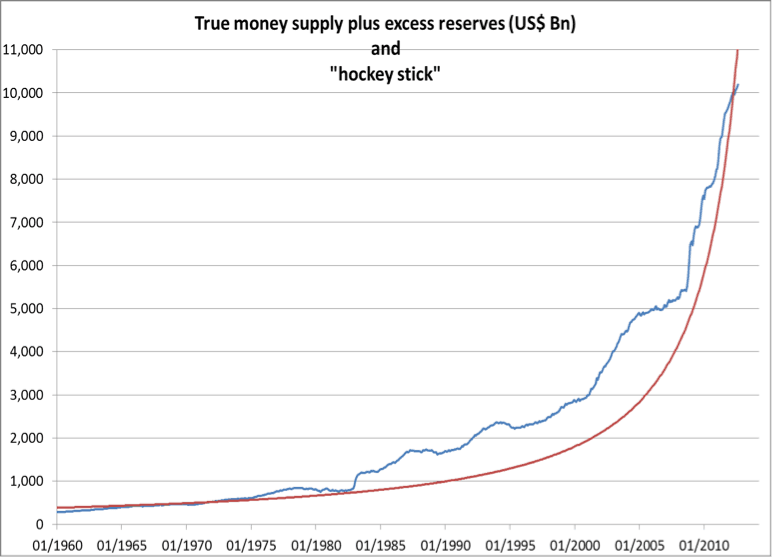 Worryingly it conforms to a hyperbolic curve, which is already going vertical in the fashion of a hockey-stick. Where this measure of money has deviated from the hyperbola it has done so by increasing faster than the hyperbola itself. But if it had not been for the creation of a new class of money market deposit accounts in December 1982 together with the Super NOW accounts a month later, it would have followed the hyperbola almost exactly. These new accounts represented a sudden transfer of money from broader money to TMS, and similarly, other deviations from the hyperbolic trend can be often attributed to swings of money to and from broader monetary measures.

Not surprisingly, the pace of money creation is now having difficulty in keeping up with the hyperbola, which today is accelerating at over $300bn per month. Not even the Fed’s creative powers with QE3 of $85bn per month can keep up with it.

But does it have to? An accelerating monetary trend is basically an indication that ever-greater amounts of money are required to achieve a monetary objective; we normally associate such a curve with a collapse in purchasing power of the money involved; but so far this is not happening. In this case it simply indicates the increasing amounts of money required to fund government obligations and to keep multiple market bubbles from deflating. The effect on prices for goods comes later.

We can be sure the Fed doesn’t want to look at things this way; but now that the increase in TMS plus excess reserves is beginning to lag behind the curve, it indicates that monetary policy is failing. Alternatively, it shows the difficulty for monetary policy alone to rescue us from our economic ills.

Confirmation of this alarming discovery is to be found in the chart below, which is of gold from 1900 onwards, and has its own hyperbola. I first published this chart, which was sent to me by an astute reader, last December. 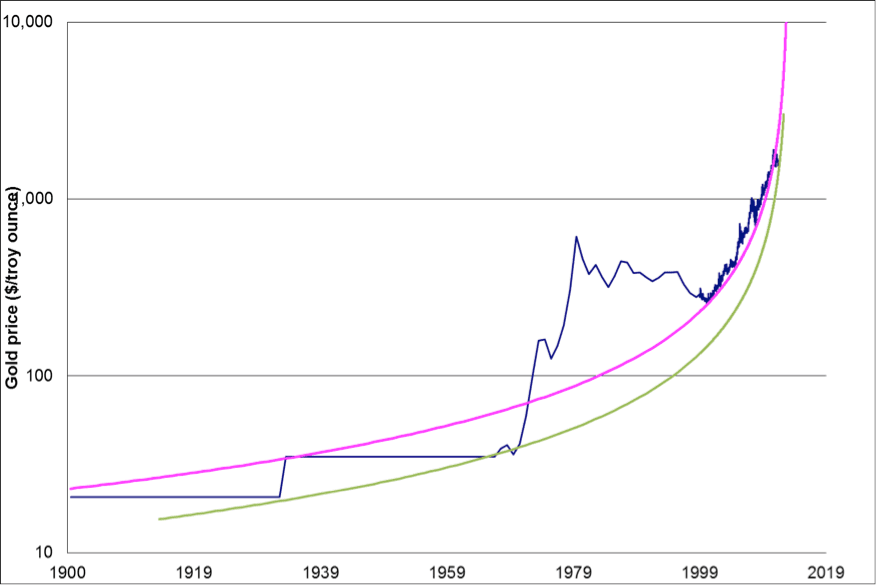 The green hyperbola is the lower bound, established by the Roosevelt devaluation in 1934, the failure of the London gold pool in 1968, and the end of the recent price consolidation this year. The blue hyperbola was shown on the original chart, and together they represent confirmation of the ultimate collapse of paper money.