Market Report: A pause in the decline 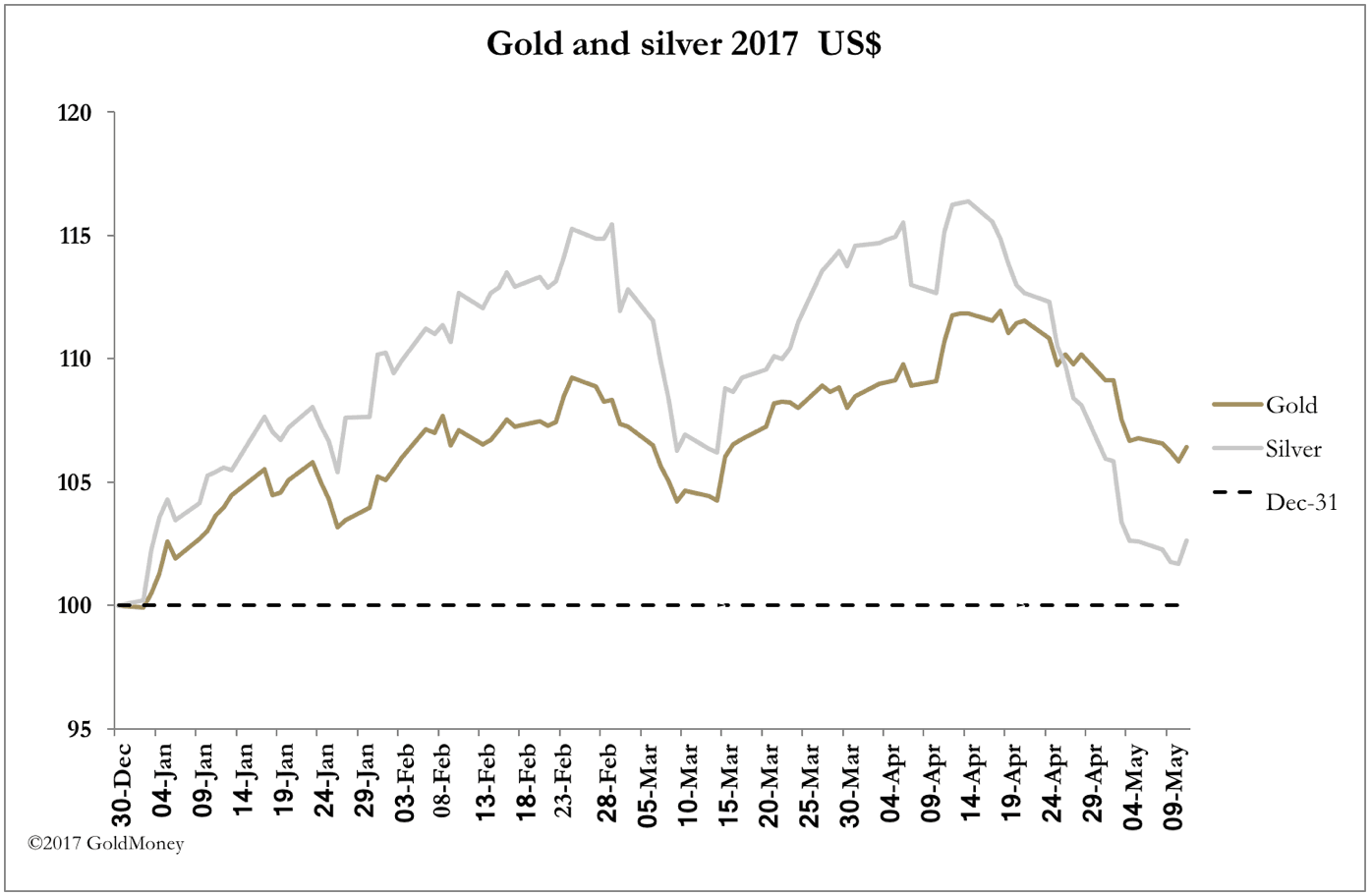 Gold and silver found temporary bottoms this week, with gold little changed from last Friday’s close of $1229.4 at $1228 in early European trade this morning (Friday). Silver fared slightly better, rising from $16.34 to $16.45 over the same time scale. However, the recent fall in silver has been very dramatic, the price now only up 2.6% on the year, compared with gold, up 6.4%.

Consequently, the gold/silver ratio is back to 75 again, as shown in our second chart. 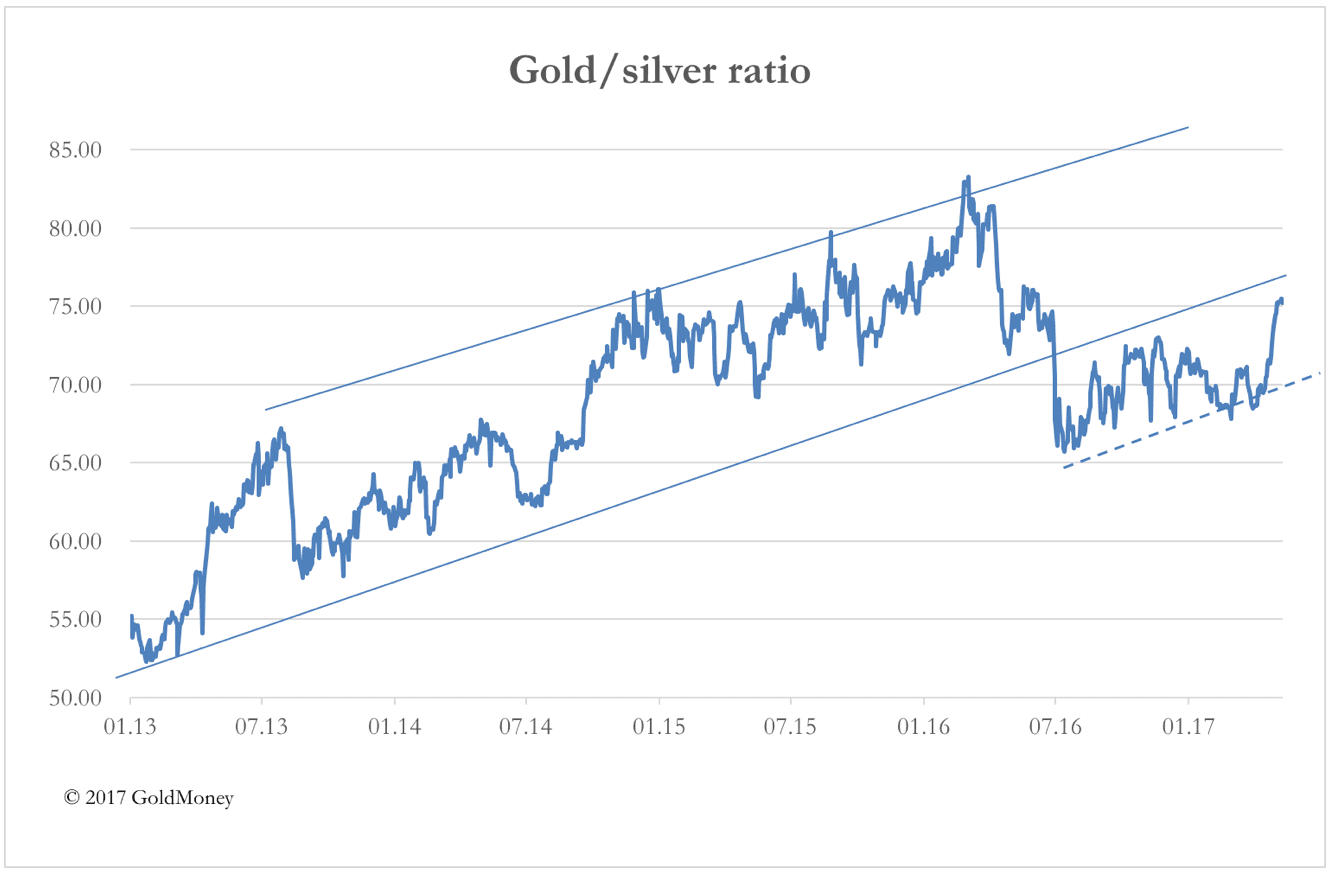 Traders will be looking to see if the lower trend line of the long-term channel, which the ratio broke last summer, provides resistance to a further rise.

Chartists will be more concerned with what appears to be an established bear trend for gold, with the price and the two most watched moving averages all falling in bearish sequence. This is our next chart. 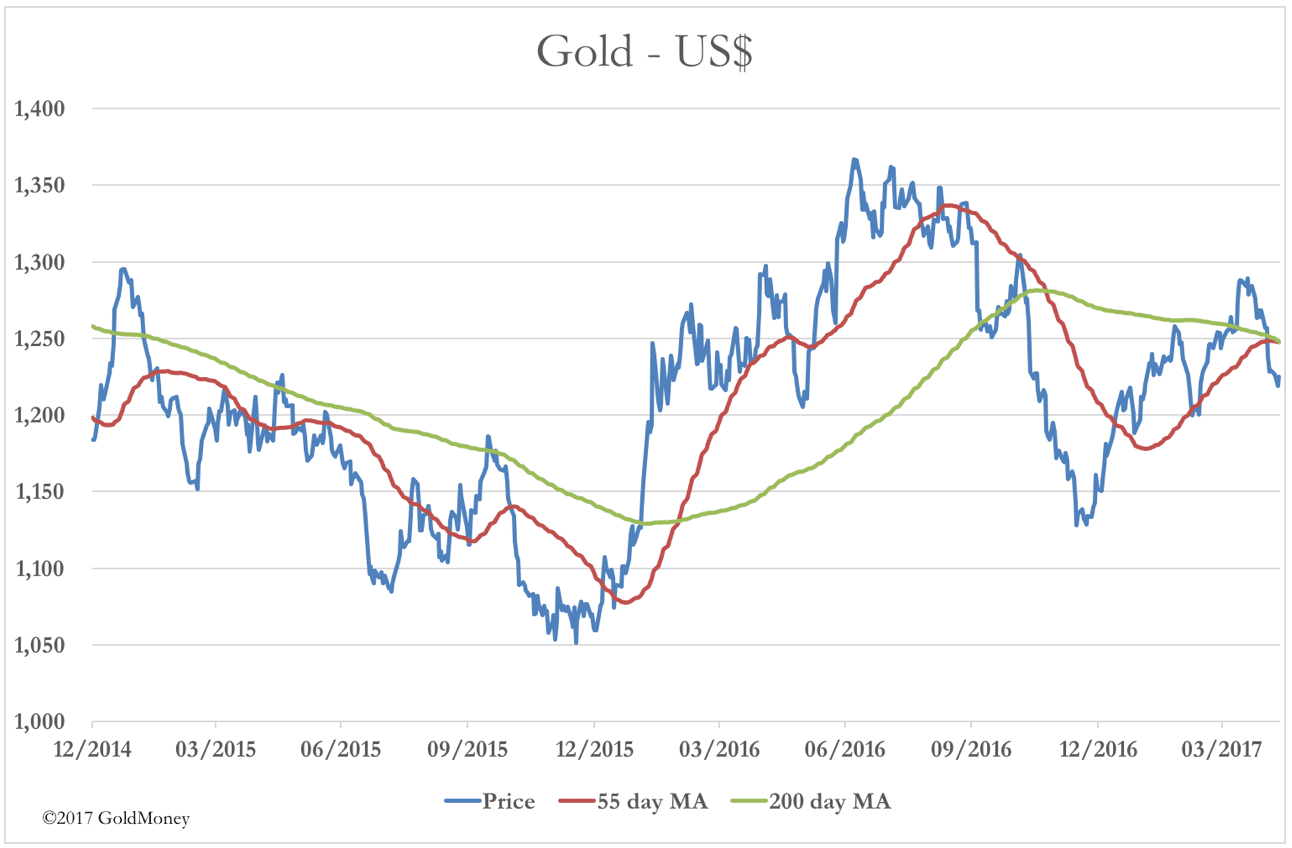 Technically, this is a powerful sell signal, though chartists will admit that the signals here are often late, with much of the downtrend over. They will also admit that for anything to fall for fifteen trading sessions without a reasonable countertrend rally is unusual, and warn short-term traders to expect a rally in gold towards $1250.

Out of date commitment of traders reports for gold and silver do not yet indicate oversold conditions, though this is likely to be revised on the figures for last Tuesday, due to be released later today. However, the level of open interest suggests gold and silver are somewhat oversold, but not dramatically so. This, for gold, is shown next.

Open interest has fallen to the lower levels seen in recent years, and close to the level seen last December.

An alternative view of Comex trading is the bullion banks have managed to reduce their short positions somewhat, but are having difficulty closing them all. With geopolitical risk, demand for physical bullion from Asia increasing at current prices, and the dollar outlook uncertain, the bullion banks preferred position must be to level their books. The shake-out of base metals in China (mentioned in last week’s market report) has been their opportunity, which won’t last for ever.

It is that shake-out which has undermined silver so dramatically. Will it ever end? Yes, because China is punishing wealth management products in the private sector for front-running officially-sanctioned purchases of industrial materials. China is almost certainly taking the opportunity to buy needed raw materials at these lower prices, to satisfy here economic ambitions.

This is what confounds the chartists. Market prices are driven by greater factors than investor sentiment reflected in charts. Furthermore, shortages of bullion, due to value buyers in the central banks, and Asians who view gold and silver as money, always ends up spoiling the Comex party.

However, a final challenge at $1200 for gold is certainly possible, which is a level of historic support on Comex. Timing? If the bullion banks have their way, it could continue to the end of June, when their half-yearly books are closed.