One of the joys of interviewing some of the best brains in the world of finance and economics is that they alert you to important factors that perhaps you haven’t fully considered. This was my experience with Chris Martenson in Madrid last week (the interview will be posted on the GoldMoney website in the coming weeks). He reminds us that the availability and price of oil are central to our economic future.

The basic argument is this: very little can happen in our lives without oil. It is required for mining, agriculture, manufacturing, transport and distribution. Global consumption is rising, and extraction has levelled off. Oil-exporting nations are consuming more, leaving smaller balances for those with oil deficits. The cost of extraction is rising sharply: whereas fifty years ago it cost one barrel of energy to extract a hundred, we are moving towards new fields where the rule is one barrel for three. We face a train-wreck between the increasing rates of global consumption and the declining rates of net exportable production.

We are familiar with this story, but most of us underestimate its importance, so it is worth repeating. The chart below (which is based on statistics from BP’s Statistical Review of World Energy 2011) sums up the problem. 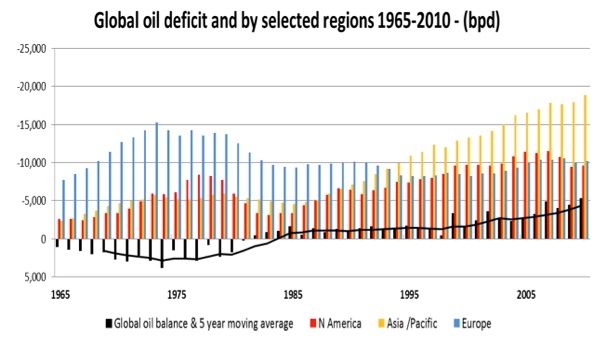 The black line is the five-year moving average of the balance between annual production and consumption, represented by the black columns. The last year of production surplus was 1981, thirty years ago, and since then the world has drawn down on strategic stockpiles and inventory to meet consumption demand, at a trend rate that is now accelerating. The blue columns represent the European balance, which has benefited from North Sea oil and which is now running out. The red columns represent North America and Mexico, whose production has been deteriorating since 1984. But most frightening is the Asia/Pacific deficit, the yellow columns, which has soared over the last twenty years.

The chart clearly shows a picture of an imbalance between production and consumption that cannot continue much longer. The world is now caught between inflexible demand – because oil is vital to our very existence – and declining net production. This explains the oil price, which is the blue line in the second chart (I shall comment on gold in a moment). 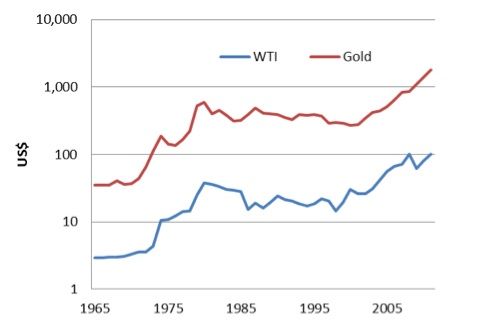 There have been three phases: the first, when OPEC jacked up the price of oil; the second when more expensive non-OPEC fields came on stream putting a cap on prices, and finally the third, where prices have increased seven times so far. It is this third trend, from which there is no apparent escape. The chart is on a logarithmic scale, which means that prices have been rising at an exponential rate since 1998.

With the production/consumption imbalance set to deteriorate further, there can be only one result, and that is considerably higher prices. Based on BP’s statistics, which show that the world’s most vital commodity has been in a supply deficit for the last thirty years, the logical outcome is a price explosion. And with quantitative easing in the markets there will be extra money to pay higher prices, the consequences for global price inflation do not bear thinking about. On this evidence we can therefore confirm Chris Martenson’s analysis.

Living with an energy supply crisis will require a radical change in our lifestyles – downwards. The best financial protection from this event appears to be physical gold, which has tracked the price of oil reasonably well over the years as shown in the second chart, and can be expected to continue to do so. After all, the combination of the most rapid global monetary expansion in peace-time history and soaring oil prices is an inflationary disaster in the making.