2014 ended with two ominous developments: the strength of the US dollar and a collapse in key commodity prices.

It is tempting to view both events as one, but the continuing fall in oil prices through December reveals they are sequential: first there was a greater preference for dollars compared with other currencies and this still persists, followed by a developing preference for all but the weakest currencies at the expense of raw materials and energy. These are two steps on a path that should logically lead to a global slump.

Dollar strength was the first warning that things were amiss, leading to higher interest rates in many of the emerging economies as their central banks sought to control investment outflows. Since this followed a prolonged period of credit expansion these countries appear to be entering the bust phase of the credit-driven boom-and-bust cycle; so for them, 2015 at a minimum will see a slump in economic activity as the accumulated malinvestments from the past are unwound. According to the IMF database, emerging market and developing economies at current prices account for total GDP of over $30 trillion, compared with advanced economies' GDP totalling $47 trillion. It is clear that a slump in the former will have serious repercussions for the latter.

As the reserve currency the dollar is central to the exchange value of all other currencies. This is despite attempts by China and Russia to trade without it. Furthermore and because of this dependency, the global economy has become more geared to the dollar over the years because it has expanded relative to the US. In 2000, the US was one-third of global GDP; today it is about one-fifth.

The second development, falling energy and commodity prices, while initially driven by the same factors as dollar strength, confirms the growing likelihood of a global slump. If falling prices were entirely due to increased supply of the commodities involved, we could rejoice. However, while there has been some increase in energy and commodity supply the message is clear, and that is demand at current prices has unexpectedly declined, and prices are now trying to find a new equilibrium. And because we are considering world demand, this development is being missed or misread by economists who lack a global perspective.

The price of oil has approximately halved in the last six months. The fall has been attributed variously to the west trying to bankrupt Russia, or to Saudi Arabia driving American shale production out of business. This misses the bigger picture: according to BP's Statistical Review 2014, at the beginning of last year world oil consumption comfortably exceeded supply, 91.3million barrels per day compared with 86.8. This indicates that something fundamental changed in 2014 to collapse the price, and that something can only be a sudden fall in demand in the second half.

Iron ore prices have also halved over the last six months, but other key commodities, such as copper which fell by only 11% over the period, appear to have not yet adjusted to the emerging markets slump. This complies with business cycle theory, because in the early stages of a slump businesses remain committed to their capital investment plans in the vain hope that conditions will improve. This being the case, the collapse in demand for energy can be expected to deepen and spread to other industrial raw materials as manufacturers throw in the towel and their investment plans are finally abandoned.

Therefore the economic background to the financial outlook for the global economy is not encouraging. Nor was it at the beginning of 2014, when it was obviously going to be a difficult year. The difference a year on is that the concerns about the future are more crystallised. This time last year I wrote that we were heading towards a second (to Lehman) and unexpected financial and currency crisis that could happen at any time. I only modify that to say the crisis has indeed begun and it has much further to go this year. This is the background against which we must briefly consider some of the other major currencies, and precious metals.

Japan and the yen

The complacency about Japan in the economic and investment communities is astonishing. Japan is committed to a scale of monetary inflation that if continued can only end up destroying the yen. The Bank of Japan is now financing the equivalent of twice the government deficit (¥41 trillion) by issuing new currency, some of which is being used to buy Japanese equity ETFs and property REITs. By these means pricing in bond, equity and commercial property markets has become irrelevant. "Abenomics" is about financing the government and managing the markets under the Keynesian cover of stimulating both the economy and animal spirits. In fact, with over ¥1.2 quadrillion of public sector debt the government is caught in a debt trap from which it sees no escape other than bluff. And since Abenomics was first embarked upon two years ago, the yen has fallen from 75 to the US dollar to 120, or 37%.

Instead of learning the lessons of previous hyperinflations, mainstream economists fall for the official line and ignore the facts. The facts are simple: Japan is a welfare state with an increasing and unsustainable ratio of retirees to tax-paying workers. She is the leading advanced nation on a debt path the other welfare nations are closely following. Consensus forecasts that the Japanese economy will be stimulated into recovery in 2015 are wide of the mark: instead she is destroying her currency and private sector wealth with it.

Eurozone and the euro

In the short-term the Eurozone is being revisited by its Greek problem. Whether or not the next Greek government backs off from confronting the other Eurozone members and the ECB remains to be seen. The problems for the Eurozone lie considerably deeper than Greece, made worse by politicians who have been reluctant to use the time bought by the ECB to address the structural difficulties of the 19 Eurozone members. The result is the stronger northern bloc (Germany, Netherlands, Finland and Luxembourg) is being crippled by the burden of the Mediterranean states plus Portugal plus France. And Germany and Finland have suffered the further blow of losing valuable export business from Russia.

In the coming months the Eurozone will likely face gas shortages from Russia through the trans-Ukrainian pipeline, and price deflation driven by energy and other commodity prices. Price deflation spurs two further points to consider, one false and the other true: lower prices are deemed to be recessionary (false), and falling prices increase the burden of real debt (true). The consequence is that the ECB will seek ways to expand money supply aggressively to stop the Eurozone from drifting into an economic crisis. In short, the Eurozone will likely develop its own version of Abenomics, the principal difference being the Eurozone's timeline is behind Japan's.

Japan and the Eurozone account for total GDP of $18.3 trillion, slightly more than the US and added to the emerging and developing economies, gives a total of $48 trillion, or 62% of global GDP for nations leading the world into a slump. So when we consider the prospects for the US and the UK, together producing $20.4 trillion or 26% of the world's GDP, their prospects are not good either. The UK as a trading nation exposed to the Eurozone has immediate risk, while the US which is not so dependent on international trade, less so.

The foregoing analysis is of the primary economic drivers for 2015 upon which all else will ultimately depend. The risk of a global slump can be called a first order event, while the possibility of a banking crisis, derivatives default or other market dislocation brought on by a slump could be termed a second order event. There is no point in speculating about the possibility and timing of second order events occurring in 2015, because they ultimately depend on the performance of the global economy.

However, when it becomes clear to investors that the global economy is indeed entering a slump, financial and systemic risks are certain to escalate. Judging this escalation by monitoring markets will be difficult because central banks, exchange stability funds and sovereign wealth funds routinely intervene in markets, rendering them misleading as price signals.

Precious metals are the only assets beyond the long-term control of governments. They can distort precious metal markets in the short term by expanding the quantity of derivatives, and there is a body of evidence that these methods have been employed in recent years. But most price distortion today appears to have come from bullion and investment banks who are fully committed to partying in bonds, equities and derivatives, and for which gold is a spoiler. This complacency is bound to be undermined at some point, and a global economic slump is the likely catalyst.

The dangers of ever-inflating currencies are clearly illustrated by the Fiat Money Quantity, which has continued to expand at an alarming rate as shown in the chart below. 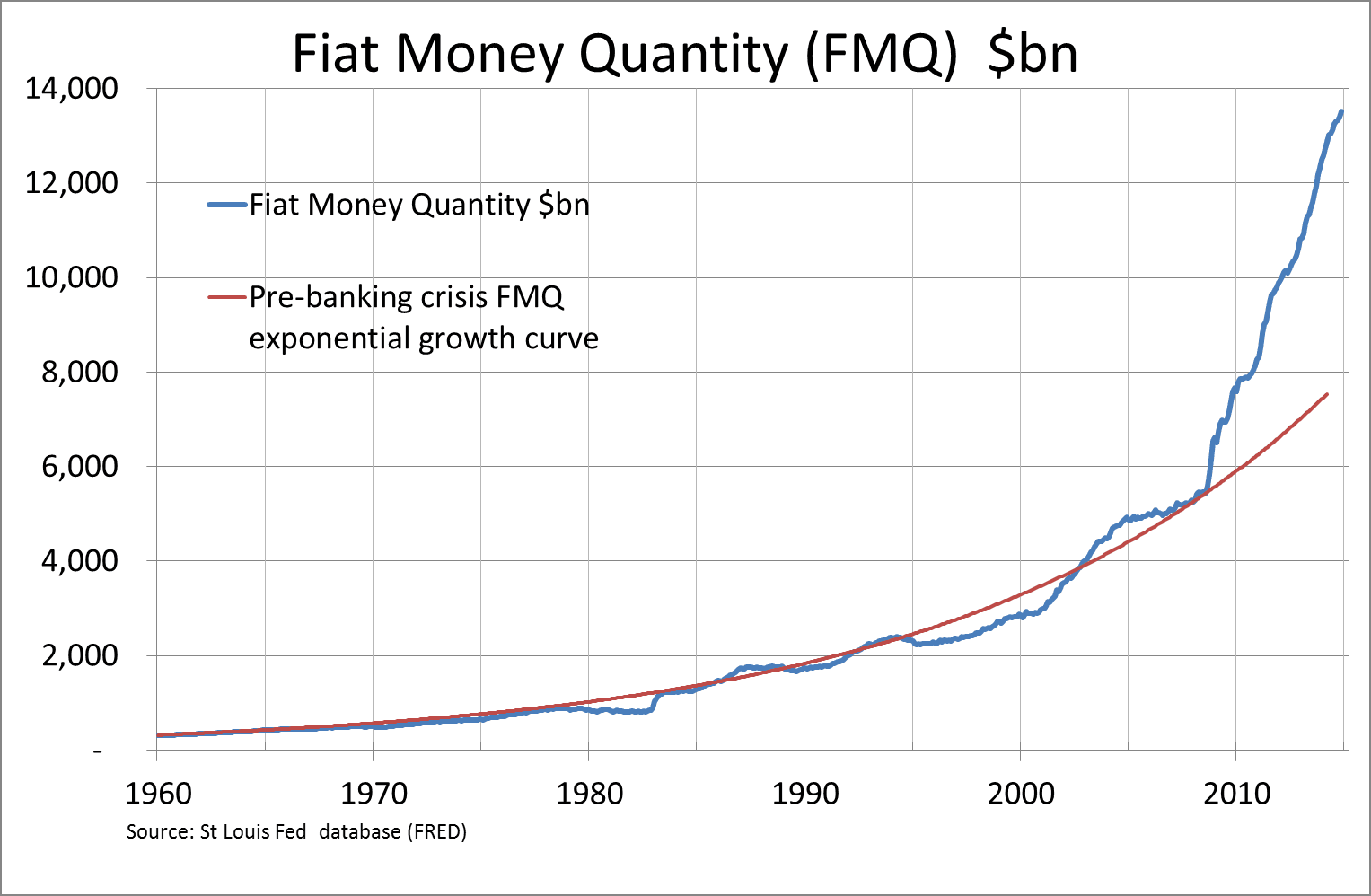 FMQ measures the amount of fiat currency issued as a replacement for gold as money, so is a measure of unbacked monetary expansion. At $13.52 trillion last November it is $5.68 trillion above the long-established pre-Lehman crisis growth path, stark evidence of a depreciating currency in monetary terms. Adjusting the price of gold for this depreciation gives a price today the equivalent of $490 in dollars at that time and quantity, so gold has roughly halved in real currency terms since the Lehman crisis.

There is compelling evidence that 2015 will see a global slump in economic activity. This being the case, financial and systemic risks will increase as evidence of the slump accumulates. It can be expected to undermine global equities, property and finally bond markets, which are currently all priced for economic stability. Even though these markets are increasingly controlled by central bank intervention, it is dangerous to assume this will continue to be the case as financial and systemic risks accumulate.

Precious metals are ultimately free from price management by the state. Furthermore, they are the only asset class notably under-priced today, given the enormous increase in the quantity of fiat money since the Lehman crisis.

In short, 2015 is shaping up to be very bad for fiat currencies and very good for gold and silver.